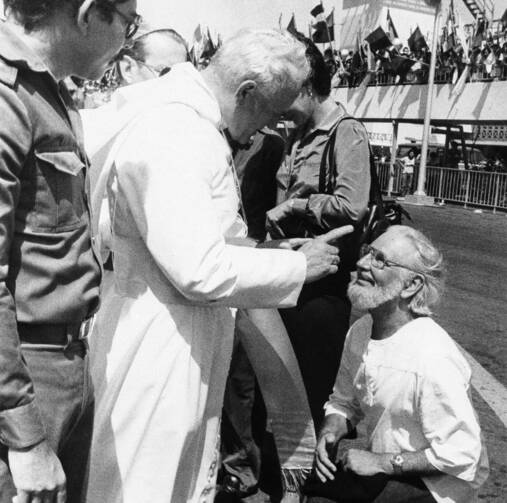 Probably the most famous image of Ernesto Cardenal, the Nicaraguan priest, poet, mystic and revolutionary, who died on March 1, 2020, at the age of 95, came when Pope John Paul II visited Managua in 1983. Cardenal, wearing his trademark peasant blouse, doffed his black beret, knelt on the tarmac and attempted to kiss the pope’s ring.

At the time, Cardenal was one of four priests, including his brother, Jesuit Fernando Cardenal, serving in the revolutionary Sandinista government. Cardenal believed his service as minister of culture was an extension of his priestly office, but the pope disagreed. He dramatically wagged his finger at Cardenal and told him to “regularize” his situation.

It was a foretaste of the rest of the pope’s trip. He made no secret of his opposition to the Sandinista government, with its claim to integrate Christian and Marxist ideals, and his disapproval of those Christians, like Cardenal, who saw in the Nicaraguan revolution an opportunity to promote an “efficacious charity.”

When the priests in the government refused the pope’s demand that they quit their posts, they were deprived of their priestly faculties. In the case of Cardenal, this situation continued until last year, as his health rapidly declined, when Pope Francis granted him “absolution from all canonical censorships,” and he was able to celebrate Mass again for the first time in over 30 years.

In an earlier time, Cardenal had become famous for the liturgies he celebrated in the community of artisans and peasants he founded on the Nicaraguan archipelago of Solentiname. Following the Gospel readings, he would invite the peasants to share their own reflections on the text.

Thomas Merton wrote an introduction to Cardenal’s Vida en Amor: “In a time of conflict, anxiety, war, cruelty, and confusion, the reader may be surprised that this book is a hymn in praise of love.’”

During this time of the dictatorship of Anastasio Somoza, it was not hard for these peasants to see the parallels with Jesus’ message of good news to the poor and his confrontation with the corrupt powers of his own day. Cardenal recorded and published these dialogues as The Gospel of Solentiname (Orbis Books). As a window into similar reflections occurring in base communities throughout Latin America, these books became classics in the emerging literature of liberation theology.

The point was not lost on Somoza, who sent his National Guard to destroy the community. Many of the young campesinos took up arms and joined the Sandinista insurrection. They went with Cardenal’s blessing.

In his own youth, Cardenal had taken part in an abortive uprising against the dictatorship of the elder General Somoza. But afterward, his life took a different turn. In 1957, he entered the Trappist monastery of Our Lady of Gethsemani in Kentucky, where his novice master was none other than Thomas Merton. Two years later, for health reasons, he left the monastery. But his deep relationship with Merton continued.

Merton supported his decision to seek ordination in Nicaragua and encouraged Cardenal’s decision to start the experimental community in Solentiname. A volume of their correspondence shows just how deeply Merton identified with Cardenal, a fellow poet and mystic, and his dreams of pioneering a new model of monasticism. Merton himself dreamed of joining Cardenal. But that was not to be.

Over the past two years, as young people rose up in protest against the Sandinista government, Cardenal spoke out in their support. Sadly, the dispute with Ortega followed him to the grave.

Before he died, Merton wrote an introduction to a deeply lyrical book of reflections by Cardenal, Vida en Amor. (At Orbis Books, I later oversaw the publication of one of the English editions, Abide in Love.) Merton wrote, “In a time of conflict, anxiety, war, cruelty, and confusion, the reader may be surprised that this book is a hymn in praise of love, telling us that ‘all things love one another.’”

Those readers more familiar with Cardenal’s later support for a guerrilla insurrection may be especially surprised. Yet to the end of his life, Cardenal believed this work reflected his consistent effort to recognize God’s loving presence in nature, the cosmos and all dimensions of life.

As he wrote in the opening lines: “All things love one another. Everything in nature feels fellowship with all the rest. All living beings are in communion with each other.... The condensation of the snowflake is one with the explosion of a new star, a nova. The beetle clinging to its dung-dropping is one with the lover clinging to his nature.”

Those insights continued in books of poetry translated in many languages. But with the uprising against Somoza, Cardenal felt called to translate poetry into action on behalf of the poor and oppressed. In the Nicaraguan context, he wrote, “a nonviolent struggle is not practical.” Gandhi, he claimed, “would be in agreement with us.” Not everyone agreed.

Daniel Berrigan, S.J., for one, engaged in a heated exchange of letters with Cardenal, quoting a statement he had made to members of the anti-war left who were tempted by violence: “The death of a single human is too heavy a price to pay for the vindication of any principle, however sacred.”

Cardenal remained in his post until 1987. Three years later, following years of war with the Contras, the Sandinistas suffered an electoral defeat. Cardenal returned to Solentiname, resuming his poetry and continuing to promote the cause of the poor. But in 1994, along with his brother Fernando, he publicly broke with the Sandinista Party, protesting the increasingly authoritarian tendencies of its leader Daniel Ortega, who had returned to power. “I think an authentic capitalism would be more desirable than a false revolution,” he said.

Over the past two years, as young people rose up in protest against the Sandinista government, Cardenal spoke out in their support. Sadly, the dispute with Ortega followed him to the grave. Cardenal’s funeral Mass at Managua Metropolitan Cathedral on March 3 was disrupted by flag-waving Sandinista militants, who angrily denounced him as a traitor. Surely very few, if any of those who interrupted the Mass were alive 40 years ago when young men from Solentiname were killed in the insurrection or when this priest had to choose between saying Mass or keeping faith with the people’s cause.

I never met Ernesto Cardenal, though he played a mysterious part in my life. In 1976, soon after joining the Catholic Worker community, I was taking my turn writing thank you cards to the many contributors who supported the work. I was surprised to see that one of them was the famous priest-poet from Solentiname. I had read some of his poetry and wrote to express my particular appreciation for a poem he had written after Merton’s death.

To my surprise, he responded with a handwritten letter, urging me to “go up to Maryknoll” and look up his friend, the Rev. Miguel D’Escoto, the founder of Orbis Books. (D’Escoto would later join him as one of the priests in the revolutionary government, serving as foreign minister.) I did not actually follow this advice. But it was the voice of destiny.

Ten years later, I joined the staff of Orbis, where I have worked ever since, where I had further occasion to correspond with Father Cardenal, reissuing his books, as well as publishing the memoir of his brother Fernando, Faith and Joy: Memoirs of a Revolutionary Priest, published just before his death in 2016.

Learning of Ernesto’s death, I remembered Merton’s introduction to Abide in Love, in which he praised his former novice as one who pointed toward the renewal of the church in Latin America, a future in which Christians would someday combine temporal liberation “but also learn to sing hymns to life and love.” And that brought to mind the lines in the poem that Cardenal later addressed to his former novice master:

Beloved is the time of pruning,
All the kisses will be given that you could not give.
The pomegranates are in bloom
All love is a rehearsal of death.

Robert Ellsberg is the editor in chief and publisher of Orbis Books. He is the author of Blessed Among Us: Day by Day with Saintly Witnesses (Liturgical Press).