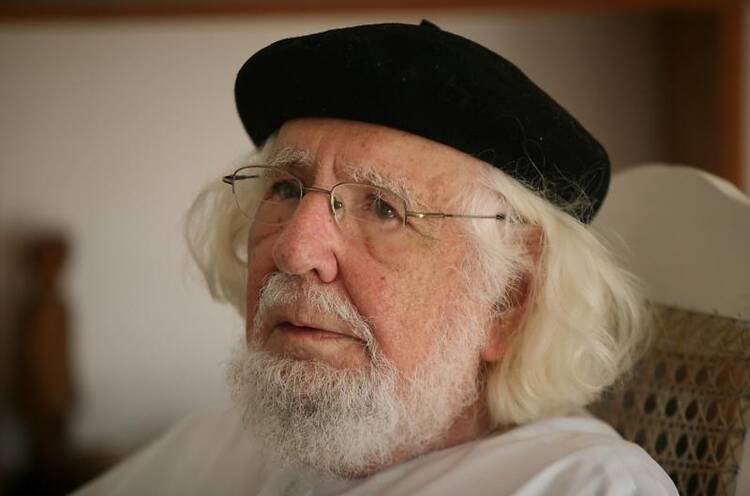 REYNOSA, Mexico (CNS) -- Father Ernesto Cardenal, the Nicaraguan poet and revolutionary whose political work earned him a public admonishment from St. John Paul II, died March 1 in the Nicaraguan capital of Managua. He was 95.

"He found, contemplated and loved Christ in the wonders of the cosmos, which he celebrated in his art, and in the people in need of compassion and liberation," said Jesuit Father Joseph Mulligan, who serves in Nicaragua. "He is remembered and celebrated as a kind person, humble, and somewhat shy, whose love for his people inspired him to be involved in the Sandinista-led insurrection against the Somoza dictatorship."

Father Cardenal was a critic of the Sandinistas under the increasingly corrupt and tyrannical rule of current President Daniel Ortega and suffered persecution for his opposition, said an acquaintance and others in Nicaragua interviewed by Catholic News Service. The priest quit the Sandinistas in 1994 because he said the party would not allow moderate voices to be heard.

Father Cardenal "wasn't very active, but he had broken away from the government and said that he felt persecuted ... and could not say much," said Father Carlos Avilez, spokesman for the Nicaraguan bishops' conference.

For its part, the Ortega government ordered three days of mourning for Father Cardenal, who Nicaragua media reported suffered from respiratory issues and died of heart failure.

"We recognize his contribution to the struggle of the Nicaraguan people," said a statement signed by Ortega and his wife, Vice President Rosario Murillo. "We also recognize his cultural, artistic and literary merits and his extraordinary poetry, in which he always knew how to praise God, in heaven, on earth and in any place."

Father Cardenal -- famed for his poetry, flowing white hair and beard and for wearing a black beret -- was born into wealthy Nicaraguan family, but gravitated toward liberation theology, along with revolutionary thought and activities. He participated in an unsuccessful attempt at ousting dictator Anastasio Somoza in 1954 and later joined the Sandinistas, who took power in 1979.

Father Cardenal joined the Sandinista government as culture minister, along with three other priests -- including his brother -- who assumed political positions. His political participation proved controversial for some in the church hierarchy, however, including the pope.

But the greeting -- captured in a famous photo of the pope wagging his finger at a kneeling Father Cardenal -- became an admonishment for the priest to "get right with your bishop," according to witnesses. Father Cardenal's permission to perform the sacraments was subsequently suspended, though reinstalled prior to his death.

"He struck me as very private, shy, intensely contemplative and attentive to everything happening in the world around him," said John Mooney, a former Jesuit priest who knew Father Cardenal since 2006 and was a member of small eucharistic community with him at Jesuit-run Central American University in Managua.

"In his comments during the shared reflections, he continued to believe strongly in authentic social revolution. He always spoke strongly against imperialism -- notably in the U.S. -- and the excesses of contemporary Western capitalism," Mooney said.

Father Cardenal studied literature in Nicaragua and at Columbia university in the 1950s, according to a New York Times feature. He later enrolled in seminary studies a Trappist monastery in Kentucky and was ordained upon returning to Nicaragua.

He promoted liberation theology and embraced Marxism. "Christ led me to Marx," he said in a 1984 interview.

His poetry was eclectic and touched on topics ranging from science to Scripture to Marilyn Monroe.

Auxiliary Bishop Silvio Jose Baez of Managua remembered Father Cardenal in a tweet, which read, "(He) now can sing his Psalm 15 before God: 'There is no joy for me apart from thee! I worship neither movie stars nor political leaders, and I worship no dictators.'"

David Agren - Catholic News Service
Show Comments ()
Join the conversation: Login or create an account
Before you can comment, you need to update your profile to include your first and last name, as required in our comments policy. Then reload this page and you'll be set up for commenting. Update your profile
Show Comments ()
Comments are automatically closed two weeks after an article's initial publication. See our comments policy for more.