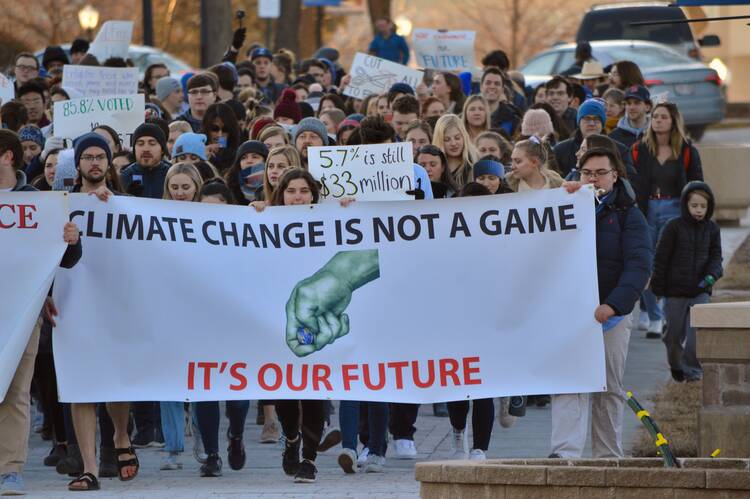 In response to sustained pressure from student climate activists and faculty members, Creighton University, a Jesuit institution in Omaha, Neb., announced on Feb. 18 in an email to the student body that it would reduce its “investment exposure to fossil fuel companies” to 5.7 percent of its investment portfolio—a 3.2 percentage point decrease. In a statement to the university community, Daniel S. Hendrickson, S.J., president of Creighton, said that the board of trustees plans to consider different divestment plans and their overall financial impact, while committing the university to investments in sustainability efforts.

Among the key objectives described by Father Hendrickson, the university intends to “improve [its] portfolio’s environmental, social, and governance score (ESG) over time,” as well as to “[c]ontinue to engage with peer universities and colleges to better understand investment assessment practices across similar institutions.”

The C.U. Climate Movement, which is not officially endorsed by Creighton University, sponsored a “march to the boardroom” on Feb. 20 to protest the university’s fossil fuel investments. According to Emily Burke, a senior at Creighton active in the climate movement, the march was attended by about 200 students.

Michael Galeski, a senior at Creighton and former chair of the student government’s Sustainability Committee, told America that the march was planned before the release of the Feb. 18 statement.

“What we wanted to do in this march was highlight some of the connections between our board of trustees and fossil fuel companies.” He explained that students had been directing their frustration on the matter at university officials but had come to realize that the administration was merely serving as the messenger for the board of trustees’ decisions.

Mr. Galeski, who became involved in climate change activism after witnessing a drought in Cape Town, South Africa, during a study abroad program, believes that the university will divest completely from fossil fuels in time.

Ms. Burke told America that she began to focus more on climate concerns after taking a course on “climate change and divine providence” with Richard W. Miller, professor of systematic and philosophical theology. She called the announcement by Father Hendrickson to begin divestment efforts “a welcome surprise.”

While Mr. Galeski is similarly encouraged by recent steps taken by the university, he and other students have been frustrated by a lack of transparency on the issue. “I’ve always been a proponent of cooperation, but...other students [and I] have been increasingly frustrated when there just doesn’t seem to be that willingness to work with the students to really get to the bottom of this,” said Mr. Galeski.

Last November, 86 percent of voting students supported a nonbinding referendum that urged university trustees to sell off the university endowment that was invested in fossil fuel corporations by 2025.

Ms. Burke says that Creighton should implement a plan to fully divest by a specific date “whether that’s as we’ve outlined in our student referendum or otherwise.”

Last November, 85.8 percent of voting students—2,438 in total—supported a nonbinding referendum that urged university trustees to sell off the then-10.6 percent of the university endowment that was invested in fossil fuel corporations by 2025.

“The proposed action is that Creighton University immediately freeze any new investment in fossil fuel companies, divest from direct ownership and any commingled funds that include fossil fuel public equities and corporate bonds by 2025...and consistently analyze and evaluate returns with respect to the evolving market,” reads the text of the referendum.

In promoting the importance of fossil-fuel industry divestment, the student referendum specifically references Catholic social teaching and the 2015 encyclical “Laudato Si’,” in which Pope Francis promoted ecological justice and the care of creation.

“Creighton University should strive to act as a leader of the larger climate justice movement in accordance with its mission, its Catholic and Jesuit identity, and its fiduciary responsibility as a university,” the students wrote.

In promoting the importance of fossil-fuel industry divestment, the student referendum specifically references Catholic social teaching and the 2015 encyclical “Laudato Si’,” in which Pope Francis promoted ecological justice and the care of creation.

The Creighton Student Union, the university’s student government, was key in organizing the referendum. “A big thing that [C.S.U. was] able to help the movement do is get meetings with the president,” said Donna Shahbazi, former student body president, who said that Father Hendrickson met with students three or four times prior to the referendum vote and twice after the vote. “Our relationship with administration has been good for many years,” she said.

Father Hendrickson has rejected calls for immediate divestment, explaining in a statement on Nov. 13 that Creighton must adopt a “disciplined investment approach in its endowment, with a broad diversification strategy designed to achieve long-term returns.”

Divestment advocacy at Creighton kicked off in April 2018, when over 200 students rallied to urge action on climate change. In October 2019, a month ahead of the referendum vote, several students took part in a video to encourage divestment.

In the video, Michael Linngren, a member of the Creighton Student Union, made an economic argument: “Creighton should divest from fossil fuels because the investment in fossil fuels poses a constant risk to the school’s financial security, as over the long term, the value of our investments in these companies will decrease.”

Creighton is not alone in undertaking divestment efforts spurred by student involvement. Georgetown University President John J. DeGioia announced on Feb. 6 that Georgetown would stop directing endowment funds to investments in fossil fuel corporations. In September 2018, the board of trustees at Seattle University voted to completely divest its endowment from fossil fuel industries by 2023. Fossil Free, a climate justice movement that promotes divestment, currently lists 379 campaigns to divest from fossil fuels, including efforts at Fordham University, Claremont School of Theology and Loyola University New Orleans.