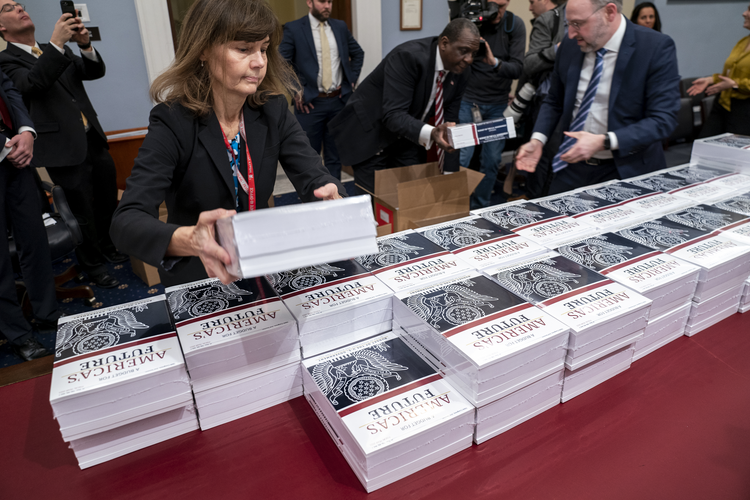 In response to the proposed $1 trillion in cuts to health care spending, the Catholic Health Association announced it was “deeply disappointed” in the budget. “CHA believes that our nation’s spending priorities should reflect our moral commitment to assisting the least among us,” said the group in a statement released on Feb. 10. “For millions of Americans, who rely on Medicaid and other health care programs, as well as housing and nutrition programs that promote healthier lives, cuts to these programs will have devastating consequences.

Catholic Health Association: “For millions of Americans...cuts to these programs will have devastating consequences."

“While we do commend the Administration’s proposal to expand the mental health services available under Medicaid, that effort would only be negated by the budget’s cuts and other harmful program requirements.”

In announcing the proposed budget at the White House, Mr. Trump denied slashing health care. “We’re not decreasing Medicaid but we’re doing a lot of things that are very good, including [addressing] waste and fraud,” he said.

On the education front, the proposed budget gives states greater discretion in their use of education funding while cutting funds and reducing staff at the federal Department of Education. The administration has further reiterated its goal to end the existing student loan forgiveness program and create a new program where 12.5 percent (instead of the current 10 percent) of borrowers’ income will pay for loan debts. The budget also plans to shutter the National Endowment for the Humanities, which was created in 1965.

The budget also plans to shutter the National Endowment for the Humanities, which was created in 1965.

“As NEH awaits Congressional action on the President’s proposed budget, the agency is continuing normal operations and will announce our latest round of FY 2020 awards this spring,” wrote endowment chairman Jon Parrish Peede in a statement.

Following a standoff between the White House and Congress over $5.7 billion in spending for a U.S.-Mexico border wall, which triggered a five-week partial government shutdown last year, the new budget asks Congress for $2 billion for construction of the wall. In December, Congress tentatively agreed to a federal spending plan that included $1.4 trillion for the wall.

The Washington Post reports that the budget plan would cut foreign aid by 22 percent, while humanitarian aid funding for disaster relief and refugees would fall from $9 billion to $6 billion in total.

“U.S. foreign assistance is a symbol of hope for millions,” responded Bill O’Keefe, executive vice president for mission, mobilization and advocacy at Catholic Relief Services. The international humanitarian organization criticized the proposed 2021 budget in a statement released Feb. 11. “When the U.S. administration proposes cutting aid by 22%, including deep cuts to poverty-reducing development and lifesaving humanitarian assistance, we snuff out that hope,” reads the statement.

Catholic Relief Services: “U.S. foreign assistance is a symbol of hope for millions.”

“The Catholic community in the United States, through their individual support for agencies like Catholic Relief Services, firmly believes in our collective ability to preserve and uphold the sacredness and dignity of all human life.”

Promoting an increase in defense spending, President Trump has proposed over $15 billion for 115 “advanced fighter aircraft,” among other military programs. The budget allocates $111 million for the newly formed Space Force, the first new branch of the military established since 1947.

The budget also calls for an 19 percent increase in funding for the National Nuclear Security Administration, in part to pay for the creation of a new nuclear warhead, the W93. Some $3.2 billion is slated for the development of hypersonic weapons. The New York Times stated that Mr. Trump’s focus on military spending makes his clear his “own belief that the United States should maintain the world’s most powerful nuclear force—and perhaps enlarge it.”

Eli S. McCarthy, a Georgetown professor and director of Justice and Peace for the Conference of Major Superiors of Men, denounced the president’s proposed $740.5 billion in Pentagon spending as “in stark contrast” to the teachings of Christ. “Jesus says blessed are the peacemakers, [to] love our enemies and [he] calls us to processes of reconciliation.” Advocating for a focus on “nonviolent peacebuilding,” Mr. McCarthy said that Mr. Trump’s proposal propagates “the illusory and deadly assumption that massive military spending and [the] projection of violent force ultimately deters others from being violent.”

Pope Francis called for the worldwide prohibition of nuclear arms in an address on Nov. 24, 2019, in Nagasaki, Japan. “A world of peace, free from nuclear weapons, is the aspiration of millions of men and women everywhere,” the pope said. “To make this ideal a reality calls for involvement on the part of all: individuals, religious communities and civil society, countries that possess nuclear weapons and those that do not, the military and private sectors, and international organizations.”

Show Comments ()
Join the conversation: Login or create an account
Before you can comment, you need to update your profile to include your first and last name, as required in our comments policy. Then reload this page and you'll be set up for commenting. Update your profile
Advertisement
More: Donald Trump / US Politics / Health Care