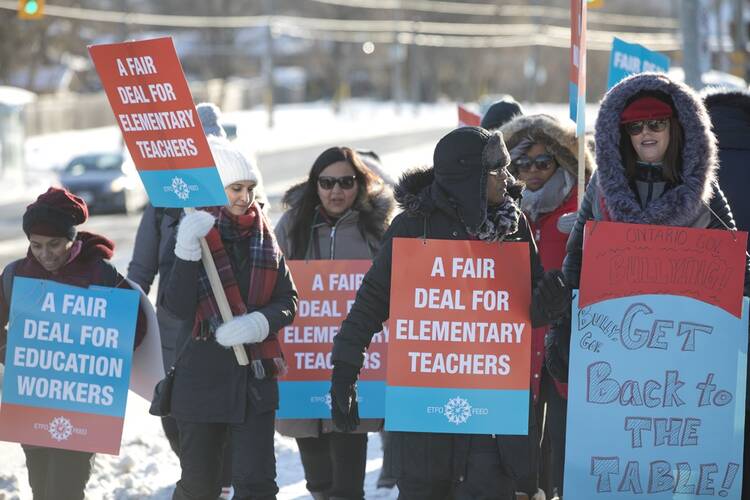 On Jan. 21, members of the Ontario English Catholic Teachers Association, which represents 45,000 teachers from kindergarten to 12th grade, held a one-day strike across the province. As negotiations with the provincial government continued to stall, the Catholic teachers’ union called another one-day strike on Feb. 3. The job actions, which come alongside strikes by other teachers’ unions across the province, reflect a new breaking point in relations between public educators and the Progressive Conservative government of Ontario, led by Premier Doug Ford.

“Typically when we go to the bargaining table to negotiate a contract, we sit opposite a party that has the same intention as us, to negotiate an agreement that supports our education system and the success of our students,” said Liz Stuart, the president of the Ontario English Catholic Teachers Association, in an email to America. “This time, we sit across from a government that we believe is looking to find savings and sees education as an expense, not an investment.”

Negotiations have been fraught in light of significant cuts proposed by the Progressive Conservative government, which ran a campaign in 2018 that was roundly criticized for refusing to detail where these cuts would be made. Mr. Ford had promised that no public sector jobs would be lost, but this has turned out to be false, not least in the education field. To take one example from the O.E.C.T.A. alone, 335 teachers hired to work with indigenous students and special needs students and others were cut as the government failed to renew its contract with public school teachers. Teachers have been working without contracts since last August.

The job actions reflect a new breaking point in relations between public educators and the Progressive Conservative government of Ontario, led by Premier Doug Ford.

That means the Ontario government is responsible for setting budgets in Catholic schools as well as determining curriculum requirements and maintaining contracts with teachers.

In addition to resisting the budget cuts, unions have also opposed government plans to change the education model in Ontario. Among the proposals are an increase in class sizes, meaning in some cases up to 40 students in a core subject class like math, and replacing some in-class education with mandatory internet learning. O.E.C.T.A. members voted 97.1 percent in favor of strike action in November.

“We cannot continue to come to a bargaining table, ready to engage in a negotiation, with a government that has no intention of negotiating, that simply wants us to capitulate to all their demands. What other choice do we have than to remove our labor?” Ms. Stuart asked.

The three other major unions representing public school teachers in Ontario have also committed to job actions. The Ontario Secondary School Teachers’ Federation and the Elementary Teachers’ Federation of Ontario have held one-day strikes similar to the O.E.C.T.A., and the Association des enseignantes et des enseignants franco-ontariens, which represents teachers in French-language schools, began a work-to-rule campaign, meaning union members will only do the minimum duties defined under their job descriptions. On Feb. 7 the association announced that it would begin holding province-wide walkouts once a week starting on Feb. 13 after contract talks with the government stalled.

“We cannot allow this government to wear us all down and force us to accept their devastating cuts. The long-term consequences for our schools and our students are simply unacceptable.”

Teachers are automatically members of a union in Ontario when they are hired by a school board, Ms. Stuart explained. Each major union bargains separately, with different concerns and strategies based on their membership. “Messaging to the public and individual union history also make for some differences among the unions, especially for us as Catholic teachers, since we also draw from Catholic social teaching,” said Ms. Stuart. “Since the cuts are province-wide, however, all four major unions have to negotiate around some common issues.”

In the midst of a disruptive start to the new year, the provincial government has been working to get the public on its side. As schools are closed, the government pledged to offer child care compensation for parents, a move Sam Hammond, the president of the E.T.F.O., called an attempt to “bribe the public to support the government.” The funds for compensation come out of the unpaid salaries for teachers on strike.

Parents can receive $25 to $60 per child per day, although this offering is not enough to cover a day of child care in a city like Toronto, where parents pay the most for child care in Canada. Some parents, frustrated by the government’s response, have volunteered to apply for and then donate their compensation back to the schools. Only about a quarter of eligible parents have applied for the compensation, however; among them, some parents have been mistakenly overpaid by the government already.

Are there opportunities for more dialogue after Canada’s divisive election?
Dean Dettloff

“We know Ontarians are growing impatient with these negotiations. Frankly, we share their frustration,” said Ms. Stuart. “But we cannot allow this government to wear us all down and force us to accept their devastating cuts. The long-term consequences for our schools and our students are simply unacceptable.”

For its part, the Catholic teachers’ union announced on Feb. 5 “that members will be enhancing their administrative job action” beginning Feb. 11. That means that “during the regular school day, O.E.C.T.A. members will only undertake their scheduled teaching and supervision duties. They will not accept additional tasks or assignments. Parent-teacher interviews will go ahead if they have been scheduled. Teachers will continue to participate in extra-curricular activities.”

The strikes and other work actions have raised awareness about the impact the provincial government’s fiscal decisions may have on the future of education in Ontario, but there were no clear signs that progress was being made in any of the union negotiations.

@deandettloff
Show Comments ()
Join the conversation: Login or create an account
Before you can comment, you need to update your profile to include your first and last name, as required in our comments policy. Then reload this page and you'll be set up for commenting. Update your profile
Show Comments ()
Comments are automatically closed two weeks after an article's initial publication. See our comments policy for more.