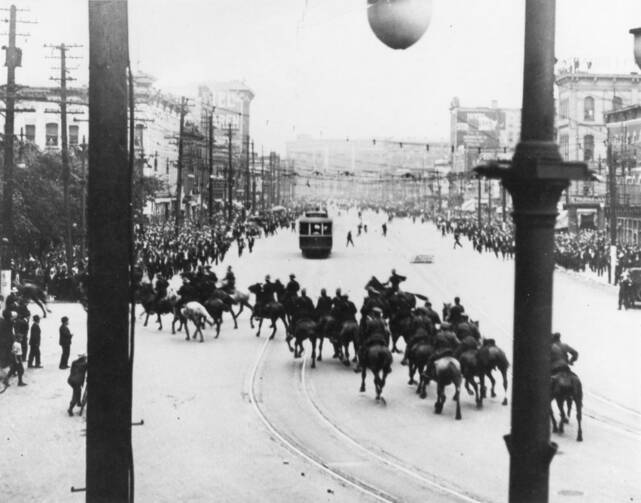 A century ago, workers in Winnipeg, Manitoba, took to the streets in the largest general strike in Canadian history. It lasted six weeks over May and June 1919 and ended with violence, mass arrests and an iconic image of a derailed streetcar, overturned by the strikers.

It was a moment of peak labor militancy in Canada, but the strike was also heavily inflected by the Social Gospel movement. Rev. William Ivens served on the strike committee and went to jail. Fellow pastor Rev. J. S. Woodsworth would soon go to jail, too, for his participation in the strike. Meanwhile pastors in nearby towns, like Rev. A. E. Smith in Brandon, Manitoba, organized solidarity strikes.

For the centenary of the strike, unions and social justice groups have been celebrating this historic event, including Unifaith, a union for faith workers in the United Church of Canada, the largest Protestant denomination in the country, which put together a resource for worship communities to connect with the strike in contemporary times.

While this year marks an opportunity for Canadian Protestants to remember a time when they were deeply embedded in the labor movement, it also marks a labor anniversary important for Catholics in Canada. In 1949, miners calling for a wage increase and safety reforms walked off the job in dangerous asbestos mines near the town of Asbestos, Quebec. Yes, the community was named after the mining industry that sustained its residents.

Five thousand miners participated in the strike, which lasted from February to June. Conflict escalated quickly, with strikers and police trading beatings.

This year marks an opportunity for Canadian Protestants to remember a time when they were deeply embedded in the labor movement. It also marks a labor anniversary important for Catholics in Canada. In 1949, miners walked off the job in dangerous asbestos mines in Quebec.

“In batches of 50 or 25 arrested strikers were packed into a police bus and taken to jail in Sherbrooke. Some were badly battered and bleeding,” reported the Montreal Gazette on May 7, 1949. And there in the middle of it all was the Catholic Church, an institution tied to the conservative government of Maurice Duplessis in Quebec but home to loyalist and dissident voices alike.

Future Prime Minister Pierre Trudeau, who had been a lawyer at the time of the strike, called the event “a violent announcement that a new era had begun.”

“In the background of the strike is a strong rise of labor activism and labor unions in postwar Quebec, particularly in the sector of Catholic unions themselves,” said Michael Gauvreau, a history professor at McMaster University and author of the book Catholic Origins of Quebec’s Quiet Revolution, 1931-1970.

Across Canada, the labor movement grew in the early 20th century, with unions organizing workers around class differences. “The Catholic labor movement had a whole parallel structure of separate, confessionally based unions,” said Mr. Gauvreau. “These unions had been quite conservative in their orientation during the 1930s. Many, in their charters, had a no-strike pledge, and they promoted harmony with the church’s teachings. But during the Second World War, there had been a radicalization of these unions, as well as a radicalization of their understanding of the church’s teachings on labor.”

In 1939, the Quebec Liberal Party replaced Union Nationale, a far-right party, as the ruling party in the province. That government lasted until 1944, when Union Nationale, led by Duplessis, regained power with a majority government. Under the Liberal government, labor was able to find its voice, but Duplessis returned to power with a vengeance, adopting anti-labor policies and approaches in the interest of courting investment, often from businesses located outside Quebec.

Despite that reaction, according to Mr. Gauvreau, some of the demands made by Catholic unions continued to be even more radical than among unions elsewhere in Canada. They advocated not only better pay but profit sharing and co-management of businesses by workers.

Some of the demands made by Catholic unions continued to be even more radical than among unions elsewhere in Canada.

“Labor’s trump card was papal and Catholic social teaching, since Quebec was a Catholic environment, and there was considerable support for labor’s cause among some segments of the clergy, although by no means all,” said Mr. Gauvreau.

The Catholic Church in Quebec at this time worked hand in glove with the government to provide essential social services. The church’s symbiotic relationship with the Quebec government, Mr. Gauvreau said, mean that bishops were concerned about losing the financial support of the province, which they needed to operate schools, hospitals and other institutions. “[The church] directed, ran, managed and was responsible for all the social welfare and education in Quebec. It was an enormous enterprise, made even more worrisome and complex by postwar conditions of population boom, more people seeking education—a lot of these social services were in high demand. Money is a huge motivator.”

As the labor movement began to stir in the province, Mr. Gauvreau said, the bishops had to “walk a very narrow path. They [were] aware of divisions within their own ranks. Some bishops were much more socially radical than others, who wanted the old conservative alliance with government and business.”

Financially, he added, the bishops could not afford to anger Mr. Duplessis in particular. The bishops’ close relationship to the premier was significant at the outset of the Asbestos Strike after Mr. Duplessis quickly declared it illegal.

Not every bishop felt so tied to provincial power, however. Among those supportive of the strike was Archbishop Joseph Charbonneau of Montreal. In a sermon in May 1949, he declared, “The working class is the victim of a conspiracy that aims to crush it, and…it is the duty of the church to intervene.” Archbishop Charbonneau, along with Archbishop Maurice Roy in Quebec City, directed priests in their dioceses to take up collections in support of the strikers, who were struggling along with their families without a steady income.

As one journalist from the time put it, “From May 1 on these contributions provided strikers with most of their funds. The effect on morale was electric—the strike became a crusade.”

By July 1, however, the strike was over, mediated by Archbishop Roy. Battered and demoralized, the strikers received a modest raise of five cents more an hour, a third of the 15-cent hike they asked for. Demands for mitigation of the dangers of working around asbestos dust, incompletely understood then, went unaddressed.

The failure of the Asbestos strikers to achieve their goals is remembered as a turning point in Quebec society, which beginning in 1960 would rapidly secularize during a period commonly called the Quiet Revolution.

Adding insult to injury, Archbishop Charbonneau resigned in January 1950. The Vatican cited health reasons, but labor activists in Quebec were convinced it was the archbishop’s willingness to side with the workers that led to his departure. Archbishop Charbonneau spent the rest of his days in Victoria, British Columbia, until he died in 1959, just months after Mr. Duplessis himself passed that year. His body was returned to Montreal, where he was buried at Mary Queen of the World Cathedral.

Whatever the real reason for his resignation, Archbishop Charbonneau left a clear impression on Quebec. He was praised in newspapers and remembered for his support, and he was even commemorated in a play titled “Charbonneau et Le Chef,” the latter a nickname for Mr. Duplessis, dramatizing the struggle between the ecclesial and political leaders. A small park in Montreal was named after Archbishop Charbonneau in 2004.

The failure of the Asbestos strikers to achieve their goals is remembered as a turning point in Quebec society, which beginning in 1960 would rapidly secularize during a period commonly called the Quiet Revolution. Mr. Gauvreau argues that the Asbestos strike has “been viewed as the beginning of the end of the social influence of the church over broader Quebec society.” Although he noted that many of those in and supporting the strike did so because of their understanding of Catholic social teaching, including lay workers and union chaplains, the hierarchy backed away from this opening to a more labor-friendly church.

According to Mr. Gauvreau, it would be putting it too strongly to say the Asbestos Strike was the opening salvo of the Quiet Revolution, which would not begin for another decade, but the experience did politicize many intellectuals who would become major players throughout the 1960s, and it created a narrative about the church as a force holding back the possibility of a more just society in Quebec.

Are there opportunities for more dialogue after Canada’s divisive election?
Dean Dettloff

In the 21st century, it is hard to imagine Canadian workers bringing a city like Winnipeg to a standstill or labor disputes turning out as bloody as in Asbestos. But the labor movement in contemporary Canada is anything but placid. Postal workers had to be legislated back to work in November 2018; railroad workers recently ended a long strike over working conditions; and workers in the “gig economy,” like Uber drivers and Foodora couriers, are trying to unionize for the first time.

Canadian workers seem on the move again. Are pastors and bishops ready this time to join them?

Though things have changed, the Catholic Church in Quebec is still engaged in the labor movement, said Louise Royer, director of social ministry in the Diocese of Montreal. “The labor movement is well organized now and can bring support when there is a strike,” she said. “The church comes in second and usually as persons or grassroots organizations, not as an institution.”

Yet the institutional church is still interested in the labor movement, and Ms. Royer noted that for decades bishops in Quebec have customarily circulated a message on May 1, an important day for the labor movement. This year, Quebec bishops called for a minimum wage of at least $15 an hour in solidarity with a campaign initiated by labor unions.

“Bishops are listening to the workers’ world,” said Ms. Royer. “We care for their well-being, and not only at work. They are the people to whom God sends us, and he entrusts [them] to our pastoral care.”

@deandettloff
Provide feedback on this article
Join the conversation: Login or create an account
Before you can comment, you need to update your profile to include your first and last name, as required in our comments policy. Then reload this page and you'll be set up for commenting. Update your profile
Show Comments ()
Comments are automatically closed two weeks after an article's initial publication. See our comments policy for more.