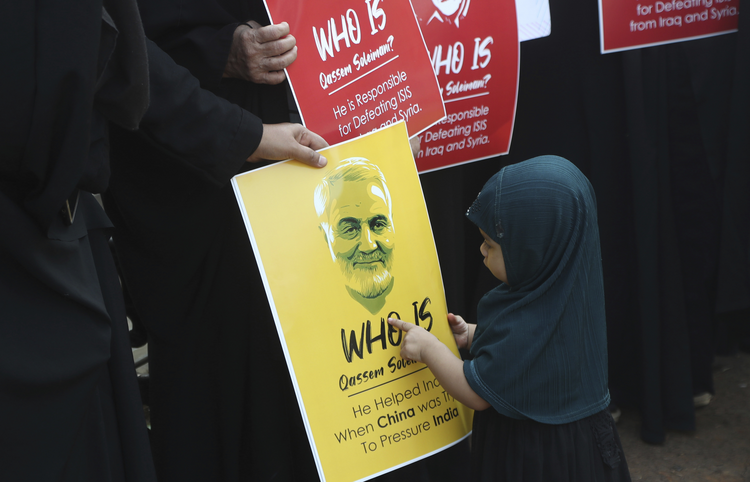 A Shiite Muslim girl points at a portrait of Iranian Gen. Qassem Soleimani, who was killed in a U.S. attack, during a protest against the United States in Mumbai, India, on Jan. 9. (AP Photo/Rafiq Maqbool)

The Trump administration’s “maximum pressure” campaign against the Islamic Republic of Iran took a lethal turn with the U.S. killing of Iranian Gen. Qassim Suleimani and several others on Jan. 3 in Baghdad. The targeted killing increases the prospect of war between Iran and the United States and was itself an act of war. Not inaccurately, Iran called it an act of “international terrorism.”

The administration argued that the killing of Soleimani was taken to prevent “imminent attacks,” but that justification soon fell apart, with President Trump eventually tweeting that whether attacks were imminent “doesn’t really matter.” It does matter in international law, and by violating both international and U.S. law, the assassination sets a dangerous precedent for other nations to follow. It is another marker of the decline in decency and respect for law since the war on terror began almost 20 years ago, a war that has led to signal failures in Iraq and Afghanistan yet shows no sign of ending, propelled by both imperialism and intellectual inertia that few in either party challenge.

The killing of Soleimani is another marker of the decline in decency and respect for law since the war on terror began almost 20 years ago.

Since withdrawing the United States from the Joint Comprehensive Plan of Action, adopted under the Obama administration and commonly known as the Iran nuclear deal, the Trump administration has imposed crushing sanctions on Iran aimed at reducing its oil exports to zero (by threatening secondary sanctions against any other country doing business with Iran). The new sanctions are unprecedented in their scope and severity and have hit hard. Oil exports have plummeted and the country is in a deep recession. The International Monetary Fund reports that Iran’s gross domestic product already fell an estimated 4.8 percent in 2018 and shrank by almost 10 percent in 2019. The sanctions pose an existential threat to Iran, now accused of attacking the oil assets of other countries with drones in hopes those countries will put pressure on the Trump administration to ease up on its maximum pressure campaign.

The long-term objective of the campaign is unclear. Many argue that there isn’t one, that Mr. Trump has simply subcontracted U.S. foreign policy to key donors and favored foreign allies like Israel, Saudi Arabia and the United Arab Emirates, all of which are happy to see Iran perpetually isolated, sanctioned and punished. While the president has airily spoken of reopening negotiations with Iran, experts are skeptical that the administration has given any serious thought to how it would negotiate a more comprehensive accord.

The new U.S. sanctions are unprecedented in their scope and severity, and they pose an existential threat to Iran.

Both Secretary of State Mike Pompeo and former National Security Advisor John Bolton have been outspoken proponents of regime change in Tehran. Inasmuch as there is a strategy behind the pressure campaign, it appears to be forcing regime change in Iran by making life so untenable for ordinary Iranians they revolt against their government. This is unlikely, but if it does occur, what happens then? Few knowledgeable observers see much planning by the administration for what comes after. Should the regime fall, the most probable scenario is instability, violence, chaos and thousands (perhaps millions) of Iranians fleeing to other countries already overburdened by refugees.

Another failed state in the Middle East hardly seems desirable, yet voices inside and outside of Congress have been agitating for war with Iran for the last decade or more. Though Mr. Trump came to office proclaiming no more “stupid” wars in the Middle East, that goal is not universally shared by his administration. Mr. Bolton is out, but Mr. Pompeo is a militarist and reportedly one of the strongest advocates for the killing of General Soleimani. While the immediate response from Iran to that U.S. attack was measured and proportionate—two missile attacks on U.S. bases in Iraq, which received warning ahead of time so the no lives were lost—the response is unlikely to end there. With the United States bludgeoning its economy and killing its leaders, the Islamic Republic is going to have to take countermeasures. The two countries are in an escalatory cycle with no off-ramp in sight. Leaders of both countries say they do not want war, but the logic of their actions is taking them farther down the path to it.

“Reckless” and “feckless” are two of the kinder words to describe the Trump administration’s actions toward Iran. Mr. Trump’s threat on Jan. 4 to bomb 52 targets—including cultural sites—in Iran, one for each U.S. hostage taken hostage at the American embassy in Tehran in 1979, is breathtaking in its savagery, its lack of conscience, its pettiness. To hear that is to think that the barbarians are not outside the gates; they are sitting in the Oval Office.

Provocative as it is, the Trump administration’s behavior toward Iran represents more of a continuance of longstanding U.S. policy than a break from it. Efforts to undermine, subvert or overthrow the regime have gone on for years, and the demonization of Iran here at home is rarely challenged. No one ever got elected to office in this country saying let’s be nice to Iran. But shouldn’t we? At the crux of our conflict with Iran is its resistance to U.S. hegemony in the Middle East and its pursuit of an independent foreign policy. For that crime we should destroy it? How much of a price does the world have to pay for the delusions of empire and the quest for absolute power?