U.S. belligerence toward Iran is a failure of moral leadership 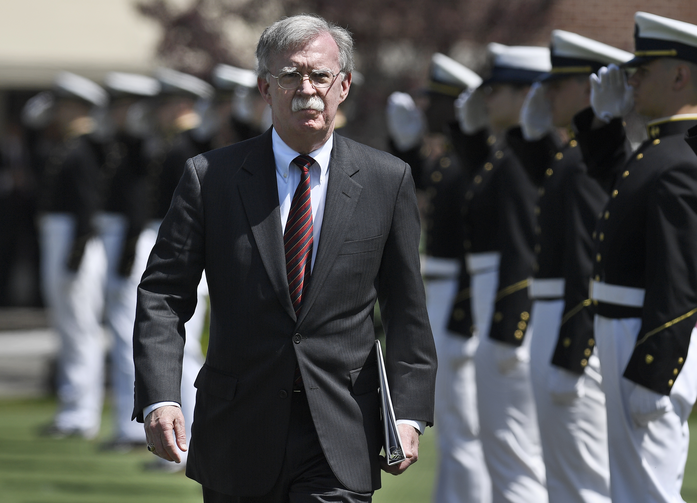 National Security Adviser John Bolton, seen here at the commencement for the United States Coast Guard Academy in New London, Conn., on May 22, has been a proponent of putting “maximum pressure” on Iran. (AP Photo/Jessica Hill)

Iran is the country Americans love to hate, but do we want to go to war with it? War is what the Trump administration is flirting with, and though President Trump himself sends ambiguous signals—“Call me,” he said airily to Iranian leaders after National Security Adviser John Bolton and Secretary of State Mike Pompeo threatened military action against the country—the danger is that, even inadvertently, we might end up there.

When it comes to Iran, belligerence is the only mode the Trump administration seems to know. After pulling out of the nuclear nonproliferation deal with the Islamic nation and imposing draconian economic sanctions designed to bring the country to its knees, the administration has turned to military measures, sending an aircraft carrier, bombers and missile defense systems to the Persian Gulf. In early May, it announced additional measures that include sending 1,500 more troops and a fighter aircraft squadron to the Middle East.

War is what the Trump administration is flirting with, and the danger is that, even inadvertently, we might end up there.

The United States is claiming these moves are “defensive”—a response to recent attacks on Saudi oil tankers and pumping stations in the Persian Gulf and a May 19 rocket attack on the Green Zone in Baghdad. It is not impossible that Iran is behind the attacks, but the administration is refusing to provide information about the intelligence that it says proves Iranian involvement.

It is pretty clear who is provoking whom. Iran has been abiding by the terms of the nuclear deal despite the United States reneging on it last year. But with its economy collapsing under the weight of sanctions that the United States is able to strong-arm other countries into observing, the Iranian government announced in May that it would resume the production of nuclear centrifuges unless it was provided some financial relief.

Even before the Trump administration declared economic war on Iran, the promised benefits to that country from the nuclear agreement had not materialized. Since leaving the agreement, the Trump administration has been turning the screws tighter at every turn. In April, the United States designated Iran’s Islamic Revolutionary Guard Corps a foreign terrorist organization, the first time the U.S. government has ever so identified an organization of a foreign government and a designation that comes with a host of penalties. The move took place over opposition by the U.S. military, including the head of the Joint Chiefs of Staff, who argued it could place U.S. troops in danger and enable Iran to justify operations against U.S. Special Forces overseas or units working for the C.I.A. That announcement came a day before elections in Israel. According to The Times of Israel, Prime Minister Benjamin Netanyahu, in a tweet in Hebrew, thanked Mr. Trump for “acceding to another one of my important requests.”

It is unclear whether the U.S. military moves are intended just to intimidate Iran or to goad it into making a move that could become a casus belli. But with the sanctions drastically reducing its oil revenues and fueling runaway inflation, Iran has little choice but to use whatever leverage it can muster to show that it will not acquiesce to its own destruction. Meanwhile, few U.S. politicians have spoken out against the reimposition of sanctions, morally indefensible though they are.

Iran has little choice but to use whatever leverage it can muster to show that it will not acquiesce to its own destruction.

For years, Iran has been demonized by both major political parties in the United States. By adopting a policy of “maximum pressure” on Iran, Mr. Bolton and Mr. Pompeo are seeking to inflict such massive damage to its economy that regime change will follow.

This is an iffy proposition. It did not work in Iraq after the first Gulf War; it has not so far worked in Venezuela, where sanctions are further devastating an economy in free fall. Even if sanctions were to have the effect that the administration wants, what then? Would we see a peaceful transfer of power in Tehran? Unlikely. Count on violence, turbulence, civil war and more refugees fleeing to other countries, spreading political instability with them.

A U.S.-Iran war could be even more damaging. For years, officials have made it clear that a U.S. war with Iran would be far costlier than our disastrous invasion of Iraq. On May 16, The New York Times published an extraordinary column by Wendy Sherman, the State Department’s lead negotiator in the Iran nuclear deal, calling on Congress to immediately hold hearings on leaked plans to send 120,000 U.S. troops to the Middle East in the event of war. This is a sign of how seriously some experts view the administration’s escalating rhetoric. Now the director of the Center for Public Leadership at Harvard’s Kennedy School, Ms. Sherman calls for Congress, business leaders in this country and Europe, and other leaders to defy the Trump administration and make Instex, a financial mechanism set up by Europe to provide investment and humanitarian assistance to Iran, operational and effective.

The United States’ moral claim to global leadership has been dubious for decades. Under the Trump administration, the delegitimization of U.S. power is accelerating. Iran is not and never has been a threat to the United States. For us to go to war with it to parade our strength or please our allies in the Middle East is reckless, arrogant and foolish. Ms. Sherman uses the word “catastrophic” to describe the effect a U.S.-Iran war could have on the world. Americans need to tell their leaders that they will not support another senseless war in the Middle East, nor should Congress.

Iran sets atop one of the largest natural gas reserves in the world. The US as amped-up its gas production, and through the last decade expanded its capacity to process gas for export. China and Asia are importers of LNG, and ar depended on it for the foreseeable future. Iran is also an exporter of oil to European markets, the Saudis are in the oil business. There is a move toward other means of energy, and I'm not referring to coal, though Ukraine, through OPIC development programs is expanding its reliance on coal, which the US can and does export. Let's not forget that most coal powered plants in the US are headed the way of the dinosaur. This is all energy, bottom line, top line, import export . With the Iraq's evolution as an Iranian ally, and lets not forget their oil reserves, plus Libya's the regional economic power in the ME could rapidly swing away from the US, and let's not forget the Chinese one-belt(?) initiative, which runs right through the Iranian's backyard allowing China and perhaps Europe as well to benefit from Iranian natural gas and oil. All of this hurts the profit of the US, Saudis and UAE. So in summary, I would argue that Iran is an economic threat to the powers that be. The US' foreign policy is totally predicated on maintaining the economic status quo. We are all foolish, given the US' rising capacity as a LNG and oil exporter, if we believe that Iran is viewed as a military threat. Please remember that Venezuela, which is also an oil exported, like Iran is suffering from prolonged US and global trade sanctions. It's all oil ad gas and fossil fuels and the balance of the the balance sheet.
As a postscript, let's not forget North Korea , currently they import oil from Iran. There is a reason Trump is so complimentary of Rocket man, he's engaged in client development.

While no one wants a war with Iran, the treaty that allows them to acquire nuclear weapons in the coming years reeks with appeasement.( Munich 1938 ?).
Your talking about a country’ s leadership that pledges death to the State of Israel and the US.
While war is seldom the answer,neither is surrender.

While no one wants a war with Iran, the treaty that allows them to acquire nuclear weapons in the coming years reeks with appeasement.( Munich 1938 ?).
Your talking about a country’ s leadership that pledges death to the State of Israel and the US.
While war is seldom the answer,neither is surrender.

With this lineup of chickenhawks, it's amazing we haven't had war already. But they've been slowly working on it. Remarkable restraint given a president with low impulse control.

we have already had a war with Iran...... and we LOST. washington has never quite gotten over that-no matter which party is on the 'throne.' get over it guys........... we lost! get over it and move on.

Good, common sense article Ms. Patterson and thanks for it. Maybe it’ll provoke some introspection into a few of the rank and file members of the National League of Sycophants for Israel.