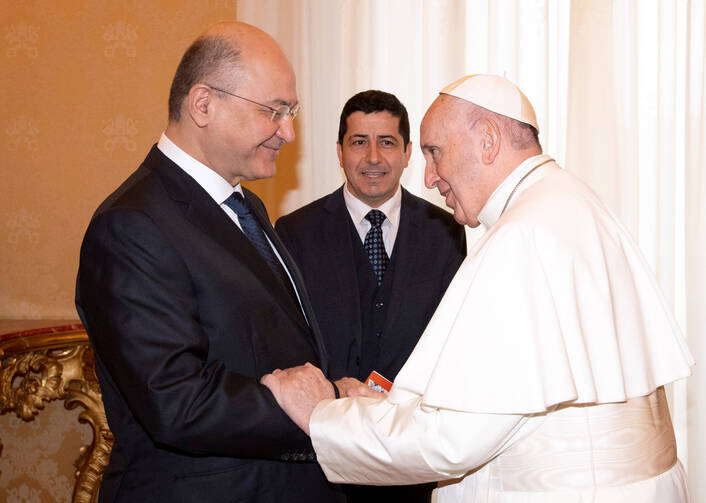 Pope Francis and Iraqi President Barham Salih discussed the importance of promoting stability and reconstruction in Iraq, which has been torn by conflict since 2003, as well as achieving this through dialogue and solutions that respect its sovereignty. They also discussed how to guarantee its Christians “security” and a place in its future.

The two leaders last sat together in the pope’s private library on Nov. 24, 2018, but this time they met amid grave new challenges following the U.S.’s recent assassination of Iran’s Qassim Soleimani in Baghdad, which has created grave tensions that have led to parliament asking for the removal of the American troops posted there.

Throughout his pontificate, Francis has shown a great interest in Iraq and its people that have suffered so much since the U.S.-led invasion in 2003. He is deeply concerned about the plight of its Christians, so many of whom have suffered greatly or fled since that war, and the subsequent persecution by ISIS and other groups.

Francis greeted the president on his arrival on the morning of Jan. 25, and then led him into his private library. There, seated across the table where he speaks with heads of states and other distinguished visitors, the two men spoke together assisted by the pope’s secretary, Msgr. Yoannis Lahzi Gaid, who is a Coptic Catholic priest and served as interpreter.

Pope Francis plans to visit Iraq this year, but Vatican sources told America the recent assassination of General Soleimani and subsequent tensions have cast doubts on that possibility, even though the pope seems determined to go. Today’s statement issued by the Iraqi presidency after the visit revealed that the “arrangement for the Papal visit to Iraq which is scheduled to be paid at a later date by His Holiness was discussed during the meeting.”

After their private conversation, the Iraqi President presented his delegation to the pope, and then the two leaders exchanged gifts. President Salih gave the pope a replica of the famous Code of Hammurabi, the ancient text of Babylonian laws, calling it “a symbol of peace.” Francis presented the Iraqi leader with a medallion depicting “the angel of peace” and a set of his main writings as pope, including a copy of the document on Human Fraternity that he had signed with Sheikh Ahmad al-Tayeb of Al Azar in Abu Dhabi. Moreover, he told the President that he wished to have an Iraqi identity card identifying him as a descendant of Abraham, the man of faith revered by Jews, Christians and Muslims.

After bidding farewell to the pope, the Iraqi President held talks with the Secretary of State, Cardinal Pietro Parolin, and the Secretary for Relations with States, Archbishop Paul Gallagher.

The Vatican, in a statement issued afterwards, said Pope Francis and President Salih, acknowledged “the good bilateral relations” between the two sides and “focused on the challenges the country currently faces, and on the importance of promoting stability and the reconstruction process, encouraging the path of dialogue and the search for suitable solutions in favour of citizens and with respect for national sovereignty.”

The Vatican statement said they also spoke about “the importance of preserving the historical presence of Christians in the country, of which they are an integral part, and the significant contribution they bring to the reconstruction of the social fabric, highlighting the need to guarantee their security and a place in the future of Iraq.”

The statement from the Iraqi side said, “the President asserted that the fraternity and peaceful coexistence among Muslims, Christians and other spectrums of the society is the only way to eradicate extremism in all its forms and types, indicating that the terrorist crimes committed against all Iraqi components are contrary to the religious tradition of Islam.”

The Vatican statement concluded by saying, they also discussed “the various conflicts and grave humanitarian crises that afflict the Middle East region, underlining the importance of the efforts made with the support of the international community to re-establish trust and peaceful co-existence.”