Will pro-life Democratic voters be courted in the 2020 primary? So far, it’s not likely. 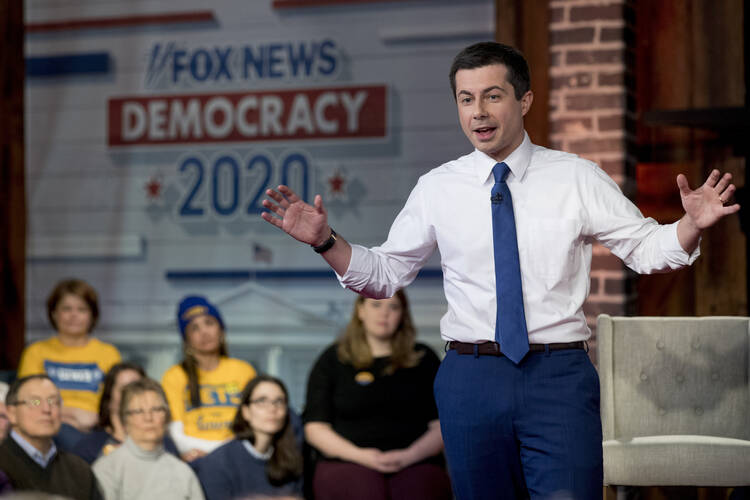 The political action committee Democrats for Life of America does not often capture national attention, but over the weekend the group’s president, Kristen Day, had a memorable encounter with Democratic presidential candidate Peter Buttigieg during a televised town hall on Fox News. On Jan. 26, Ms. Day bluntly asked the candidate if he were willing to accept the support of “people like me” in the upcoming campaign, reviving the party’s big tent approach on the divisive issue.

“I’m not going to try to earn your vote by tricking you,” the former mayor of South Bend, Ind., told her. “I am pro-choice, and I believe that a woman ought to be able to make that decision.

“The best I can offer is that if we can’t agree on where to draw the line, the next best thing we can do is agree on who should draw the line. And in my view, it’s the woman who’s faced with that decision in her own life.” His response was quickly memed and circulated by his campaign on social media, where some described Ms. Day’s engagement with the candidate as an ambush of Mr. Buttigieg, a characterization she disputed.

“No, it absolutely was not an ambush,” Ms. Day said. “His campaign had plenty of time to talk to me in advance about these issues. We’ve been reaching out…since mid-December and trying to set up meetings to talk about it because there are a lot of pro-life Democrats who thought that he would be a good candidate to support.” That meeting never occurred, she said.

“I didn’t ask about his position on abortion. I asked him: ‘Do you want the pro-life-Democrat vote? And I guess the answer was ‘no.’”

“It shouldn’t have been a shock to his people. What was shocking was his answer, or his non-answer. To me I think he just really missed an opportunity.

“I didn’t ask about his position on abortion,” she said. “I knew what his position is. What I asked him was: ‘Do you want the pro-life-Democrat vote and would you be willing to discuss platform language that says that pro-life Democrats are included? And I guess the answer was ‘no.’”

But that is no worse an answer than what she has already heard—or more pointedly—not heard from any of the other candidates who similarly, she said, have not responded to the issue of party inclusivity raised by Democrats for Life.

“So we’re going to continue to push on this…. There's 21 million people out there. Who is going to be the first candidate that says, ‘I want the pro-life-Democrat vote?’” Ms. Day explained she extrapolates that figure from existing polling on sentiment among Democrats and independents regarding abortion. According to the latest polling from Gallup, 45 percent of the nation’s Democrats and 56 percent of its independents support legal abortion “only under certain circumstances.”

Ms. Day predicts that if the party continues to antagonize that moderate middle, which seeks restrictions on abortion not envisioned by the party’s current platform, President Trump will be re-elected. Pro-life Democrats will either stay home in 2020, she said, or even “pull the lever for Trump because he has done a lot for some pro-life policies that people appreciate.” Under the Trump administration, she said, Planned Parenthood lost $60 million in federal funding, “and that money is going toward pro-life pregnancy centers.” Mr. Trump has also supported paid family leave, conscience protections for medical personnel who do not want to perform abortions and other initiatives supported by Democrats for Life.

She would be happy to discuss her concerns with party leadership, but during her last meeting with Tom Perez, Democratic National Committee chair, in 2017, he “made it pretty clear where he stood on us,” she said, “that pro-life Democrats are welcome in the party as long as they don’t vote that way and they just keep their mouths shut.”

Pro-life Democrats “probably” support “90 percent of the policies that our party stands for, but we can’t continue to support a party that gets more and more extreme on abortion and ignores human rights in the womb.”

America reached out to the Buttigieg campaign and the Democratic National Committee for comment on this issue. This report will be updated if their responses are received.

According to Ms. Day, pro-life Democrats “probably” support “90 percent of the policies that our party stands for, but we can’t continue to support a party that gets more and more extreme on abortion and ignores human rights in the womb or says that I have to support that if a child is unwanted, we should kill it, that we only provide protection for wanted children or we only provide health care for wanted children.

“If we don’t take a stand now, there will be no pro-life people left in the party at all,” she said. “This time around, we want to be more vocal and show that our vote can’t be taken for granted anymore,” she said. “We are not going to go pull the lever for Democrats because they ask us to. There has to be some room for the pro-life voters in the party.”

She complained that current and former staff from Planned Parenthood and other pro-choice organizations have taken leadership roles within the D.N.C. and are “calling the shots there.”

“So they’re giving this one-sided information,” she said. “They’re not painting a full picture of what the Democratic Party believes. They’re representing this minority position of people who want abortion up to nine months with taxpayer funding, which is very small part of the Democratic voter [base].”

Is there a future for pro-life Democrats?
Ryan Di Corpo

“Right now the platform language allows people to impose a litmus test against pro-life elected officials and candidates,” she said.

The Democratic Association of Attorneys General will no longer support pro-life candidates, and Act Blue, the main fundraising organization for Democratic candidates, “will not allow our P.A.C. to have anything on the site because they said they don’t want pro-life people to raise money for pro-life candidates,” Ms. Day said. Even just a few years ago, she remembers, such clear intra-party hostility to pro-life supporters was not as evident.

“When President Obama was running, he did some outreach to the pro-life Democrats and the religious groups, and he did work with us,” Ms. Day said. “Sometimes he was with us, sometimes he was against us, but at least there was the ability to have a conversation about the platform and what would be in it. And with President Obama, we did add more support for pregnant women [to the platform].”

But in 2016, she recalls, even that tenuous relationship began to break down. According to Ms. Day, the Hillary Clinton campaign hired a faith outreach director just a few months before the election “and made no attempt to reach out to pro-life Democrats.”

“So they didn’t vote for her,” she said. “There were a lot of Democrats who stayed home.” She hoped at the time that was a mistake the party might have learned something from. Now, four years later, Ms. Day appears tired of offering unappreciated strategic counsel.

“In 2024 we are going to have a pro-life Democrat run for president,” Ms. Day said. “It starts now…. I’ve been traveling around, going to all the Democratic debates, and we’re there with our ‘Pro-life for the whole life’ banner and we’re educating people on their own candidates. They don’t realize where their candidates stand on abortion.”

She described the feedback from Democrats she has met in the field as “very encouraging; we’re just building this stronger base.”