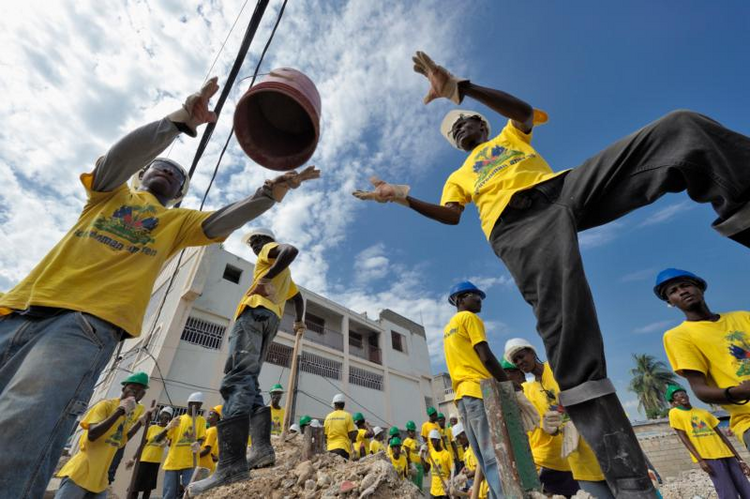 (CNS) -- The response to the massive earthquake that hit Haiti 10 years ago was well-intentioned but did not bring about structural change that could have helped lift the country's overwhelming poverty, said sisters reflecting on the earthquake's legacy.

Catholic sisters with longtime ministries in Haiti agreed the outpouring of humanitarian assistance was remarkable but also called into question Haiti's long relationship with humanitarian groups. Many Haitians said much of the aid was not effective and did not reach them.

"The earthquake was a disaster of staggering proportions, but so was the disaster that followed: promises of aid that morphed instead into relief money going to consultants and foreign companies instead of Haitian workers," said Sister Marilyn Lacey, executive director of the humanitarian agency Mercy Beyond Borders and a member of the Religious Sisters of Mercy. She was one of five sisters asked by Global Sisters Report to reflect on and assess the earthquake and its legacy.

"The Red Cross promising thousands of new houses and delivering only a few dozen. A U.N. contingent that not only brought cholera into Haiti, but also the sad reality of hundreds of children fathered by U.N. troops who then abandoned them," Sister Lacey told Global Sisters Report.

The response reinforced troubling dynamics in the Caribbean nation of 11 million people, where concerns over corruption and poor governance have become increasingly public. Haitians have taken to the streets of cities and the countryside in protests against the government of President Jovenel Moise.

Populations that have been exploited by colonial or autocratic governments "live with decades of simmering anger that can explode into violence without much provocation, said Sister Lacey. "It's the 'last straw' phenomenon, and we've seen it in Haiti these past two years."

She said she believes the response to the earthquake was well-intentioned and good in many ways.

"It saved lives. It restored some infrastructure. It brought hope to a dazed people," she said. But "it did not bring systemic change or transparency in government or widespread employment opportunities or much economic lift."

"The 2010 earthquake added to the hopelessness that mires Haiti," said Sister Judy Dohner, an American Sister of the Humility of Mary who experienced the earthquake and its aftermath. "The Haitian people became disillusioned as money poured into the country but without any signs of long-term structural change."

The earthquake was followed by a cholera epidemic, several hurricanes and the withdrawal of U.N. forces, leaving many without jobs; civil unrest that continues to this day, said Sister Dohner, who now works among Haitians living in southwest Florida.

Efforts to improve Haiti continue on a small scale through nongovernmental organizations, "but there is no grand plan," she said, noting that "even the poor cathedral in Port-au-Prince still lies in ruins."

At the time of the earthquake, with cities destroyed and places of worship lost, "the world's eyes were opened to Haiti's poverty and devastation," said Felician Sister Marilyn Marie Minter, who works in the southern city of Jacmel.

"This brought many NGOs and others like our congregation into a relationship with the poorest of the poor," she said.

But, 10 years later, the nongovernmental organizations have gone, said Sister Minter. "Some of them made things a bit worse because they left behind more of a mess, and others, yes, made a difference to try and rebuild lives."

Sister Minter is part of a ministry the Felician Sisters of North America, set up in 2012 following shorter-term work that followed the earthquake.

"Our congregation responded with accompaniment in the Diocese of Jacmel to be about an evangelization that would walk with and be with and for the poor," she said, noting that "we are still poor here materially and, at times, spiritually."

The sisters' work includes education, faith formation and a mobile clinic, Sister Minter said. "Are kids still hungry? Sure, in some respects. The political situation this past year has not helped at all. In the midst of it all, life has stayed the same and, for some, has gotten worse. But for us, we feel we have been trying our best to continue to grow in our relationships with those we serve."

Through the Catholic Health Association, many congregations of sisters pooled considerable resources from throughout the United States -- not only millions of dollars but also tremendous health care expertise -- to plan and implement the building of a modern hospital in Port-au-Prince. They did so in collaboration with the local Port-au-Prince bishops and other Catholic health providers in Haiti.

What Haiti needs now is to strengthen its leadership, "and that's something we as sisters can help with," said Sister Sissy Corr, a Sister of Notre Dame de Namur who works with its Notre Dame Mission Volunteers ministry in Les Cayes.

"We've started doing many things we didn't think we could do at first. I never thought I'd be helping run an industrial-sized bakery. I don't even bake. But it's in our psyche as educators, as collaborators. We can see the potential in others," she said.

"We can also see beyond the immediate future," Sister Corr said, noting that so much in Haiti is about survival. "People just have to get through the day for themselves and their families. When you run a bakery, you need a team working together and thinking together. You need industrial-sized talent. The talent is there. I see it. And we have an eye for bringing out this talent."

Sister Fidelis Rubbo, a member of the Sisters of St. Francis of Sylvania, Ohio, who worked as a missionary in Haiti from 2001 to 2014, said she believes Haitians have hope that "has always come from their indomitable trust in God and their strong sense of family and community."

While most people who have visited Haiti are charmed with the country and its people, "it is sometimes harder for Haitians themselves to stay positive because the situation has gotten so dire," said Sister Rubbo. "But despite it all, they plug along, doing their best for themselves and their children. And they are so terribly grateful for every small thing you can do to help."

Sister Minter said the hope she feels is with the young people of Haiti.

"Our focus is to guide them to be leaders and respect what they can change and can't," she said, noting that "when you empower someone, they can grow in their leadership and discover their gifts."

Sister Lacey said she believes there is much hope in Haiti.

"The Haitian people are resilient, good-hearted, generous," she said. "Their spirit was not broken by the 2010 quake, by the (subsequent) cholera epidemics or by the pervasive corruption that holds the country in its grip."

Provide feedback on this article
Join the conversation: Login or create an account
Before you can comment, you need to update your profile to include your first and last name, as required in our comments policy. Then reload this page and you'll be set up for commenting. Update your profile
Advertisement
More: Haiti / Women Religious