The silent boy of Carradeux

The silent boy of Carradeux 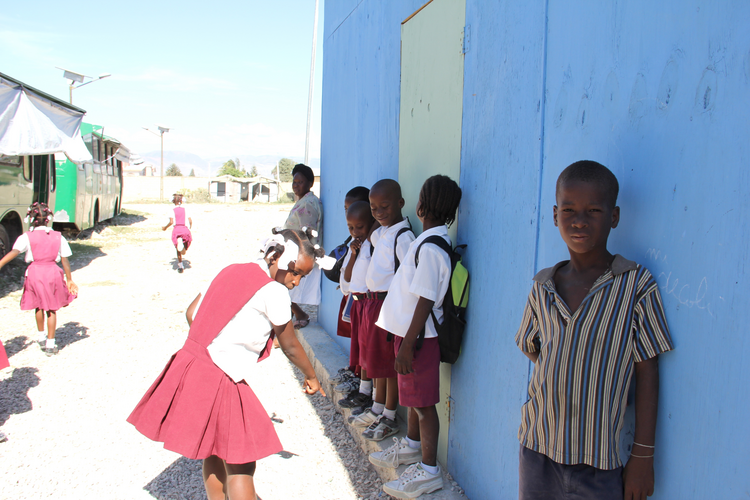 Today on a hillside overlooking Port-au-Prince, I met the boy who has no name. Scratch that, I’m sure he has a name, I just was unable to find it out. He began following me soon after I arrived at a camp in the city’s village of Carradeux, a place where hundreds of families have lived since the January 12, 2010 earthquake. Many are still living in the emergency shelters, the “igloos” and tents disbursed in the immediate aftermath of the catastrophe by emergency services. Many other families, however, have been fortunate enough to be placed in transitional shelters built by Catholic Relief Services that offer a little more comfort, stability and access to sanitation than the flimsy and vulnerable tents used by as many as 360,000 people in the city and dotted across the sun-drenched hillsides surrounding Port-au-Prince.

This little boy, who could not have been older than my second born eight-year-old and had his same lanky frame and disconcertingly serious face, came up to me and grabbed my arm. He gestured to a young woman passing by, a plastic basket full of some wares balanced expertly on her head, and grunted at me in an earnest appeal. Now I am not dumb enough to stop in a camp full of hundreds, perhaps thousands of displaced children, to reach in my pocket and pull out some currency to buy one child a toy or a treat, so I merely smiled broadly and gently pulled his hand off my forearm and shook my head. It was only after we had walked a few yards beyond her that I saw the young woman was carrying a basketful of sandals.

The little boy followed me through the rest of the camp, a place that was remarkably neat and organized, well-run by a committee of residents who were eager to show me their accomplishments and clearly proud of how far they had come under what were no doubt profoundly difficult circumstances. He followed me past rows of small homes, some brightly painted, sprouting small gardens in soil-filled car tires, virtually all modified in some way to improve their habitability over time. He followed me silently as we encountered a group of young children, pouring out of the camp’s school, smart in their school uniforms, cracking up at the sight of the foreign journalist and his welcoming committee approaching their modest row of six classrooms. The school was also built by C.R.S. and the committee members tell me it has been a godsend for this impromptu community. The children had been getting instruction within the superheated confines of a crowd of decommissioned buses from the Dominican Republic. Class was frequently interrupted by the scorching Haitian sun when it became too stifling inside the old green buses. Many parents in the past refused to send their children because of the “classroom” conditions. Now with the new classrooms, enrollment was way up and more were expected to join come January.

The boy’s silence and serious mien were troubling. His eyes followed my every move. He paused for my camera, but never smiled, merely kept regarding me in expectation. What was his name, I asked the committee members. None of them could say.

“He is from the top of the mountain,” one of them explained, translating for the children who were eager to share what they knew of him. The children explained that he came down for treats from visitors or from the U.N. security people who were encamped within the transitional community and they helped him find some and played with him, but none of them knew his name either. Was he deaf? Was he just mute? It was not clear except that he could not talk and he could not tell us his name and the children were running off for the keys so we could tour their new classrooms. As the other children wheeled and laughed around their visitors, the silent boy squatted nearby, watching the children’s frolic, neither joining in nor seeming to resent their gaiety. I found this enormously depressing.

“Their parents cannot send them to school,” she says. They cannot afford even this school’s meager tuition, she explains. What will happen to such children? They are destined for the streets and worse when they grow up, she says. “They become a danger to society,” she says. “The become bandits,” she adds solemnly.

And this boy I ask? The silent one? What will become of him?

He does not go to school, Madame Mercier says, blankly. In fact there is only one school in Port-au-Prince that can even offer an education to a mute and likely deaf boy like him, she says. His family could never afford such a place. The school might as well be on the moon.

If you are moved by America's reporting from Haiti this week and would like to help out, you can donate to Catholic Relief Services: http://www.crs.org . Put 'Haiti' in the special request field. Thank you.
Gabriel Marcella
7 years 8 months ago
Your dispatches from Haiti are heart rending. The human tragedy there is beyond belief and it challenges the international community to do more. The key is to employ creativity to promote sustainable davelopment, capacity building among Haitians, and fixing the environmental disaster. For example, a mere 2% of the original forest cover remains, while tropical storms wash away the topsoi, leaving less and less agricultural potential. Your comment that there are no government schools is also telling. The corrupt, predator state has been part of the problem in Haitian history. The creole word l'etat means predator.
Beth Cioffoletti
7 years 8 months ago
Start a fund, Kevin.  With this story and photo, ask for help in sending this boy to school.  When enough people know, just the change in our pockets will be enough to make a change for this one boy.
Patricia Rogan
7 years 7 months ago
I would like to know how much it would cost to educate this child in a deaf education school.  To whom should I write for more information?
Advertisement
More: Humanitarian Aid