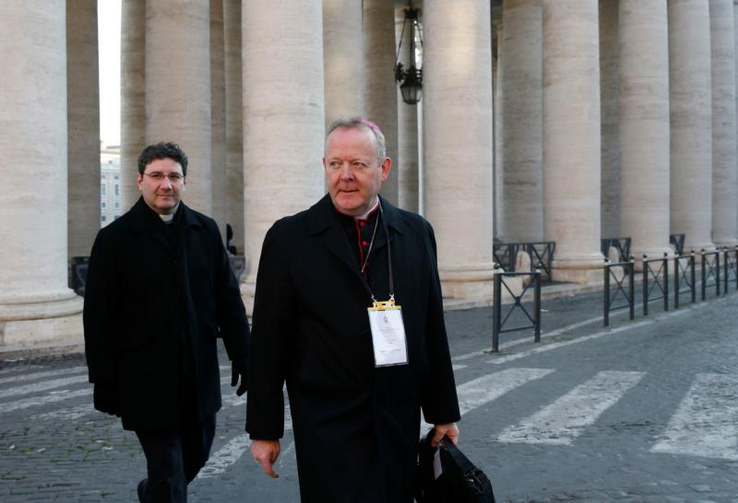 Archbishop Eamon Martin of Armagh, Northern Ireland, arrives for the opening session of the meeting on the protection of minors in the church at the Vatican Feb. 21, 2019. (CNS photo/Paul Haring)

DUBLIN (CNS) -- Archbishop Eamon Martin of Armagh, Northern Ireland, has welcomed a new political agreement that restores the suspended democratic institutions set up as part of the peace process in Northern Ireland.

The legislative assembly and governing executive -- established on a cross-community power-sharing basis between parties representing both the Catholic and Protestant communities -- collapsed more than three years ago due to a lack of trust between the parties.

However, on Jan. 10 the Irish and British governments -- co-guarantors of the 1998 Good Friday Agreement that brought an end to 30 years of sectarian strife that saw more than 3,500 people killed -- published a new set of proposals to restore trust. The following morning, the assembly met and elected a new minister.

Archbishop Martin joined with other church leaders in welcoming the new deal as "a balanced accommodation that is focused on the common good."

Along with leaders of the other mainline churches, he said he hoped the reestablishment of the institutions "can begin to address the political and social crisis that has developed due to the prolonged absence of a functioning executive and assembly."

The region has suffered a severe crisis in both education and health care in recent years due to a chronic lack of funds and the absence of decision-makers.

In a joint statement, the church leaders warned that "the principles of accountability, transparency and responsibility, identified in the agreement, are crucial to underpinning sustainable government and ensuring that the experience of the last three years cannot happen again."

"Along with the development of trust and generosity of spirit, these measures offer an opportunity to build a peaceful and just society that is centered around respect and recognition of each other's cultural identity," the leaders said.

They said the deal "is a sign of welcome progress that provides an opportunity for a new start for Northern Ireland's political institutions and one that can also offer fresh hope."

"The story of the Christian faith is one of new beginnings, where failure is never final, second chances abound, and all things can be renewed. We will continue to offer our prayers for all involved in making this agreement work, encouraging them, for the sake of the whole community, to grasp fully this new opportunity," the statement added.

As well as Archbishop Martin, signers included Anglican Archbishop Richard Clarke of Armagh; the Rev. William Henry, moderator of the Presbyterian Church; and the Rev. Sam McGuffin, president of the Methodist Church of Ireland.

Show Comments ()
Comments are automatically closed two weeks after an article's initial publication. See our comments policy for more.
Provide feedback on this article
Join the conversation: Login or create an account
Before you can comment, you need to update your profile to include your first and last name, as required in our comments policy. Then reload this page and you'll be set up for commenting. Update your profile
Advertisement
More: Ireland