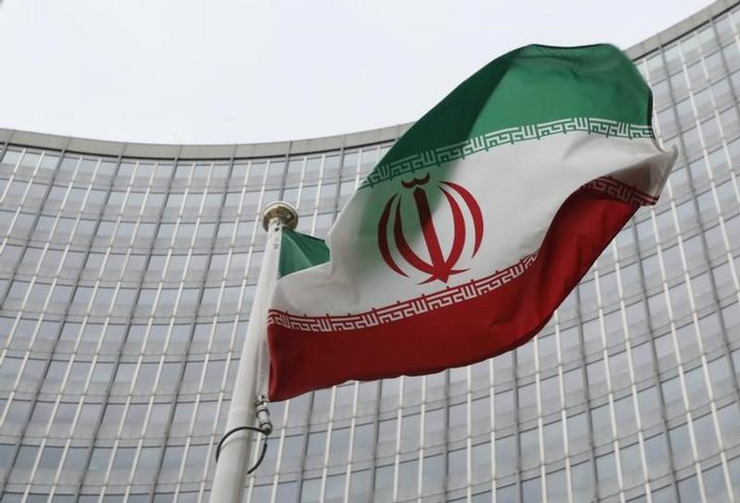 The flag of Iran waves in front of the International Atomic Energy Agency headquarters in Vienna, Austria on Jan. 15, 2016. (CNS photo/Leonhard Foeger, Reuters)

In the wake of the U.S. drone strike that killed Iranian Maj. Gen. Qassim Suleimani in Baghdad on Jan. 3, Iran announced that it would enrich uranium beyond the restrictions of the 2015 nuclear deal, officially called the Joint Comprehensive Plan of Action. In the nation’s most recent push against the nuclear agreement, Foreign Minister Javad Zarif, who negotiated the deal, tweeted on Jan. 5 that “there will no longer be any restriction on [the] number of centrifuges” in Iran.

President Trump, who withdrew the United States from the deal in May 2018, has been a frequent critic of the J.C.P.O.A., calling it “a horrible one-sided deal.” Speaking from the White House on Jan. 8 in response to the Iranian reprisal attack on two U.S. military bases in Iraq, Mr. Trump called on China, Russia, Germany, France and the United Kingdom to “break away from the remnants of the Iran deal” and work for a new deal “that makes the world a safer and more peaceful place.”

But the European Union, at a meeting in Brussels that same day, made clear its intention to salvage the existing agreement. “It’s one of the most important tools of nonproliferation and regional security,” said Josep Borrell, the E.U. foreign affairs leader. Ursula von der Leyen, the president of the European Commission, added that the European Union “will spare no efforts” to keep the deal afloat.

“From a European viewpoint, it is important for Iran to return to the nuclear deal,” said Ms. von der Leyen earlier on Jan. 6. “We have to convince Iran that it’s also in its own interest.”

The future of the J.C.P.O.A. looks bleak to some observers. Holger Schmieding, the chief economist at Berenberg Bank, called the deal “largely dead,” while France’s minister of Europe and Foreign Affairs, Jean-Yves Le Drian, has recently questioned “the long term validity of this [nuclear] accord.” Proclamations of the deal’s demise are not new. In April 2019, the editorial board of Bloomberg declared: “The Iran Deal Is Dead. Democrats Should Move On.”

But Kelsey Davenport, the director for nonproliferation policy at the Arms Control Association, thinks there is a future for the J.C.P.O.A., a deal, she said, is worth preserving.

“From a European viewpoint, it is important for Iran to return to the nuclear deal,” said Ms. von der Leyen earlier on Jan. 6. “We have to convince Iran that it’s also in its own interest.”

“The nuclear deal is not dead. Iran has violated it and those breaches are serious, but Tehran continues to reiterate that they’ll return to compliance with their obligations if their demands on sanctions are met,” she said on Jan. 10.

“The Europeans have rightly acknowledged that Iran continues to abide by key monitoring and verification provisions set out in the nuclear deal,” Ms. Davenport said. “Iran’s nuclear program is still under a microscope, and this provides assurance that if Tehran were to dash for a nuclear weapon, the international community would detect those movements quickly and have time to respond.”

Iran’s latest step away from the accord—forged during the Obama administration by negotiators from the United States, China, Iran, France, Russia, the United Kingdom and Germany—follows past actions taken by Iran in violation of the deal’s terms.

In November 2019, Mr. Rouhani announced that his country would inject uranium hexafluoride gas into centrifuges at the Fordow Fuel Enrichment Plant near the city of Qom, an action that signaled Iran’s move toward uranium enrichment and growing disregard for the provisions of the nuclear deal.

“Iran has taken several steps this year to reduce its nuclear obligations under the pact, which curbed Iran’s atomic energy program in exchange for widespread sanctions relief,” reported The Washington Post on Nov. 5.

While Ms. Davenport said that Iran’s violations of the J.C.P.O.A. are “serious,” she said, “There is no evidence that Iran is pursuing a nuclear weapon at this time.”

“There is no evidence that Iran is pursuing a nuclear weapon at this time," said nonproliferation policy expert Kelsey Davenport.

“Iran has the capability to pursue a nuclear weapon, and they’ve had a nuclear weapons capability since 2007, according to the U.S. intelligence assessment. So the real question needs to be: How do we prevent Iran from making that choice?” she said.

Iran also claims, at least publicly, that it is not seeking to be a nuclear power. “[Iran is] not interested in having a nuclear weapon because we have a very...clear-cut religious edict by our supreme leader prohibiting nuclear weapons,” Majid Takht-Ravanchi, Iran’s ambassador to the United Nations, told PBS Newshour on Jan. 6.

Still, Ms. Davenport said that the collapse of the deal would prompt “a manufactured nuclear crisis in the Middle East.”

“If the J.C.P.O.A. collapses, Iran will still be bound by its international [and] legal obligations not to pursue nuclear weapons within the Nuclear Nonproliferation Treaty and to have a safeguard agreement enforced which gives inspectors limited access to Iran’s nuclear activities,” she said, adding that Iran did breach these laws in the past to “secretly pursue nuclear weapons up through 2003.”

The Iran deal has found support among Catholic leadership. Bishop Oscar Cantú, then-chairman of the U.S. bishops’ Committee on International Justice and Peace, praised the agreement in 2015: “This significant achievement aims to curb Iran’s development of nuclear weapons while allowing them to use nuclear energy for peaceful purposes.”

Bishop Cantú viewed the deal as “progress in global nuclear non-proliferation,” a major concern of Pope Francis. The pope discussed the deal, which he described as “solid hope for the future,” with Mr. Rouhani at the Vatican in 2016.