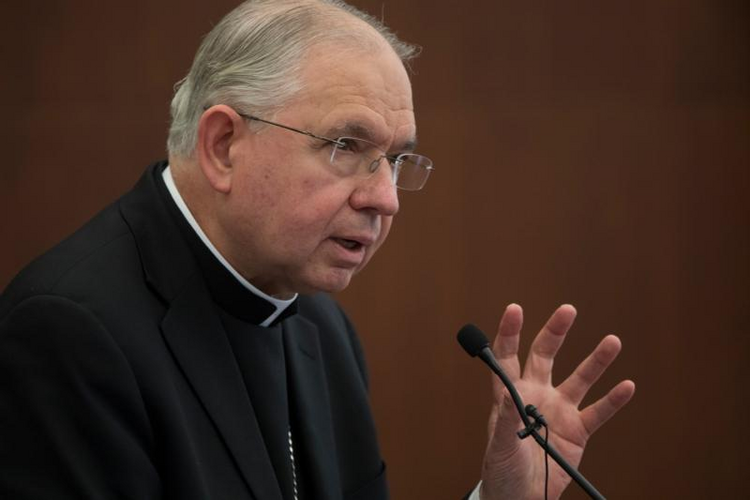 Archbishop Jose H. Gomez of Los Angeles speaks during a lecture at The Catholic University of America in Washington Feb. 6, 2019. (CNS photo/Bob Roller)

"In the face of the escalating tensions with Iran," he said, people should join him in "asking our Blessed Mother Mary, the Queen of Peace, to intercede, that Jesus Christ might strengthen the peacemakers, comfort the suffering, and protect the innocent and all those in harm's way, especially the men and women in our military and diplomatic service."

Iran's missile launch -- Jan. 8 in Iraq, late Jan. 7 in the U.S. -- was said to be in retaliation for Washington's targeted killing of Iran's top militia commander, Maj. Gen. Qassem Soleimani, in Baghdad Jan. 3. The missiles hit the al-Asad airbase, which houses U.S. troops, and American and coalition forces in the northern Iraqi town of Irbil, in areas not heavily populated.

During his general audience Jan. 8, Pope Francis also addressed the current situation in Iraq, offering "a warm welcome to the Arab-speaking pilgrims, especially those from Iraq, Lebanon, Syria and the Middle East."

"In the saddest moments of our lives, in the most distressing moments and of trial, we must not be afraid and be bold as Paul was, because God watches over us, he is always close to us. May the Lord bless you all and always protect you from the evil one," he said.

President Donald Trump addressed the nation Jan. 8, calling on the world to pursue a path to peace in the Middle East. He urged the nations that remained part of the so-called P5+1 pact that limited Iran's development of nuclear weapons -- the United Kingdom, France, China, Russia plus Germany -- to "break away" from the deal and negotiate a new agreement that would allow Iran "to thrive and prosper."

"We must all work together to making a deal with Iran that makes the world a safer and more peaceful place," he said.

The president also called on NATO to "become much more involved" in Middle East affairs, without elaborating on how that could be accomplished.

Pointing to the development of new weapons systems, Trump said the U.S. was prepared to defend Americans in the region, but that military action would not be the nation's first response. "The fact that we have this great military equipment does not mean we want to use it," he said.

He announced, again without detail, that new economic sanctions would be sought against Iran with the goal of ending the conflict in the region.

Show Comments ()
Comments are automatically closed two weeks after an article's initial publication. See our comments policy for more.
Provide feedback on this article
Join the conversation: Login or create an account
Before you can comment, you need to update your profile to include your first and last name, as required in our comments policy. Then reload this page and you'll be set up for commenting. Update your profile
Advertisement
More: Bishops / Iran / Middle East / War & Peace