Catholic leaders speak out as tensions escalate between the U.S. and Iran 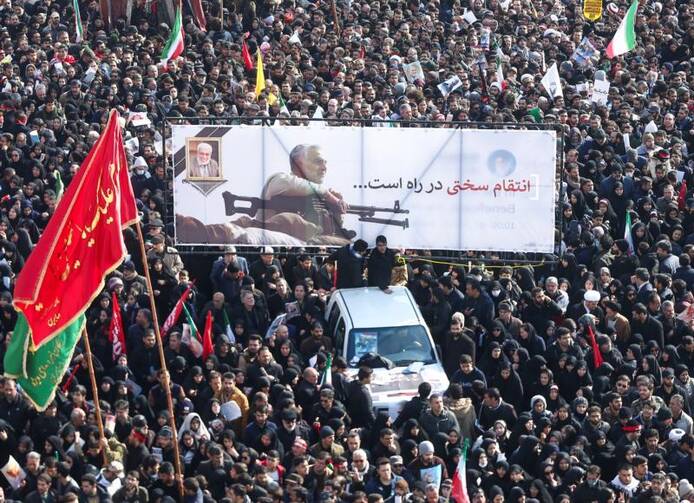 Catholic leaders and organizations have condemned a U.S. drone strike in Baghdad on Jan. 3 and the saber-rattling between the United States and Iran it has provoked. Johnny Zokotvich, the executive director of Pax Christi USA, deplored what he characterized as the assassination of Maj. Gen. Qassim Suleimani, the leader of the Quds Force of Iran’s Islamic Revolutionary Guard Corps, as an act opposed to “everything we stand for as people of faith” and as “incompatible with the message of Jesus.”

In a statement released on Jan. 3, Mr. Zokovitch demanded that U.S. political leaders “seek real diplomatic and humanitarian solutions to the current crisis and refrain from further military confrontation with Iran.”

Pope Francis, without directly naming the United States or Iran, prayed for peace from St. Peter’s Square on Jan. 5. “War only brings death and destruction,” he said. “I call on all parties to keep alive the flame of dialogue and self-control and avoid the shadow of enmity.”

The airstrike by American forces has inflamed tensions between the United States and Iran and prompted fears of further reprisal and escalation. President Trump has asserted that General Suleimani was engaged in plots against U.S. citizens and was “both hated and feared” in his native Iran.

On Jan. 4, Secretary of State Mike Pompeo told Fox News that General Suleimani was orchestrating “an attack that was imminent that could have killed dozens or hundreds of Americans.”

The imminence of this alleged plot has been disputed by some of the administration’s critics.

On Jan. 3, Patricia McDermott, R.S.M., the president of the Sisters of Mercy of the Americas, described the U.S. strike as “reckless,” saying it would not bring about peace. “We call on our government to reject militarism and instead to engage in the hard work of diplomacy,” she wrote.

The U.S. Conference of Catholic Bishops has not commented directly on the escalating tensions between the United States and Iran this week. “It does not appear that [the conference] plans to release a statement as of yet,” a U.S.C.C.B. spokesperson told America Monday, adding that conference staff were “monitoring” the situation.

In a letter to Secretary of State Mike Pompeo in June 2019, Archbishop Timothy P. Broglio, former chair of the bishops’ Committee on International Justice and Peace, argued that a “new approach” to Iran was needed. “The church consistently champions dialogue and engagement as ways to resolve political crises,” the archbishop said.

“War only brings death and destruction,” Pope Francis said. “I call on all parties to keep alive the flame of dialogue and self-control and avoid the shadow of enmity.”

“Our teachings on war and peace only permit the use of military force as a ‘last resort’ and in situations where there is a ‘probability of success.’"

“There is little probability,” he added, “that another war in the most volatile region in the world, where the recent and current experiences of conflict in Syria, Iraq and Yemen are vivid, will succeed in bringing peace to the region.”

The conference has in the past raised questions about the morality of U.S. drone strikes. “Applying deadly force without clear evidence of an imminent attack is contrary to both the rules of just war and international humanitarian law,” the bishops argued in a January 2014 statement.

“The Compendium [of Catholic Social Teaching] reminds us that ‘engaging in a preventive war without clear proof that an attack is imminent cannot fail to raise serious moral and juridical questions’ (No. 501).”

Members of the international Catholic community have also spoken out in the aftermath of the U.S. strike. The apostolic nuncio to Iran, Archbishop Leo Boccardi, called the current climate in Iran “worrying,” adding that the U.S. attack “further complicates the situation in the region, which truly appears to be intensely heated.”

In Baghdad during the Mass of Epiphany on Jan. 6, Louis Raphaël I Sako, the patriarch of Chaldean Catholic Church in Iraq, called for “all the parties concerned to exercise restraint, show wisdom and act rationally.”

Speaking at St. Joseph Cathedral in the Iraqi capital, the patriarch urged world leaders to avoid a further escalation in violence because, he said, “innocent people will be the fuel for such fire.” He said the current crisis resulted from the “upsetting escalation, as well as the emotional and impulsive decisions taken which lacked wisdom and the sense of responsibility.”

Louis Raphaël I Sako, the patriarch of Chaldean Catholic Church in Iraq, called for “all the parties concerned to exercise restraint, show wisdom and act rationally.”

At the funeral of General Suleimani, marked by the presence of thousands of Iranian mourners, the leader of Hamas, Ismail Haniyeh, called the general “a martyr of Jerusalem.” Ayatollah Ali Khamenei, the supreme leader of Iran, threatened “harsh retaliation” for the U.S. strike, a threat supported by Iranian President Hassan Rouhani.

The fallout from the airstrike has been swift:

Correction, Jan. 6: A previous version of this article misidentified Archbishop Timothy P. Broglio as the current chairman of the bishops’ Committee on International Justice and Peace. The newly elected chairman is Bishop David J. Malloy.