The U.S. killing of Soleimani could have devastating consequences for Iraq’s Christians 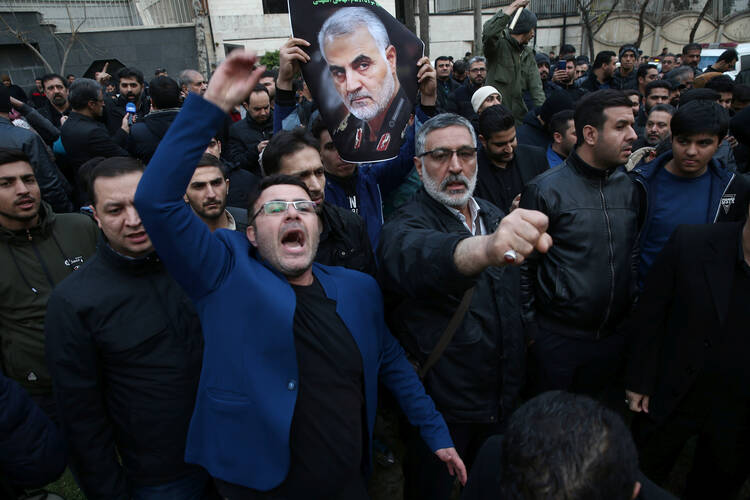 Following the news reports last night that eventually confirmed that a U.S. drone strike on Jan. 2 had killed Qasem Soleimani, leader of the Islamic Revolutionary Guard Corps’ Quds Force, and associates including Abu Mahdi al-Muhandis, the deputy head of the Iran-backed Iraqi Popular Mobilization Forces, I found myself hoping that someone in the Trump administration was remembering the perilous status of the Christian remnant in northern Iraq.

Christians in Nineveh province have just begun over the last year or so to trickle back to communities that had been devastated first by ISIS then by the Iraqi and U.S. coalition forces that drove ISIS—if not out of the country, then at least back underground. The forces which helped defeat ISIS over two years of fighting included the same Shiite militia that had been targeted by the Trump administration over the last week.

While the United States prepares itself for reprisals, I wonder if any attention is being paid to the vulnerability of the region’s remnant Christians.

Some of these militias were built locally from volunteers who emerged from Nineveh’s Christian and Shabak communities (the Shabak are an ethno-religious group, primarily Shiite, long resident in northern Iraq); some militias came north to Nineveh to fight ISIS from Shiite strongholds in the south of Iraq. They had been at first welcomed because they often took the lead in the combat that finally suppressed the ISIS extremists by the end of 2017.

The militias, known as popular mobilization forces (P.M.F.), helped liberate Christian villages and towns, then remained to become a new, at times menacing presence in Nineveh. Some halfhearted efforts have been made to remove them or contain their power, but the militias remain out of the control of the central government in Baghdad. Many of the militias are clearly following orders issued in Tehran.

When I visited the region in October 2018, meeting with Assyrian, Syriac Catholic and Orthodox leaders and average Christians, many told me how tired they were of being treated as second-class citizens in their own country, even in Kurdistan, where thousands found refuge from the ISIS rampage. Frequently blamed for acts from embargos to air strikes conducted by Western powers, they worried about the lingering threat from the “shaved beards,” members of ISIS who melted back into the local Sunni population, often literally after shaving off the beards required by their extremist interpretation of Islamic law.

Christians have just begun to trickle back to communities that had been devastated first by ISIS then by the Iraqi and U.S. coalition forces that drove out ISIS.

But they were also deeply concerned about the rising power and presence of the Shiite militias, especially in towns that formally were predominantly Christian but were rapidly transitioning to Shiite Muslim control. Many communities are uneasily shared with Shabak moving in from the countryside and with members of the P.M.F. and their families, apparently settling into Nineveh permanently. Some of these militia groups are now being directly targeted by the United States. How will they retaliate?

While the United States prepares itself for reprisals, it is an open question if any measures are being taken to respond to the vulnerability of the region’s remnant Christians. Iraq’s Christian community has been devastated by decades of conflict between Iraq and Western powers, beginning with the ground and air campaigns of the 1990s, ordered by George H. W. Bush and Bill Clinton, and accelerating in the aftermath of George W. Bush’s invasion of Iraq in 2003. Once nearly 10 percent of Iraq’s population, Christians were counted in the millions; now they can be counted in the thousands.

When I was in Iraq a little over a year ago, a Jesuit priest joined a conversation about how to restore Nineveh’s Christians. “We can’t just rebuild houses,” he told me in the city of Erbil. “We have to rebuild community,” he said, expressing a hope to restore normalcy between the Christians and Shabak Shiites who had once been neighbors.

At the end of 2019, that delicate process had been underway and the imperiled Christian minority was just starting to get back on its feet in Nineveh. But an expanded conflict in Iraq between Iran and the United States could provoke reprisals from their Sunni and Shiite neighbors that will ultimately put an end to Christianity in Iraq. Let us hope someone in Washington is working on a contingency plan to prevent that, as the United States seems on a course to a new and undeclared war in the Middle East.

@ClarkeAtAmericaclarke@americamedia.org
Show Comments ()
Join the conversation: Login or create an account
Before you can comment, you need to update your profile to include your first and last name, as required in our comments policy. Then reload this page and you'll be set up for commenting. Update your profile
Show Comments ()
Comments are automatically closed two weeks after an article's initial publication. See our comments policy for more.