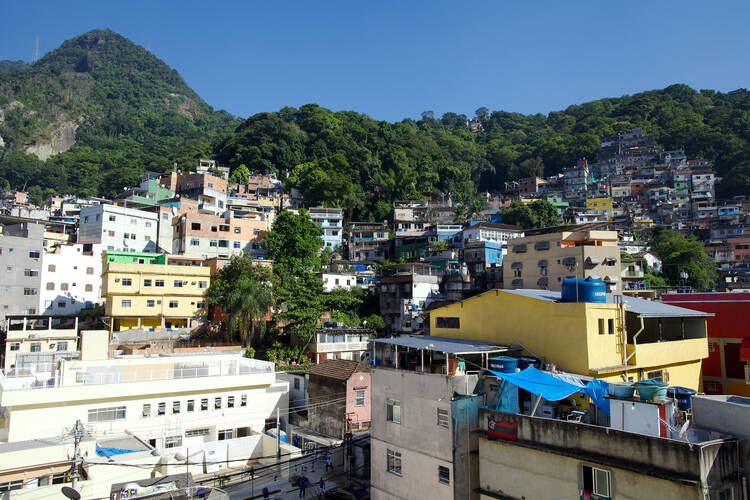 About 70,000 people live in Rocinha, making it the most populous favela in Rio de Janeiro. iStockphoto

Between January and October, 1,546 people were killed by police in the State of Rio de Janeiro, most of them during operations in favelas, or poor, often-hillside neighborhoods of precarious houses and shacks that are home to at least 1.4 million Rio residents. The increasing number of fatal acts of police are among the emerging concerns addressed by the Pastoral of Favelas, an archdiocesan commission created 42 years ago to respond to the needs of Rio’s slum dwellers.

“Our main focus has always been housing, but violence and death are capable of putting an end to any idea of [human] dignity that we may be [defending],” said Msgr. Luiz Antônio Pereira Lopes, who coordinates the pastoral commission. “Many relatives of police victims have came to us in the past months, hoping that we can help their voices to be heard by the authorities.”

Unfortunately, according to the monsignor, that is not the case anymore. Since the state’s new governor, Wilson Witzel, assumed office last January, dialogue between human rights organizations such as the Pastoral of Favelas and the government has been completely cut off. Mr. Witzel was elected in 2018 on a platform promoting zero tolerance of crime in Rio, promising not to punish police officers who “shoot down” suspects carrying rifles—a common scene in many of the favelas that are controlled by criminal gangs.

“The right thing to do is to kill the criminals who carry rifles,” Mr. Witzel said in an interview with the newspaper O Estado de São Paulo in November 2018. “The police will act correctly: [They] will aim at the head and...fire!”

The increasing number of fatal acts of police are among the emerging concerns addressed by the Pastoral of Favelas, an archdiocesan commission created 42 years ago to respond to the needs of Rio’s slum dwellers.

On Dec. 5, the Supreme Court demanded clarifications from the governor concerning his security policies. Mr. Witzel’s response, however, has not yet been made public.

At the beginning of 2019, the police intensified interdiction operations against drug traffickers in the favelas, and a record number of deaths soon followed. In July alone, 194 people were killed by police, the highest number for a single month since the government started monitoring police killings in 1998. Sadly, children like 8-year-old Ágatha Félix—shot dead by a police officer in September—have been among the accidental victims of this zero-tolerance policy.

At the end of August, Mr. Witzel’s Civil Police secretary, Marcus Braga, in an interview with TV Globo, acknowledged the trend in increasing deaths of civilians caused by the police. “It’s a high number; it’s not the number we desire,” he said.

According to Mr. Braga, measures such as better coordination of the Civil Police with the Military Police and increasing attention to intelligence gathering should reduce police killings in the future. But in September, Mr. Witzel affirmed again that criminals would be “hunted in the [favelas],” and he terminated a bonus system that had been in use to reward police officers who took precautionary measures to reduce the number of civilian deaths during confrontations.

According to the historian Mario Brum, who has studied the role of Pastoral of Favelas in Rio life, the commission’s power “is much limited” when it comes to concrete action concerning police violence. “It’s up to the church as a whole to have a stronger institutional stance on this,” Mr. Brum said.

“In the past decade, the violence of confrontations between drug traffickers and policemen worsened with the rise of another group, the militias,” said Luiz Severino da Silva, a pastoral worker in the slums since the 1990s. Militias are criminal gangs formed by police officers and former police officers. “Life in the favelas is very disturbed” by their presence, he said.

Violent police operations—many times snipers shoot from an armored helicopter that overflies the favelas—have been accompanied by a similarly rough treatment of slum residents by the housing agents of the city government.

According to Monsignor Lopes, violent police operations—many times snipers shoot from an armored helicopter that overflies the favelas—have been accompanied by a similarly rough treatment of slum residents by the housing agents of the city government.

The vast majority of Rio’s favelas began as informal occupations of municipal land, usually along hillsides that are not desirable property for formal development, and their residents lack deeds and construction permits. “Many residents have been complaining that city government officials want to expel them from the favelas, claiming that they were built in areas with risk of landslide,” said Monsignor Lopes.

“But residents don’t want to leave. They have a feeling of belonging to those places. What they want is the regularization and urbanization of the favelas,” Mr. Silva explained. Some residents have lived in their favelas since the 1960s, he said.

Since its creation in the 1970s, the Pastoral of Favelas has been helping Rio’s slum dwellers to organize and fight for decent housing. The commission was one of the main forces behind the foundation and reorganization of several associations of residents, which represent each favela in the dialogue with the government, according to Mr. Brum. At the same time, the commission was an expression of the presence of the church among great portions of the population of Rio de Janeiro.

“It developed side by side with the movement of the basic ecclesial communities [C.E.B.s, in Portuguese] and liberation theology and functioned as a kind of umbrella social movement for many popular activists,” Mr. Brum said.

Despite many accomplishments over the years, in the past few decades the Pastoral of Favelas saw many of the neighborhood associations it helped create taken over by crime gangs, militias and the government. Another challenge for the commission has been the rapid transformation of religious identity in the State of Rio de Janeiro.

The commission’s power “is much limited” when it comes to concrete action concerning police violence. “It’s up to the church as a whole to have a stronger institutional stance on this.”

Monsignor Lopes explained that the commission has been experimenting with different strategies to enhance its presence in the slums. “One of our most interesting forms of organization is the biblical circle, a small group that we create in each set of streets of a favela to weekly bring residents together in prayer,” he said.

The biblical circles help slum dwellers experience their faith without having to go too far from their houses, he said, explaining that this reduces the risk of being accidentally shot by criminals or by the police. Priests visit each chapel from time to time to celebrate Mass and to talk about the problems of the favela. Social services, such as distribution of meals for needy neighbors, are also centralized at the local chapel.

“We work from the perspective of the Word of God and of the transformation of local reality. Maybe this way we can start growing again, given that most evangelicals don’t worry about the concrete conditions of life of the people,” the monsignor said.

Chile is reeling from protests. Where is the Catholic Church?
Eduardo Campos Lima

For Eliana Meireles, a 51-year-old resident of Rocinha—one of Brazil’s biggest favelas—the pastoral’s social approach was the main reason she decided to join the commission in 2012. “In the 1980s, I was part of a parish which had a very deep commitment with social matters. It was a church which always stimulated joint efforts to help the people and included a C.E.B. After many years, I found this church again when I encountered the Pastoral of Favelas,” she said.

Ms. Meireles thinks that the church has to come up with new models, given that most people, according to her, only join the pastoral when there’s a serious threat to their lives—for instance, when the city government threatens to demolish houses or remove an entire favela. “In order to keep people engaged, particularly young people, the church has to create something new.”

But there’s a rising trend of favela removals in Rio at this moment. In Mr. Silva’s opinion, the increasing pressures on the favelas is the result of a “growing interest in many city lands that can now reach high prices in the market.” For Mr. Brum, there is also an increasing prejudice among part of the Rio elite against favela residents.

“A part of the society doesn’t want to have a favela near its neighborhood,” he said.

One of the commission’s tasks in this context is to remind particularly the Catholic people that all lives have dignity that must be respected. “Including the lives of criminals and suspects,” Monsignor Lopes said. “The residents of favelas are continually disrespected by the absence of the government and of its services. We struggle to make the presence of the church felt there.”