Chile is reeling from protests. Where is the Catholic Church? 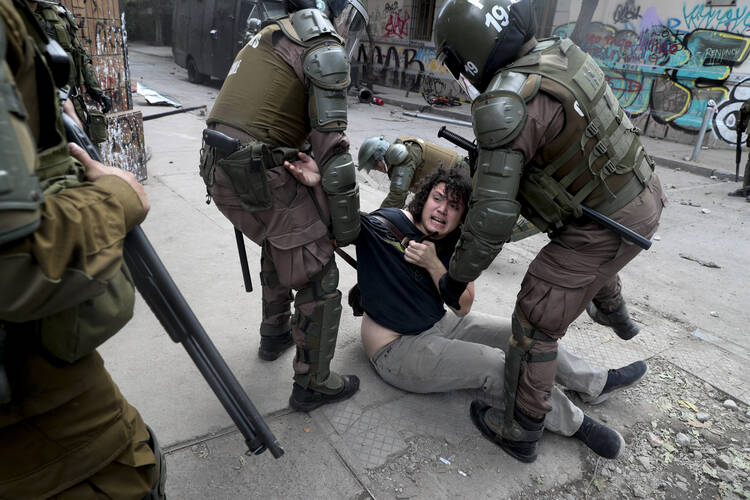 Police detain a demonstrator during an anti-government protest in Santiago, Tuesday, Nov. 5, 2019. Chileans have been taking to the streets and clashing with the police to demand better social services and an end to economic inequality, even as the government announced that weeks of demonstrations are hurting the country's economic growth. (AP Photo/Esteban Felix)

The wave of mass protests sweeping across Chile since October reflect a culmination of years of serious social and economic dissatisfaction. The unprecedented demonstrations have provoked a broad public debate as analysts attempt to make sense of the sudden unrest. But one voice struggles to make itself heard in the civil discussion—the once formidable Chilean Catholic Church.

In a series of statements issued since the demonstrations began Chilean Bishops have condemned the violence exhibited by some protesters but expressed a sympathy for their frustration. The bishops’ conference has urged political leaders to step up to their responsibility to preserve the common good and deplored acts of anarchy and looting, most recently directed against church sites themselves. But is anyone listening to it?

Jorge Costadoat, S.J., a researcher at the Theological Center Manuel Larraín, sees the current unrest as the rotten fruit of decades of extreme neo-liberal economic policies—“probably too radical even for Milton Friedman”—first instituted by the dictator Pinochet in the 1970s but renewed for decades by the democratically elected administrations that followed his regime.

“At the same time, the very socially committed episcopate Chile had in the 1970s and in the 1980s was replaced by [politically and socially] conservative bishops with a focus on sexual morality,” he said. In 2018, revelations of decades of sexual abuse perpetrated by members of the Chilean clergy and covered up by the Catholic hierarchy led to the resignation of seven bishops and the investigation of dozens of priests, bishops and lay people by authorities.

Chilean bishops’ have urged political leaders to step up to their responsibility to preserve the common good and deplored acts of anarchy and looting. But is anyone listening to them?

In Father Costadoat’s assessment, after three decades obsessing over sexual morality and ignoring Chile’s social and economic inequities, “the sex abuse scandals destroyed all credibility of the church.” These days, according to Father Costadoat, the Chilean press does not even look for the opinion of members of the clergy when seeking commentary on the nation’s major social challenges.

The impact of the 2018 scandal on the church’s reputation and credibility has been broad. “This huge crisis equally affected [social] conservatives and [social] progressives in the church,” said the Rev. Cristian Eichin, a theology professor at the Pontifical Catholic University of Valparaiso. “So, only a few statements were made by the church and by its pastors, mostly lacking a stronger and prophetic voice,” he added.

Perhaps a sign of how far the church has fallen in public esteem has been the willingness of some looters and protesters to break into Catholic churches in recent days. On Nov. 8 pews and statuary from the Church of the Assumption in Santiago were thrown into the street and set to flame as barricades against security forces. In Valparaiso, demonstrators invaded another church and dragged its pews into the street, setting fire to them.

Despite expressing sympathy with the protestors, the Catholic Bishops Conference of Chile condemned the desecration of the two churches: “We are hurt by the mistreatment of people, constant looting and violence, wherever it comes from; it hurts when our churches and places of prayer are attacked without respect for God and for those who believe in Him. Churches and other places of worship are sacred,” they said.

Invoking, through prayer, God’s forgiveness for the perpetrators of the church looting, the bishops added: “Together with many Chileans, we are radically opposed to injustice and violence; we condemn them in all their forms and we expect the courts to identify those responsible and punish them.”

The bishops added that the continuing violence “prevents us from giving the right amount of attention to the claims of the majority of the Chilean people who yearn for real and peaceful solutions.”

“Taking sides with the poor again, the Catholic Church will recover its credibility.”

In order to restore civil coexistence, the bishops urged Chilean authorities “to apply the law and exercise it using all the resources of a democratic state. People are not only tired of injustice, but also of violence and the vast majority eagerly awaits dialogue to rebuild the social fabric.”

The demonstrations in Chile began in early October after the government announced an increase in Santiago’s mass transit prices. By Oct. 18, hundreds of thousands of people were in the streets of the capital in what had become a broad anti-government protest, and officials declared a state of emergency in an effort to regain control.

Since then Chilean cities have experienced daily protests against the high cost of living, inadequate and out-of-reach health services and medicines, insufficient pensions and political corruption. Protesters have demanded the resignation of President Sebastian Piñera, and his approval rating has plummeted to 14 percent.

By the end of October, the Chilean bishops’ conference released two statements concerning the social unrest. The first one went out only a day after the first mass protest, condemning the violence on the part of some demonstrators, that according to the statement included “aggression against people, destruction of goods, looting of stores and the privation of hundreds of thousands of fellow countrymen of a transportation service which is basic for the operation of the city.”

At the same time, the bishops’ statement called for the understanding of “such violence,” pointing to the suffering of the Chilean society in “matters of work, health, citizen security, education, housing, pensions, poverty and the humanitarian challenges of immigration.”

The second statement from the bishops, released on Oct. 24, called for the “reestablishment of public order” and the “end of bloodshed”—at least 23 people have been killed since the beginning of protests. According to the National Institute of Human Rights, 2,009 people have been injured—including 197 with eye injuries—and 5,629 have been arrested. Human rights activists have denounced several cases of police brutality during the demonstrations, and video footage posted on the internet showed policemen violently hitting protesters.

“In the last few years, the Chilean Church has been issuing very neutral statements, which can’t address the needs of the people,” said Ronald Villalobos, O.F.M., of Santiago. According to Friar Villalobos, who took part in several marches, it is important to remember that the demands of the people are valid.

“Of course, there are people who get in the protests to take personal advantages, but the nature of the movement is peaceful—and the reaction of the police has been disproportionate,” he told America.

Agustín Moreira, S.J., said there remains good news about the status of the church in Chilean society. Many Catholics are continually working to build social harmony in Chile, if quietly, he said.

“Many Catholic institutions, such as the universities, are functioning as spaces of dialogue and reflection on the current unrest,” Father Moreira said. “At the same time, missionaries throughout the country have been working with the most poor and marginalized people in society, listening to their needs and demands.”

According to Father Moreira, these are not efforts that draw much attention from Chilean media, but they have been consistently performed for years and point a way out of the current crisis. “Taking sides with the poor again, the Catholic Church will recover its credibility,” he said.

Dissatisfied with the role played by the Chilean church’s episcopal leadership, individual members of the Chilean clergy have launched their own initiatives. A group of theologians released a statement entitled “Chile is not at war,” in a reference to the right-wing President Sebastian Piñera’s statement that “Chile is at war against a powerful and implacable enemy,” words that could only inspire dread among Chileans who remember the Pinochet years.

“We demand that our authorities stop the militarization of the streets, that they don’t criminalize and don’t repress the legitimate and peaceful demonstrations, that they listen attentively to the country’s unrest and that they put themselves at service to attend the largely unanswered requests,” read the statement.

The Chilean church has lost its credibility. Bishop Aos is hopeful he can change that.
Gerard O’Connell

“This letter was signed by ministers of several Christian denominations; it’s an ecumenical effort. The church must learn to act in network with other churches,” said Father Eichin, one of the signatories of the statement.

In Santiago, Friar Villalobos and his colleague Luís Cisternas, O.F.M., have been debating issues related to the crisis with their communities and marching with the people when possible. “This movement has no leaders and no parties leading it,” Friar Cisternas said.

“It comes from the people. This is a lesson for us in the church and can point a way for us. The church is not only about hierarchy and clergy. Maybe we should strengthen our community dimension and reduce clericalism.”

Friar Cisternas explained that while the bishops have not sided with the demonstrators, other organizations, like the Conference of Religious Women and men of Chile and recently formed alliances, have been more active in the crisis.

“I think the current events awakened the people to collectively debate their problems, and this is very positive,” said Friar Villalobos. “Over decades, Chilean Catholicism has been all about sacraments and had almost no relation with the social reality.”

He believes now could be a good time for the church to reassert itself in Chile to take a stand on those realities. “I think it’s a great opportunity for the country and for the church.”