Presidential debate to continue at L.M.U. after labor dispute resolved

Presidential debate to continue at L.M.U. after labor dispute resolved 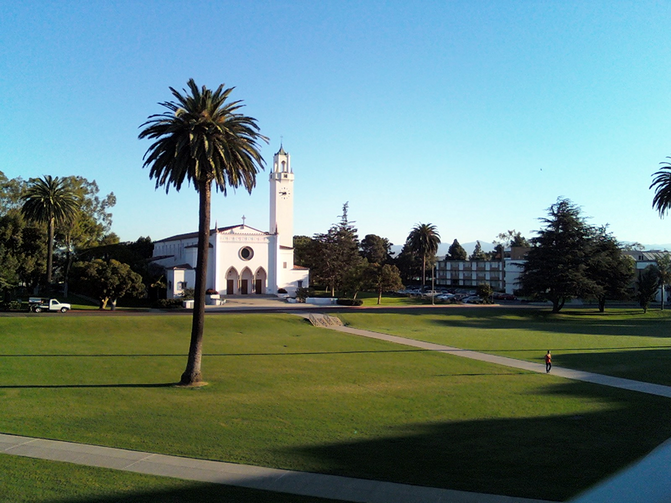 Loyola Marymount University is the site of the upcoming Democratic presidential debate (Mishigaki at English Wikipedia).

WASHINGTON (CNS) -- The Democratic presidential debate scheduled for Dec. 19 at Loyola Marymount University in Los Angeles will go on as planned now that a tentative agreement has been reached between a food service company and school employees.

The seven qualifying candidates had said they wouldn't cross a picket line to participate in the debate and they hoped the two sides would reach an agreement. Most of the candidates had announced their decision about their plans on Twitter Dec. 13.

Members of Unite Here Local 11, representing food service employees at Loyola Marymount in Los Angeles, have been in negotiations with the university's food service provider, Sodexo, since March. In a Dec. 13 statement, the union said it had been unable to reach an agreement, but on Dec. 17 they reached a tentative three-year agreement, which includes a 25% increase in compensation, a 50% drop in health care costs and increases to workers' job security.

A Dec. 17 statement issued by Loyola Marymount University said the school "values all members of our community and seeks to honor the dignity of all who learn, live, and work at the university, consistent with our values and rooted in our Catholic, Jesuit and Marymount mission. We are pleased with this outcome and glad that we were able to play a constructive role by bringing the negotiating parties together."

Angela Fisher, prep cook at Loyola Marymount University, said in a statement issued by Unite Here Local 11 that she was "thrilled that we were able to reach an agreement, and that the candidate debate can continue as scheduled. I want to thank the Democratic candidates who stood with us and the Democratic Party that helped us win," she added.

A previous statement issued by the university said it was not a party to the negotiations and had encouraged Sodexo to resolve the issues raised by Local 11. The statement said that earlier that day school officials asked Sodexo to meet with union members to work out a negotiation and a solution.

After the first 2020 democratic debate, what issues do you want to hear more about?
Our readers

"LMU is not an agent nor a joint employer of Sodexo, nor of the Sodexo employees assigned to our campus. LMU is proud to host the DNC presidential debate and is committed to ensuring that the university is a rewarding place to learn, live and work," it said.

The union's Dec. 15 statement by Susan Minato, co-president of Local 11, which represents cooks, dishwashers, cashiers and servers, thanked the candidates for their show of support for Sodexo workers "fighting for a fair contract with better wages and affordable health care." She said they hoped for continued negotiations Dec. 17 and to reach an agreement before the Dec. 19 debate.

This will be the final debate of the year; four more are scheduled for 2020.

To qualify for the debate, candidates had to reach 4% in four early state or national polls or 6% in two early state polls from Oct. 16 through Dec. 12, among other requirements. The seven candidates that qualified for the debate are: Joe Biden, Pete Buttigieg, Tom Steyer, Andrew Yang and Sens. Amy Klobuchar, Bernie Sanders and Elizabeth Warren.

A statement issued by the Democratic National Committee said its chair, Tom Perez would "absolutely not cross a picket line and would never expect our candidates to either." It also said it was working with all parties involved to find "an acceptable resolution" that will allow the debate to continue.

Initially the debate was going to be held at the University of California, Los Angeles, but the DNC changed the venue in October due to a labor dispute at that campus.

The Dec. 19 debate is scheduled to be hosted by PBS NewsHour and Politico.

Show Comments ()
Comments are automatically closed two weeks after an article's initial publication. See our comments policy for more.
Provide feedback on this article
Join the conversation: Login or create an account
Before you can comment, you need to update your profile to include your first and last name, as required in our comments policy. Then reload this page and you'll be set up for commenting. Update your profile
Advertisement
More: Election 2020