After the first 2020 democratic debate, what issues do you want to hear more about? 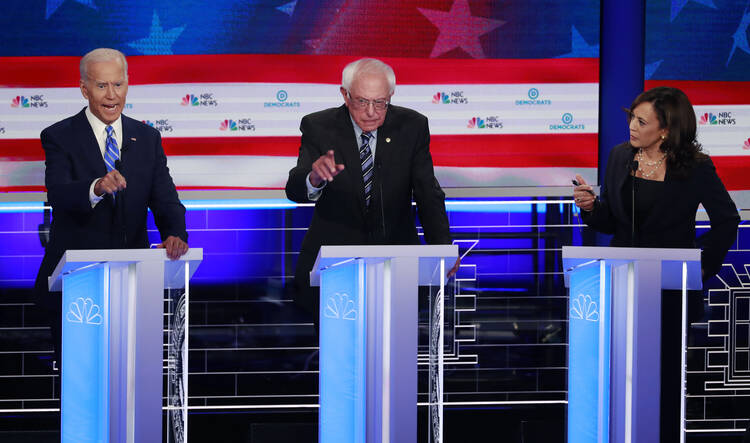 Democratic presidential hopefuls marked the official launch of the 2020 campaign in Miami, Fla., with two nights of debate, with 10 candidates participating each night. In an online survey, America asked members of its “U.S. Politics Catholic Discussion Group” on Facebook and other readers for their thoughts on the debates.

After viewing the debates, was there any issue that emerged that you wanted to examine more? Why?

Crossing the border as a civil offense instead of a criminal one. I thought I was up on the current debate, but this conversation is new to me.

Afghanistan and Iran, because of Rep. Tulsi Gabbard’s exchange with one of the other candidates about the Taliban, and her insistence that war would be disastrous.

Health care plans, student loans. Several of my children struggle with providing insurance for their families, and all have student loan debts.

Busing. I was curious why such an old issue had become such a turning point for one candidate. It appeared to me to be a largely empty “gotcha” issue.

After viewing the debates, what issue do you want to see discussed more? Why?

Immigration. It is a complex issue with no easy answers, but one where one’s faith tradition should be relevant to one’s position

I would like to hear more about the specifics of health care coverage plans from the Democratic candidates. I know what a difference it has made in our finances now that my husband and I are both on Medicare. We have been relieved both by the reduced cost of premiums and our ability to see any doctor we choose, without worrying about whether or not that person is in our network. This guaranteed coverage should be available to everyone on a voluntary basis.

It is a real shame that the D.N.C. has [thus far] declined to have a debate whose sole focus is climate change. I think there were one or two questions each night about the subject, which is wholly unacceptable.

The disconnect between social justice issues and abortion. I strongly believe that an unborn baby is a human being with human rights, and I strongly support social justice for the poor and vulnerable. I struggle with the Democratic Party position on abortion, but the Republican Party seems to ignore social justice in favor of wealth.