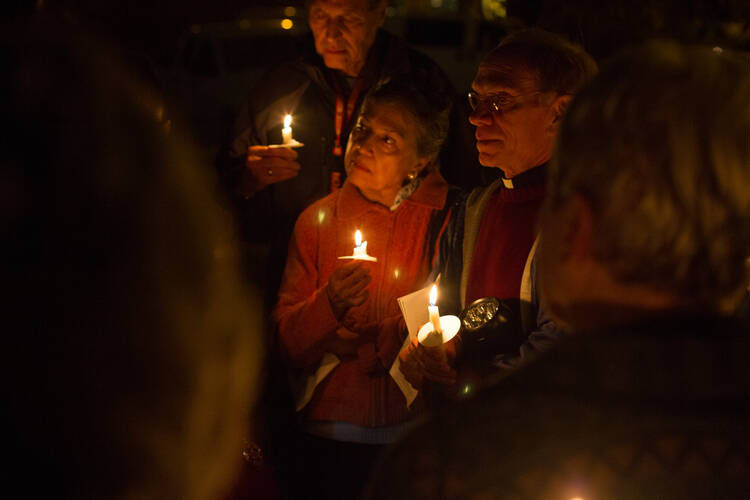 A candlelit vigil against the death penalty, held outside the Texas State Penitentiary at Huntsville on Dec. 16, 2016. (CNS photo/James Ramos, Texas Catholic Herald)

We have embarked on the season of Advent, waiting in eager anticipation for the birth of the Lord into our sinful world. With a heavy heart in a season of holy preparation, we are reminded of the U.S. government’s ongoing efforts to resume federal executions for the first time in 16 years. The first of these federal executions was scheduled for Dec. 9 but was placed on hold by a federal judge. The government is appealing the decision and intends to carry out the executions if it prevails.

As bishops of the Catholic Church, we have a moral obligation to teach the faith and uphold the dignity of human life. Through prayer, education and advocacy, we call on our government, as both Christians and as Americans, to turn back from the path of death and forgo all executions.

We call on our government, as both Christians and as Americans, to turn back from the path of death and forgo all executions.

Human dignity can be difficult to understand when we are confronted with the depths of our sins. But we believe, from Scripture and tradition, that each person is created by God in his image and likeness, and the dignity that flows from God’s creative act cannot be removed by the actions of any person, no matter how bad, no matter how hurtful. We reverence God’s gift of life in those at the beginning of life and those at its end, in the weak and in the strong, in the poor and in the rich, in the happy and in the sad, in the honored and in the forgotten. And we reverence God’s gift of life in the guilty and in the innocent.

To oppose the death penalty is not to be “soft on crime.” Rather, it is to be strong on the dignity of life.

Pope Francis has strongly emphasized that the death penalty is unacceptable and is an affront to the Gospel and to the respect for life and human dignity. When he addressed the joint meeting of the U.S. Congress during his historic apostolic visit to the United States in 2015, the pope called for the abolition of the death penalty because “every life is sacred, every human person is endowed with an inalienable dignity, and society can only benefit from the rehabilitation of those convicted of crimes.”

To oppose the death penalty is not to be “soft on crime.” Rather, it is to be strong on the dignity of life. The evidence is overwhelmingly clear that the death penalty in the United States is racially and economically biased, and it varies arbitrarily in its application based on the location of the crime. Most troubling of all, we know beyond any doubt that innocent people have been sent to death row, 166 of whom have been exonerated since 1973. As Pope Francis has written, “[t]he death penalty loses all legitimacy due to the defective selectivity of the criminal justice system and in the face of the possibility of judicial error. Human justice is imperfect, and the failure to recognize its fallibility can transform it into a source of injustice.”

The Editors: At its core, the death penalty is indefensible
The Editors

We stand for helping victims and for bringing about justice when great harm is done. And God brings justice, but he also offers mercy and grace in abundance. During Advent, we anticipate the coming of the Lord not with power and violence, but humbly and gently as a baby, a lamb, an offering. God loves us enough to die for us, to restore us to friendship, to teach us the ways of love and forgiveness, to lead us to eternal life. We ask our fellow Catholics and all people of good will to reject the death penalty, and to proclaim the Incarnate Lord’s unmeasurable gift of life. This Advent, we walk again in the darkness that seems too visible in the fear and pain of our sin, but we will catch sight of the light once more, and we will know that the darkness has not overcome it—and never will.

Archbishop Paul S. Coakley of Oklahoma City, Archbishop Wilton D. Gregory of Washington, and Bishop Frank J. Dewane of Venice have all led dioceses where executions have been carried out, and where they have previously spoken out against capital punishment.

Correction: This headline has been updated to reflect that the authors have all led dioceses where executions have been carried out, but may not lead those dioceses now. 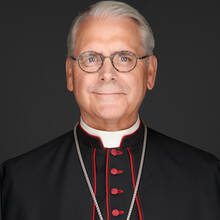 Paul S. Coakley is the archbishop of the archdiocese of Oklahoma City.

Wilton D. Gregory is the archbishop of the Archdiocese of Washington, D.C.

Frank J. Dewane is the bishop of the Diocese of Venice, Fla.