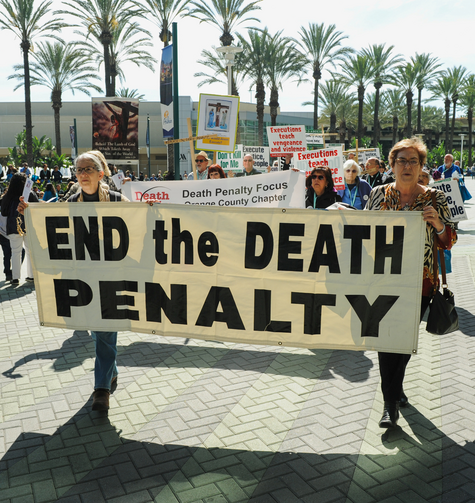 Demonstrators march to protest the death penalty during a rally organized by Catholics Against the Death Penalty-Southern California in Anaheim Feb. 25, 2017. Most Americans support life imprisonment over the death penalty, according to a Gallup poll released Nov. 24, 2019, revealing a shift in the majority opinion on this issue for the first time in 34 years. (CNS photo/Andrew Cullen, Reuters)

WASHINGTON (CNS) -- Most Americans support life imprisonment over the death penalty, according to a Gallup poll released Nov. 24, revealing a shift in the majority opinion on this issue for the first time in 34 years.

The poll, based on results from telephone interviews conducted Oct. 14-31 with a random sample of 1,526 adults in the U.S., showed 60% prefer that convicted murders receive a sentence of life imprisonment, while 36% said capital punishment would be better.

Five years ago, the American Values Survey by the Public Religion Research Institute showed that 48% of Americans preferred life without parole as the punishment for murder and 44% preferred the death penalty.

This poll revealed religious divides on the issue and showed that Catholics, Jews, members of other non-Christian religions and the religiously unaffiliated preferred life without parole as a punishment over the death penalty. Only white evangelicals (59%) and white mainline Protestants (52%) expressed majority support for the death penalty.

In an Oct. 10 roundtable discussion about the death penalty with Catholic bishops, Archbishop Paul S. Coakley of Oklahoma City said: "It's really important for our Catholic people to really dig into and learn, study, read the teachings of the magisterium of the church" on this issue.

He said with the popes -- St. John Paul II and Popes Benedict and Francis -- there has been "a steady movement toward a greater clarity in terms of the morality and the inadmissibility of the death penalty."

Show Comments ()
Comments are automatically closed two weeks after an article's initial publication. See our comments policy for more.
Provide feedback on this article
Join the conversation: Login or create an account
Before you can comment, you need to update your profile to include your first and last name, as required in our comments policy. Then reload this page and you'll be set up for commenting. Update your profile
More: Death Penalty / US Politics / US Church