Should abortion be the most important issue for Catholic voters? Here’s a better question. 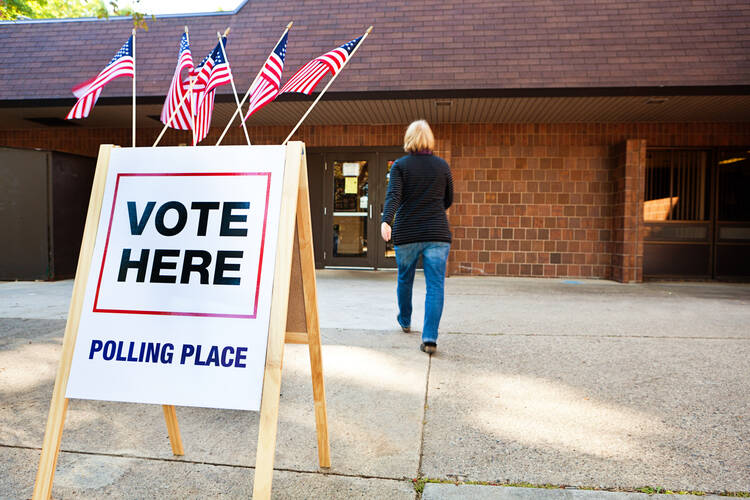 Editor's note: This piece is part of a series on abortion and politics. For other views, read "U.S. bishops said abortion should be Catholic voters’ top priority. Here’s why they’re right" and "After 50 years, the U.S. bishops’ focus on abortion has done little to change hearts and minds."

As happens routinely, especially in the run-up to a presidential election, U.S. Catholics are arguing over the intersection between politics and faith—and that means they are arguing over abortion. Most recently, we saw this debate play out as the U.S. bishops met in Baltimore and debated the language of a letter to introduce the re-issuing of their voting guide, “Forming Consciences for Faithful Citizenship.”

The bishops were arguing, essentially, over how much rhetorical emphasis to give to abortion. While it is worth unpacking how that argument proceeded, it is even more important to understand why the U.S. church remains mired in the same argument, in largely the same terms, with neither “side” making much progress. The reason Catholics are stuck in this downward spiral is because even as we debate the moral duties of faithful voters, we as a Catholic community have not succeeded in forming faithful candidates.

There are plenty of Catholic candidates in both the Democratic and Republican parties, but shockingly few, if any, with the courage to buck their party’s orthodoxy to stand up for the full range of moral claims that Catholic teaching requires. Every four years, we confront another choice about what moral evils we will ignore in order to oppose others. We—the bishops, the clergy, the Catholic media and the Catholic faithful—continue to fail to convince any significant political figure to defend both the innocent unborn and our brothers and sisters at the border. The two parties fail to uphold Catholic teaching in different ways. Democrats almost universally support access to abortion, but are at least persuadable on a range of other critical issues the church focuses on. Many Republicans are pro-life, but are significantly opposed to Catholic priorities on a number of other issues, such as immigration, climate change and care for the poor.

The church continues to fail to convince any significant political figure to defend both the innocent unborn and our brothers and sisters at the border.

Trapped in this situation, it can seem that the most important moral choice is about which evil to oppose first. That thinking seems to be what prevailed in the bishops’ meeting. Some bishops objected to the introductory letter for “Faithful Citizenship” describing abortion as the “preeminent priority” for Catholics, saying it was unrepresentative of the full Catholic tradition and specifically of Pope Francis’ magisterial teaching. To address this, they argued for including a full paragraph (No. 101) from Pope Francis’ exhortation “Gaudete et Exsultate,” which critiques the view that “the only thing that counts is one particular ethical issue or cause.” Instead, the bishops voted to include shorter quotes from the paragraph, affirming defense of the “innocent unborn” and also calling the lives of other vulnerable groups “equally sacred.”

The best way to understand this outcome is that the vote about the paragraph served as a kind of straw poll of U.S. bishops on the question of adopting Pope Francis’ rhetorical style to guide Catholics on moral and political questions. By a two-thirds majority, they declined. It is important to say that this does not at all mean they disagree with Pope Francis’ moral teaching. Every bishop agrees that the lives of the unborn, immigrants and prisoners condemned to death are equally sacred. The tension is over how to describe Catholics’ moral priorities in the political realm when one set of sacred lives has to be defended, tragically, at the apparent cost of another. Pope Francis tends to emphasize the need to keep multiple moral issues in view; the bishops chose to emphasize the ways abortion is a unique moral problem.

What did Pope Francis mean when he said the unborn and the poor are equally sacred?
Cindy Wooden - Catholic News Service

If the bishops had voted in favor of quoting the paragraph in full, I doubt it would have had much practical significance, largely because it is unclear what effect the “Faithful Citizenship” document has on how Catholics vote. The document still would have described abortion as the “preeminent priority” for Catholics, even if it also quoted Francis cautioning against single-issue focus. And we would still face the awful dilemma of all the major candidates endorsing at least one policy goal that is morally repugnant to Catholics.

The better question is whether there is anything we can do to avoid finding ourselves in this same terrible situation every four years. Continuing to argue over the moral calculus of lesser-of-two-evils problems does not help. The real problem is that any vote we cast will support a candidate who is proud of defending at least one position that is manifestly opposed to full Catholic teaching. I would take a different cue from Pope Francis than his willingness to emphasize other issues than abortion. He also calls for parrhesia, frank and bold speech. Imagine adding two paragraphs like these to introduce “Faithful Citizenship”:

Continuing to argue over the moral calculus of lesser-of-two-evils problems does not help.

Because both major political parties, and often all major candidates, take positions that reject the sacred dignity of human life and work against the common good, faithful Catholics lack an obvious political home. As “Faithful Citizenship” acknowledges, it is possible that a Catholic, while rejecting a candidate’s unacceptable positions, “may reasonably decide to vote for that candidate for other morally grave reasons” (No. 35). Such a decision requires discernment and careful prudential judgment. No Catholic should conclude that their faith absolutely compels or forbids support of a particular candidate, nor listen to those who misrepresent church teaching to claim that it does.

However, our work is not done after deciding how to vote. We also have a duty to speak up on the moral issues that the candidates we vote for would prefer to ignore, in order to call those candidates to conversion. If our best option is to vote for a candidate who supports abortion, let us be that much more zealous in speaking up for the humanity of the unborn. If our best option is to vote for a candidate whose immigration policies are unjust, let us redouble our efforts to advocate for our brothers and sisters at our border. The true test of Catholic political participation is not simply whether we can avoid evil, but whether we can help our political candidates and our fellow Americans more fully embrace the good.

@SSawyerSJ
Show Comments ()
Join the conversation: Login or create an account
Before you can comment, you need to update your profile to include your first and last name, as required in our comments policy. Then reload this page and you'll be set up for commenting. Update your profile
Show Comments ()
Comments are automatically closed two weeks after an article's initial publication. See our comments policy for more.