The Chilean church has lost its credibility. Bishop Aos is hopeful he can change that. 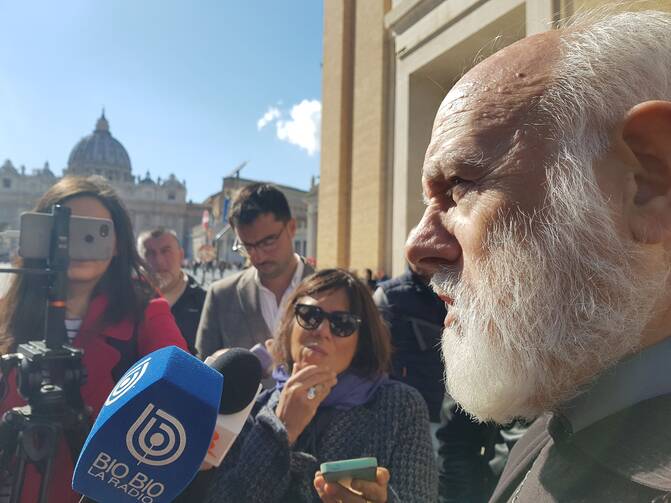 Chilean Bishop Celestino Aos Braco of Copiapo, the new apostolic administrator of the Archdiocese of Santiago, speaks to journalists outside the Vatican April 8, 2019. Bishop Aos said he met with Pope Francis April 5 to discuss the situation of the local church and the suffering that abuse survivors and all Catholics in Chile have endured following the revelations of abuse and cover-up. (CNS photo/Junno Arocho Esteves)

On March 23, Pope Francis appointed the Spanish-born Capuchin friar, Bishop Celestino Aos Braco as apostolic administrator of the archdiocese of Santiago, Chile. On the same day, he also accepted the resignation of the much-criticized Cardinal Ricardo Ezzati.

Trained as a psychologist in Spain, Bishop Aos arrived in Chile in 1983 and was surprised when Pope Francis called him four and a half years ago to be bishop of Copiapo. “I didn’t even know where Copiapo was,” he said in an interview with America on April 9. “I didn’t know what it was to live in the desert. But I said I will go there and do my service.”

He was once again surprised on the eve of his 74th birthday when the pope appointed him as the apostolic administrator in the archdiocese of Santiago, where the two former archbishops, Javier Errázuriz Ossa and Ezzati are accused of covering up the abuse of minors by priests.

Bishop Aos said that the challenge before him under such circumstances “is great, but it is beautiful.”

Bishop Aos said that the challenge before him under such circumstances “is great, but it is beautiful.” Pope Francis is having difficulty finding suitable candidates to be bishops in Chile and has already appointed no less than seven apostolic administrators as part of the process of reform and purification after the abuse scandal rocked the Chilean church. Bishop Aos sees his own appointment in this light, too, and said, “I hope there is this process of cleaning and purification, also in those dioceses where there are not interventions.”

According to various research studies, the Chilean church is today one of the most discredited of Latin America. At the time of the Pinochet dictatorship it was the most respected. People speak of a crisis of credibility in his diocese, but Bishop Aos suggests the reality is more complex.

“When we celebrated the big feast of Candlemas on Feb. 2 in Copiapo with traditional dances, etc., I thought that because of the credibility issue the numbers [attending] would have dropped,” he said, “but surprisingly this year there were more people than ever.” Indeed, he noted, “the simple people, many of them miners, said they came for Jesus Christ and the Virgin, not for the priests.” He emphasized that “there is this faith, this profound conviction that effectively the church is more than the priests. This is the reality.”

“I always knew that the church is a sinner too and that the priests are not superheroes or angels,” Bishop Aos said, but he had “never suspected that that these real monstrous crimes could have happened and for so long” in the church in Chile.

He said he knew that some priests “allow themselves to be tempted by alcohol, others don’t have clear finances or they fall into disordered sex—either because they break their vow of chastity and get into a relation with a woman or because there is homosexuality or, as in this case, they abuse minors.”

According to various research studies, the Chilean church is today one of the most discredited of Latin America.

He believes that “these priests were good willed at the beginning, but that they were corrupted later on” and asks, “What led them to be corrupted and why was there no reaction? That is what disturbs me.”

He thinks a reason for the abuse problem was the poor selection of candidates for the priesthood. “It’s clear that young boys were allowed to enter for the priesthood that never should have been let enter the seminary,” he said. “And there were consequences.”

He believes that profound purification and reform is essential in the Chilean church today. “Superficial touches are not adequate; everyone has to make this conversion of heart. We must understand clearly that this is not a task [just] of the pope, much less [just] of the apostolic administrator of Santiago, nor of the bishops. It is a task of all Christians and of the whole of society in Chile.”

Bishop Aos said, “As we enter Holy Week and I look at the good Jesus, I see that he was calumniated; they called him an agitator, a pervert, a blasphemer, that he had made a pact with Satan. How many things they said about him.

“They tortured and killed him, and it seemed that they had silenced him.” At the same time, he said, “there are others who say of this Jesus, who carried the cross, that they recognize him as savior and that the greatness of the church is that it is not simply an institution, as a company might be, but that it has a human part and a part of mystery, of salvation.”

Since taking over as administrator, Bishop Aos has impressed Chileans by his simple lifestyle and the way he reaches out to people, a manner which many see as different from his predecessors. Asked to explain this, he responded, “Each bishop has his qualities and in each historical moment society needs different styles.

“I do not seek to copy the style of Cardinal Ezzati or Errazuriz, or their predecessors. I try to imitate their virtues as far as one can, but I do not have to copy anyone.” Indeed, he said, “the pastor, the bishop has to be close to the people and for that reason does the things he does, meets people who have suffered.” He revealed that on his return to Santiago he planned to meet with victims of abuse, beginning with Juan Carlos Cruz, José Andrés Murillo and James Hamilton.

He believes that profound purification and reform is essential in the Chilean church today.

In his short time as administrator, the archbishop decided not to appeal the court verdict that awarded financial compensation to these victims of abuse, describing it as necessary step forward to try “to heal the wounds.”

Bishop Aos declared, “We are not citizens of the first [class] that are above the law and have privileges, but neither are we citizens of the third rank. We ask that the same law be applied to all. And if there’s a priest or a bishop that has committed a delict, he has to respond for his actions and accept the consequences. I hope that in that way we can advance.”

He emphasized that “Chilean society needs to review and reform itself so that whenever an abuse happens there is an alert sign.” In the past, he said, “a climate was created in the church in which all controls failed: the control of the group, of friends, of the seminary, of the bishop himself.”

He emphasized that it is important that “the bishop must be concerned for his priests.” He said that is easy in a small diocese like his former one—Copiapo, which had 20 priests—but it is more difficult in Santiago where there are 400 priests. And if one adds the deacons, women and men religious, and the permanent deacons, the number reaches about 1,000. “The bishop doesn’t need to have a network of spies but he needs to have social controls that they tell him whether something is badly functioning in a parish.”

Why is the Vatican’s process for holding bishops accountable still so opaque?
The Editors

During his week-long visit to the Vatican he met many people, including Cardinal Sean O’Malley and the archbishop of Malta, Charles Scicluna. He had an hour’s private audience with Pope Francis during which, he said, “the pope reaffirmed that we are the church….I must take care of the persons who are wounded and vulnerable, but I cannot forget that I am also the pastor of the poor, the old, couples, children, students and everyone. To have this sentiment to welcome everyone is also to arouse a spirit of collaboration.”

“I return to Santiago with great hope,” Bishop Aos said. “I spoke to the pope and I know what awaits me is difficult, but I have not lost peace, just as he has not lost peace, not even with all the problems of the world he has.”

He said his hope is grounded in the fact that God brought him to Chile: “I return with hope, and double hope, because I saw that there is the good will to help me in those I met in the Vatican congregations, and I also know that many people are praying for me. This is the great mystery that the world does not understand, and so one knows that one is not going forward alone, that one has the help of the Lord.”

Not to excuse pederasty, but curious isn't it that Francis aims his cannons at the most liberal economic regime in the Southern hemisphere (save Oz.)?

Will Nier
3 years 1 month ago

The entire Catholic Church has lost its credibility. How can it be credible when it continues to deceive people.

nice, honest, quotes that give me a sense of credibility so lacking in Braco's peers. But can only hope that Braco is not overwhelmed by the "system" which has a life of its own. So let's hope and pray that he is successful. Viva la accountabilita!

No. Not possible. How obtuse does a Church have to be, to think that decades of abuse can be magicked away and its vanished credibility restored ? It has shown, by tolerating this evil for so long, where its heart really is. And it thinks a few insincere and superficial apologies will make up for that ?