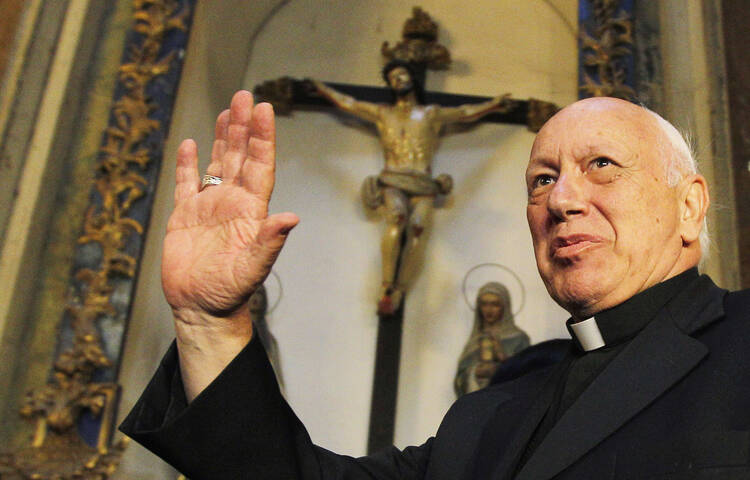 Pope Francis has accepted the resignation of Cardinal Ricardo Ezzati, the archbishop of Santiago, Chile. He is pictured in a 2013 file photo. (CNS photo/Eliseo Fernandez, Reuters)

Pope Francis has accepted the resignation of Cardinal Ricardo Ezzati, the archbishop of Santiago, Chile, the Vatican announced on March 23. He has appointed a Spanish born Capuchin friar, Bishop Celestino Aós Braco of Copiapo, as apostolic administrator of the archdiocese, the Vatican stated.

The pope’s decision came hours after the eight judges in an appeals’ court in the Chilean capital yesterday unanimously rejected the request of the cardinal’s lawyers to dismiss the charges of cover-up in cases of abuse of minors by three clerics in the archdiocese. The cases relate to the abuse of minors by the former chancellor of the archdiocese, the Rev. Oscar Muñoz; the Marist brother, Jorge Laplagne; and a former assistant in the cathedral, the Rev. Tito Rivera.

It seems that much of the evidence that had led to the cardinal’s incrimination came from documents obtained by the prosecutor, Emiliano Arias, when he ordered a raid on the archdiocesan offices last year. Last July, the cardinal opted for silence when asked to give testimony before a public prosecutor.

The appeal court not convinced by his defense, so he will now have to stand trial on these charges and answer in court in the coming months.

His lawyers, among other things, argued that some of the crimes happened between 2003 and 2009 when he was bishop of Concepciòn and had not yet come to Santiago. But the judges of the appeal court were not convinced by his defense, so he will now have to stand trial on these charges and answer in court in the coming months.

The 77-year old cardinal had already handed in his resignation twice: first on reaching the age of 75 and then last May together with the more than 30 Chilean bishops at the end of their summit meeting with Pope Francis on the situation in the country as a result of the widespread sex-abuse of minors by clergy scandal.

Pope Francis has already accepted the resignation of seven Chilean bishops, the cardinal is the eighth, and probably not the last. It is significant, however, that he has not appointed a new archbishop of Santiago to replace Cardinal Ezzati. Sources told America that the search for a suitable successor has not been easy and is not yet concluded.

Hence the pope’s decision to appoint Msgr. Aós Barco, O.F.M. Cap., who was born in the Archdiocese of Pamplona, Spain, in 1945, a man with high academic qualifications, including in canon law and psychology, as well as considerable pastoral experience, first in Spain and then in Chile where he arrived in 1983. Pope Francis appointed him as bishop of Copiapó in 2014, and today also assigned him this delicate task as apostolic administrator in Archdiocese of Santiago.

Sources told America that the search for a suitable successor has not been easy and is not yet concluded.

According to the local media, Cardinal Ezzati is one of seven bishops who now have to answer to the Chilean justice for their roles and responsibility in the abuse scandal, and some sources say he risks imprisonment if found guilty and convicted.

In addition to his problems with the country’s justice, the cardinal who was born in Italy but obtained Chilean citizenship in recent years for his significant contribution in the field of education of young people, now risks losing that citizenship if the Senate approves a law to this effect in the coming days, as seems likely. If he is deprived of Chilean citizenship, he would have to leave the country and this could further complicate the holding of the trial.

Why is the Vatican’s process for holding bishops accountable still so opaque?
The Editors

Among the cardinal’s most vocal critics is Juan Carlos Cruz, who along with fellow survivors José Andrés Murillo and James Hamilton, were invited to meet with the pope last April at the Vatican. Speaking to journalists May 2, Mr. Cruz said he told the pope how he was demonized by Cardinals Ezzati and Errazuriz in an email that was later leaked.

“They called me a ‘serpent,’ they called me everything. I told the Holy Father, and he said he was hurt, Mr. Cruz said. In a message to Catholic News Service March 23, Mr. Cruz applauded the pope’s decision to accept the cardinal’s resignation saying that “the pope knows what he is doing” and expressing hope that the pope would “find someone who will lead Santiago on the right path.”

Mr. Cruz also expressed his support of Bishop Aós in the difficult task of leading the archdiocese back “to what is true, to its source.”

Cardinals are falling like skittles in a bowling alley, as secular judicial processes reveal what these hierarchs so desperately tried to cover up. I am presently reading my copy of Frederic Martel's book "In the Closet of the Vatican: Power, Homosexuality, Hypocrisy", which finally arrived late last week. A fifth of the way through, and my jaw is hanging freely in astonishment. His meticulously researched work does much to uncover the systemic culture of mendacity that allowed these sorts of cover-ups to happen in the first place. The Catholic hierarchy has a massive gay presence ... and when closeted gay men live in fear of being found out, is it surprising that they will often cover up the crimes of others lest they might be outed as an act of revenge? Martel's magisterial body of research will serve the church well at this critical crossroads ... where some healthy introspection speedily followed by wise choices could perhaps just save the institutional church from self-obliteration. Martel has made use of a formidable team of researchers ... the list of Cardinals he has interviewed, a comprehensive list of sources, etc, etc, can be found at http://www.sodoma.fr/

Pope Francis has not pulled any punches in expounding on the hypocrisy of those cardinals and bishops who have "led a dissolute life" ... "behind their rigidity there is something hidden in a person's life. Rigidity is not a gift from God. Gentleness, yes, goodness, yes, benevolence, yes, forgiveness, yes. But rigidity, no! Behind rigidity there is always something hidden, in many cases a double life, but there is also something like an illness." ... "There are those who are rigid with the double life: they appear handsome and honest, but when no one can see them they do bad things ... they use rigidity to cover up weaknesses, sins, personality disorders ... the rigid hypocrites, the ones with the double life" ... "Like soap bubbles, [these hypocrites] hide the truth from God, from other people and from themselves, showing a face with a pious image to assume the appearance of holiness ... On the outside, they present themselves as righteous, as good: they like to be seen when they pray and when the fast, when they give alms. [But] it is all appearance and in their hearts there is nothing ... They put make-up on their souls, they live on make-up: holiness is make-up for them ... Lies do a lot of harm, hypocrisy does a lot of harm: it is a way of life."

......and it is the "secular judicial processes" that is winnowing the wheat from the chaff.