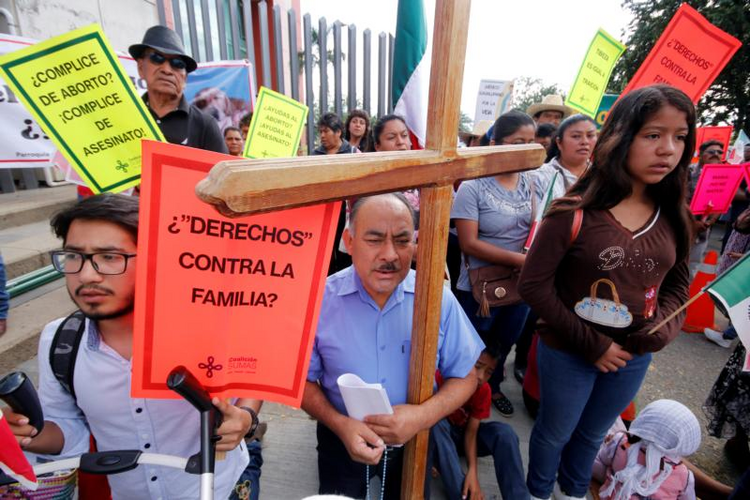 GUATEMALA CITY (CNS) — Lawmakers in the southern Mexican state of Oaxaca have approved a measure to decriminalize abortion, despite vocal church opposition.

The measure passed the Oaxaca state legislature, 24-10, amid shouts in the session from boisterous supporters and opponents. It allows for abortion in the first 12 weeks of pregnancy. Oaxaca becomes the second Mexican jurisdiction to decriminalize abortion and follows Mexico City, which approved decriminalization in 2007.

The Archdiocese of Oaxaca voiced displeasure with the decision, posting on its Facebook page immediately after the measure was approved, "Only God decides who is born and who is not born."

In a statement released later that day, Archbishop Pedro Vazquez Villalobos said, "Making laws that promote the death of the unborn causes a grave moral deterioration, continues deforming our values and does not protect the defenseless nor defend the weak."

The archbishop added, "We continue praying that this situation makes us aware of what we want and what kind of society we want to shape so that, as true Christians, we continue to be defenders and promoters of human life."

The Mexican bishops' conference expressed opposition to the proposal, saying in a Sept. 24 statement, "We reaffirm it is the obligation of the state to protect the rights of each human being, to preserve their lives, from the moment of conception until their natural death. It's not a topic of majorities or minorities."

Lawmakers from the left-leaning MORENA party advanced the abortion bill in Oaxaca.

The party, which holds power on the federal level and controls a majority of Mexico's state legislatures, has not always showed much enthusiasm for advancing controversial social issues such as abortion. President Andres Manuel Lopez Obrador, who founded MORENA and won power in 2018 with a coalition, has said other issues such as fighting corruption were more a of priority for his administration.

Still, some in Lopez Obrador's administration, including Interior Minister Olga Sanchez Cordero, have proposed creating a single criminal code for the country, which would make Mexico City's abortion law valid on the national level.

The federal government welcomed the Oaxaca measure, saying in a Sept. 25 tweet, "Our democracy is strengthened with the extension of rights and the recognition of the autonomy of women to make decisions over their own bodies."

The president of Mexico's Supreme Court also welcomed the decision.

The high court recently upheld a health secretariat norm known as NOM 046, which allows for abortion in the case of sexual assault. The ruling said no criminal complaint needed to be filed in such cases and that minors did not need to obtain the permission of their parents before getting an abortion after being raped.

Good to hear that women's rights are creeping up around the world.

What do we want and what kind of society do we want to shape? I’ll answer that. We want a society where women are not ruled by men and laws made by men. Women must control their own bodies. The church can teach doctrine, and accompany their parishioners with love and understanding. They can spend the rest of their time cleaning out their own house—the rapists and those obstructing justice for survivors.

This is a good thing - Mexico's abortion rates will likely drop after this law takes effect for a while since that is what happens everywhere in the world where abortion becomes legal, safe and affordable, especially, if these Mexican States also make access to birth control cheap and easy to obtain.

Right now South American Countries (due to their Catholic Culture) have the highest abortion rates in the world, despite their strict laws criminalizing abortion. These laws do not work!

It is time to try a different way. Help women rather than try to control them and overtake their rights to choose how they wish to use their own bodies and organs. This is justice. Our church needs to wake up to the fact that it has been teaching oppression of women for centuries both by exclusion, keeping women out of same sacraments and priesthood, and by manipulation of civil and criminal laws around the world.