Pope Francis: Life without parole is not a solution to crime 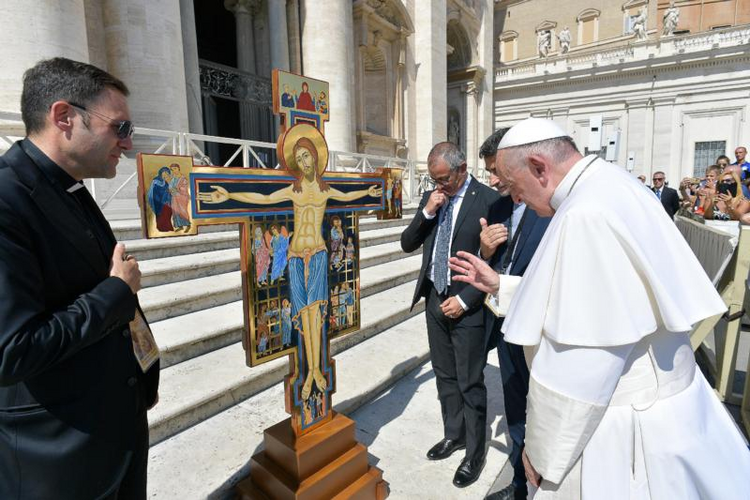 Pope Francis blesses a cross during an audience with members of the Italian Prison Police in St. Peter's Square at the Vatican Sept. 14, 2019. The pope told prison guards, chaplains and officials that life sentences in prison without the possibility of parole are not the solution but a problem to be solved. (CNS photo/Vatican Media)

VATICAN CITY (CNS) -- Sentencing someone to life in prison without the possibility of parole is "not the solution to problems, but a problem to solve," Pope Francis told Italian prison guards, prison chaplains and officials from the Ministry of Justice.

"If you close hope in a cell, there is no future for society," the pope told thousands of guards, chaplains, volunteers and their family members Sept. 14 during an audience in St. Peter's Square.

Among those present were two detainees who are serving life sentences, but are engaged in a formal process of recognizing the gravity of their crimes, making amends as far as possible and preparing to apply for parole.

While protecting its citizens, the pope said, every society also must seek ways to rehabilitate those who have committed crimes and find ways to help them make positive contributions to society.

Making someone pay for the "errors of the past" cannot mean "canceling their hope for a future," he said. In fact, everyone has "the right to hope."

Saying he wanted to address all inmates, Pope Francis said he had one word for them: "courage."

Have courage "because you are in God's heart, you are precious in his eyes and, even if you feel lost and unworthy, don't lose heart," the pope said. "You who are detainees are important to God who wants to accomplish marvels in you."

Even behind bars, he said, "never let yourselves be imprisoned in the dark cell of a heart without hope; don't give in to resignation. God is bigger than every problem and he is waiting for you in order to love you."

"Put yourselves before the crucifix, under the gaze of Jesus, before him with simplicity and sincerity," the pope told prisoners. "There, with the humble courage of one who doesn't lie to him- or herself, peace will be reborn, and trust in being loved and the strength to go on will flourish."

Pope Francis was not speaking only figuratively. During the audience, he blessed the "cross of mercy" made by detainees in the Paliano prison, which the pope visited in 2017. The tall crucifix is decorated with "biblical scenes of liberation, ransom and redemption" and will be taken on pilgrimage to prisons throughout Italy.

Speaking to prison police, prison guards and prison staff, Pope Francis publicly thanked them for their work, which is often hidden and poorly paid.

"I know that it isn't easy," the pope said, "but when, in addition to watching over security, you are a presence close to those who have fallen into the web of evil, you become builders of the future, you lay the foundations for a coexistence that is more respectful and, therefore, for a society that is safer."

If a prison sentence has the ultimate aim of preparing detainees to return to society and contribute to their community as upstanding citizens, Pope Francis said, then the guards who spend the most time with them must be models of treating others with dignity and respect.

"I thank you for not only being vigilant, but especially for safeguarding the people entrusted to you so that in recognizing the wrong they did, they will accept avenues of rebirth for the good of all," the pope told the guards.

"You are called to be bridges between the prison and civil society," he told the guards. By "exercising a correct compassion, you can overcome the mutual fears and the drama of indifference" that separate the inmates and wider society.

Unfortunately, this sounds lovely but it is also more than a bit naive.

I am married to a correction officer so I know from his experience that this concept that life without parole is always wrong is simply wrong itself, and it comes from a pope who probably was not introduced to the worst of criminals.

Jesus does not order us to let the violent prisoner go. He merely tells us to visit him/her and not imprison them and forget about them.

There are some criminals who are not capable of being non-violent with others. Some of them are suffering from emotional or mental health issues. Others are simply so ingrained within a violent culture that violence means nothing to them. You don't ever want to let out the Jeffrey Dahmers, Charles Manson's, etc. ever. There are a lot more of these kinds of criminals than many people realize. Where my husband worked there have been prisoners he overheard daily gloating and bragging over the women and children (some babies) they maliciously kidnapped, raped, tortured and murdered. Many have been let out because they weren't famous names and were back in prison within the same month but only after brutally harming or murdering another person during their short leave from prison (usually awarded by a parole board that felt confident these criminals would not re-offend).

We must treat the incarcerated humanely while in prison, yes, that is obvious but that does not mean that some of them should ever be allowed to leave prison. Quite frankly, the only thing keeping me from supporting capitol punishment, is the trust that the worst of our criminals will never brutally harm anyone else again. So no I don't think we should ever lightly keep someone in prison for life but at the same time we need to respect that some criminals are not capable of rehabilitation and others are not interested in rehabilitation.

Prisons are primarily to keep the public safe, then to rehabilitate, and to some degree punish and award justice to the victims. They are not designed to just fix a problem or be an answer to crime overall. Do we have too many non-violent criminals in jail? absolutely! and that is what needs to be fixed first and most urgently.