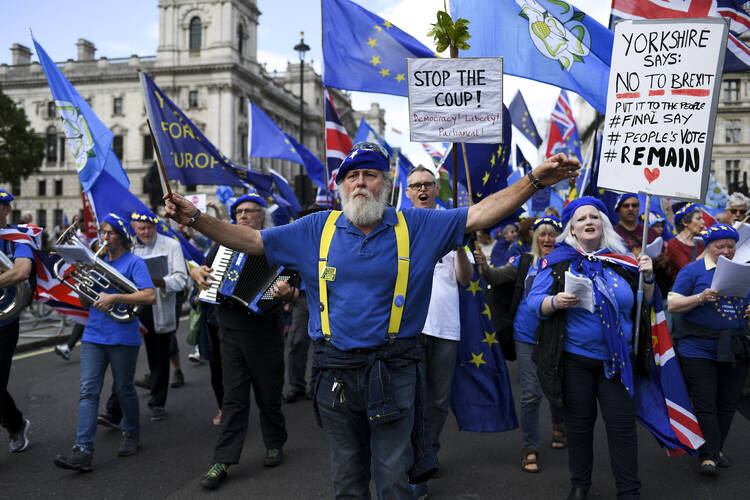 It had been rumored for some weeks: Boris Johnson, the new prime minister of Britain since becoming the leader of the Conservative Party, might be planning an attempt to suspend Parliament in order to push through a “no-deal” withdrawal from the European Union. Several leading members of his own party had scathingly declared themselves opposed to any such move. Last week the attempt actually happened, in the latest surreal act of our Brexit tragedy. But a procedural ruling on Tuesday by the speaker of the House of Commons keeps open the possibility that lawmakers will force Mr. Johnson to seek an extension to the Oct. 31 withdrawal deadline if he fails to reach an exit agreement with the European Union. Mr. Johnson’s position was further weakened on Tuesday by the defection of a Conservative M.P. to the Liberal Democratic Party, increasing the chances of a new general election this fall. (Update: Mr. Johnson lost a critical vote in the House of Commons late Tuesday afternoon and said he would seek a general election. By a vote of 328-301, M.P.s gave themselves the authority to pass legislation preventing a no-deal Brexit.)

To backtrack, last week the controversial Mr. Johnson, now able to sleep nights in 10 Downing Street without any personal electoral mandate, sent three lackeys to interrupt Queen Elizabeth II’s summer holiday at one of her castles in order to obtain the royal assent for a prorogation of Parliament. This was duly given. Widespread protests soon followed after the news broke online. With only a couple of hours’ notice, an emergency demonstration had been organized, and so I found myself in a noisy crowd of about 10,000 right outside Parliament, gridlocking rush-hour traffic along the riverside.

Maybe we did not think Mr. Johnson would have the gall to pull this stunt. But gall is a characteristic of this man.

Maybe we did not think Mr. Johnson would have the gall to pull this stunt. But gall is a characteristic of this man. Earlier in his career, he was fired from a job in journalism for making up stuff; controversial views and behaviors have accompanied his whole career. The excuse worked out by the Johnson spinners is that he leads a new government; therefore he needs a new Queen’s Speech to set out his legislative program for the new term. This is the arcane method that we have here, whereby the monarch shows up at Westminster in a horse-drawn cart in order to make a speech that has been written for her about policies of which she may or may not approve.

But few are fooled by this excuse. The man wanted to prorogue, or suspend, Parliament and ram through his hard no-deal Brexit without any further interference, as he would see it (the rest of us call it scrutiny), by elected parliamentarians. Conservative M.P.s who defy him have been warned that they will not be nominated at the next general election.

On Saturday, there was a much bigger street protest, this time outside Downing Street itself. But it was not a massive demonstration of the kind we have seen in this city. Rather than clog roads into central London, organizers opted to promote many simultaneous demonstrations across Britain’s four nations; I have found at least 80 locations. The effect was to make clear that opposition to Mr. Johnson’s attempted coup is not confined to any metropolitan elite, as some populists try to claim, but is widespread across Britain. To underline this, most of the speakers were ordinary folk in the crowd, invited on stage and handed a microphone to volunteer their view. Some more excited marchers took to likening the demonstrations to the pro-democracy protests in Hong Kong, but that was adrenaline speaking. Nonetheless, the talk was all of an affront to democracy, with frequent references to the sacrifices of previous generations whose legacy this democracy is.

Still, at least 100,000 came to central London for a protest arranged at only 48 hours’ notice. Attending this event and talking to fellow protesters, I had no doubt that this was not an anti-Brexit protest as such, but an expression of real anger at the prorogation. The chant of “Save our democracy, stop the coup” swelled across the throng every few moments, appearing also on many hastily made banners and placards. On Twitter, #stopthecoup trended all day. In an action that I never thought I would see, thousands actually marched on Buckingham Palace, annoyed that the queen had assented to Mr. Johnson’s desire. In reality, of course, she would not have been able to do otherwise, but this was a stunning sight to behold.

In an action that I never thought I would see, thousands actually marched on Buckingham Palace, annoyed that the queen had assented to Mr. Johnson’s desire.

Fast forward to Monday, and the Internet was alive with rumors that Mr. Johnson’s call for an emergency cabinet meeting would lead to a general election announcement. Not a chance. The man appeared at the portable Downing Street lectern asserting that he did not want another election, which would be the third in five years. But he knows and everyone knows that as parliamentarians return to Westminster from their summers in sun-drenched Tuscan villas, there will be an emergency debate that could lead to a vote to block the scheduled no-deal Brexit on Halloween. Later on Monday, Downing Street admitted that if that happens, the government would have to move for an election, expected to be held on Oct. 14.

Parliamentarians opposing Johnson, who include a number of Tories, have at least this much in common with the protestors outside: They are resisting the emasculation of Parliament. The marchers are protesting against the prorogation, while at least some of the M.P.s will protest by trying to seize control of Commons business using parliamentary procedure. Legal challenges will be heard in the courts, too. This has become a battle between Mr. Johnson’s administration and the Parliament—alongside the parallel battle within the Conservative Party, which is essentially where this entire mess began.

This, at last, is probably the Brexit endgame. The focus is narrowing to the likely effects of a disastrous no-deal exit from the European Union, while other outcomes and collateral damage to the whole country remain massive threats. Shortages of some food supplies, but especially medicines, could be critical within days. Fears that insulin supplies would fail have been eased by government contingency plans, but health care professionals are anxious about other medicines, like isotopes for cancer treatments that cannot be stockpiled. Heads of several supermarket chains have voiced fears about shortages. Britain’s growing season ends soon, and fresh vegetables must come from continental Europe.

Theresa May fumbles toward a no-deal Brexit
David Stewart

If there is no deal, there are no procedures at ports like Dover; lengthy delays are inevitable. And other collateral effects of crashing out without any deal have not disappeared. Polls in Scotland, where almost two-thirds of voters opposed Brexit, are surging once again toward independence, while the “backstop” at the Irish border, proposed by the British government to safeguard the Good Friday Agreement between Ireland and Northern Ireland, remains unresolved.

King Charles I had a similar idea to Mr. Johnson’s. That was over three centuries ago. Exasperated that Parliament would not approve further taxes for military campaigns, he prorogued, then managed to rule without Parliament for 11 years, beginning in 1628. Charles passionately believed in the divine right of kings; many here assert that Mr. Johnson, educated at Eton College, belongs to a privileged caste who see themselves as born to rule. Charles, defeated in the English Civil War, was executed before a large crowd in 1649, as Oliver Cromwell’s forces moved into power. Contemporary “roundheads” will not visit such retribution on Mr. Johnson, but this battered, angry and divided country will have to find a pathway to peace and reconciliation.

David Stewart must feel like he is living in a 3rd world country in Latin America. Like Trump, Boris acts like a dictator--with a posher accent. Whole affair seems like Downton Abbey on drugs. Too bad we don't have a Winston Churchill or General DeGaulle around to keep order.

For a good explanation of Brexit and the issues- http://bit.ly/2lZd2Td It is a struggle of the common people against the rule by unelected elites from other countries.

Any guesses where the sentiments of the author lie?

The people voted to leave the EU, so just leave without a deal. The EU owes UK nothing and the voters should have realized that. Now the UK sees possible consequences of leaving without a Deal, they are getting cold feet. Maybe the UK should revote the Brexit now with a better understanding of the consequences.

Mike
You have it backwards: It’s not that the UK thinks it is owed something.by the EU....it’s that the EU expects The UK to pay the EU between € 30 to 60 billion

Perhaps the good Jesuit Author could explain why a religious is attending political rallies instead of “feeding the hungry, clothing the naked, teaching others how and why they should also do so.
While he is at it perhaps he could explain whether he was FOR Scotland leaving the Union back when the vote was taken and now?