Britain staggers toward the Brexit deadline, with another separation plan in doubt 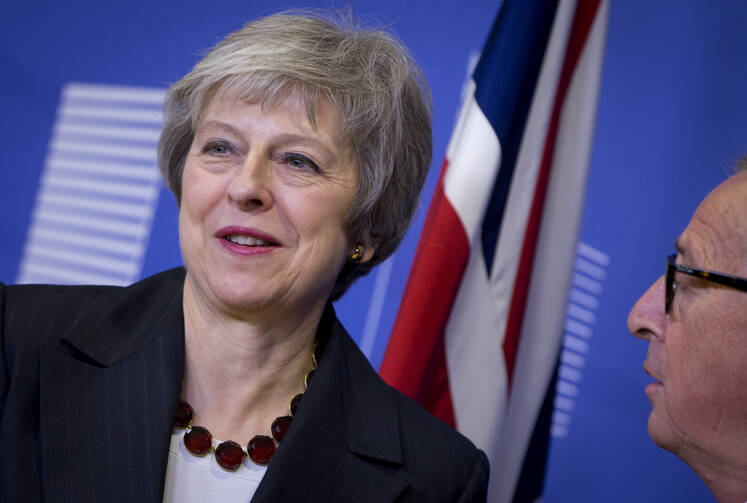 There is a danger that, sated by coverage and conversation about Brexit, and not nourished by much that sounds new for some months, some of us might miss how momentous November 2018 has been. This stuff has been going on for well over two years, heaven help us, and has rarely felt like it was going anywhere. It does not feel like the most momentous period in British history since World War II, the Suez Canal Crisis or even when William the Conqueror showed up on the south coast, but it probably is.

The news cycle has been bringing us crunch summit meetings in Brussels almost weekly. And like a Friday night post-work drunk on Westminster Bridge staggering from one lamp-post to the next on his crooked way to Waterloo Station, the London government has lurched from one near-calamity to another. When that drunk seems about to sway into the path of a red London bus, onlookers vacillate between helping him out and looking the other way. The Tory Government, haunted by the image of another red bus bearing a mendacious Brexit referendum slogan, is likewise trying to head off its own Waterloo.

The London government has lurched from one Brexit near-calamity to another.

It wasn’t exactly the 11th hour of the 11th month, because they couldn’t even get the symbolic timing right. But along came a last-minute, last-chance draft agreement for departing the European Union that, inter alia, was meant to circumvent the toxic matter of the land border between both parts of Ireland that will become, after March next year, the United Kingdom’s only land border with the European Union.

Practically the only thing that unites almost every player is the desire to maintain a frictionless, invisible border on the island of Ireland, but also to avoid any settlement that would treat the six Northern Irish counties any differently from the rest of the current United Kingdom—in this instance, through a customs border in the Irish Sea. The Unionists who prop up the Tory government in London won’t stand for this, knowing that it might nudge those six counties closer to the republic and further from the United Kingdom. But nobody knows how to make it work.

The new proposal includes a “backstop” that would keep Northern Ireland aligned with E.U. customs rules if another solution cannot be found by the end of 2020. Until then, there would be a temporary custom territory effectively keeping the entire United Kingdom in the E.U. customs union.

Practically the only thing that unites almost every player is the desire to maintain a frictionless, invisible border on the island of Ireland.

Prime Minister Theresa May has battled gamely; that’s one thing she can do. She goes into automatic mode, so noticeable that The Guardian newspaper dubbed her the “Maybot,” and the nickname has stuck. Nobody was satisfied with the new draft agreement, which runs to over 500 pages and which, for many, keeps the United Kingdom too closely tied to the European Union. Outrage flew from the lips of such as Boris Johnson, the former foreign secretary who had left the government over a previous attempt by Ms. May to reach a concord.

Some of them had even read the paper. Several resignations duly came, including that of the most recent Secretary of State for Exiting the European Union, one Dominic Raab. Having now lost two Brexit secretaries (the celebrated Wildean showstopping line about carelessness invades our minds), Prime Minister May came up with a third hapless soul for the job. He is a nice man, surely, but few had ever heard of him.

Time is running out before the deadline on Jan. 21 for Ms. May to submit an exit deal to Parliament. But we are beginning to hear serious commentary about the possibility of Brexit not happening after all. There are more calls for a second referendum, a so-called people’s vote, on the terms of any proposed deal. What might have been whispered even two months ago is now said openly: A second referendum might not be a binary choice (approving or rejecting a proposed exit deal) but could even ask if Brexit should be canceled.

Time is running out before the deadline to submit an exit deal to Parliament, but we are beginning to hear serious commentary about the possibility of Brexit not happening after all.

The standard line constantly repeated by the government is that the British people democratically voted to leave the European Union, a decision that must be respected. But it is clear that they did not vote for what might happen now or next year; anyway, those voting to leave numbered 16.7 million out of a population of around 62 million.

Ms. May, who does not like to be reminded that she was a “remainer,” metronomically repeats that line about the democratically expressed will of the people, but she has very rarely been challenged about that. The referendum process and a system of parliamentary representative governance are, philosophically, an odd fit.

Will this latest deal get through the Commons? The numbers suggest that it won’t. Those critical 10 Unionist members, with whom the Tories allied to achieve a majority in the Commons, have bared their teeth by withholding their support in votes on finance bills. Some Tories have spoken of a leadership challenge.

Scottish National Party members, pointing out the absence of even a single mention of Scotland in the document, could not imagine supporting this deal. Their Westminster and Edinburgh Parliament members alike have questioned why, if the proposed deal favorably addresses Northern Ireland’s concerns, it fails to do the same for Scotland, where almost two-thirds of voters wanted to remain in the European Union.

Meanwhile, members of Jeremy Corbyn’s Labour Party, finding difficulty in explaining their position to the public (as well as to themselves) continue to advocate respecting those 16.7 million “leave” votes while rejecting this latest deal. Yet a handful of diehard Labour “leavers” may defy their leadership when the Commons vote comes round.

What we are watching, with a growing dread gnawing at our innards, is not a staggering drunkard risking self-harm on a London bridge. We are witnessing the slow, self-imposed demise of a country that used to congratulate itself on its influence and respect, even if that were gained by dubious colonial means, but that now looks ludicrous on the world stage. There is the realistic prospect of a “no deal” Brexit, meaning that the United Kingdom would leave the European Union without agreements in place concerning imports and customs, police and security cooperation, and even air-traffic control.

Britons have heard that food distribution companies have filled every last available pallet to try to maintain supplies, and the government has not denied that police and troops are preparing for possible unrest should supplies fail. Even those 16.7 million voters did not vote for this, whatever they did vote for. It is quite bizarre that the fifth-largest economy in the world should be reduced to this. The “leavers” have diminished their country, possibly permanently, for the sake of a populist trope about taking back control.

why blame the leavers? in a democracy, the populist vote may seem out of favor with the elite, but they should not take the blame for a lack of political leadership. The people were given an opportunity to express their will, and did so. Now they are accused of "diminishing their country"--come on, maybe you were looking for a good punch line at the end of your article, but making the electorate the scapegoat simply is dishonest. Shame!

The UK voted for Brexit, by 53% to 47%. Wales also voted for Brexit, with Leave getting 52% of the vote and Remain 48%. Scotland and the Northern Ireland Republic both backed staying in Europe. Scotland backed Remain by 62% to 40%. Brexit should separation would be a huge drawback to their party. Source: Dubai Writing services

Short summary of modern history - disguised as economical common sense, the British were invited to join a common market with a number of Western European countries.
After that, little by little like the frog in the kettle, the EEC became the EU with emphasis on all us European together making a jolly big family and before long the legal and economic systems were being decided centrally and dictated to all members.
The clandestine intention of using the creation of a united states of Europe as just another step in one world government has only become obvious since some member states began to think about leaving it. Greece preceded UK.
The reason UK is having so much uproar, fuelled by media propaganda, about leaving the EU is worthy of reflection.
The PM of the UK is being attacked mercilessly by the one world government plot just like the Tower of Babel scheme.
In my estimation, the British united kingdom developed the mother of Parliaments as a model and a gift to the world. Just now, self-government has almost disappeared by being overridden by streams of legislation over-riding local law and custom and regulation.

There is no price too high to pay for the UK to salvage democratic self-government and dominion over its territories and borders.

Any deal Brexit or no-deal Brexit is infinitely preferable to no exit.