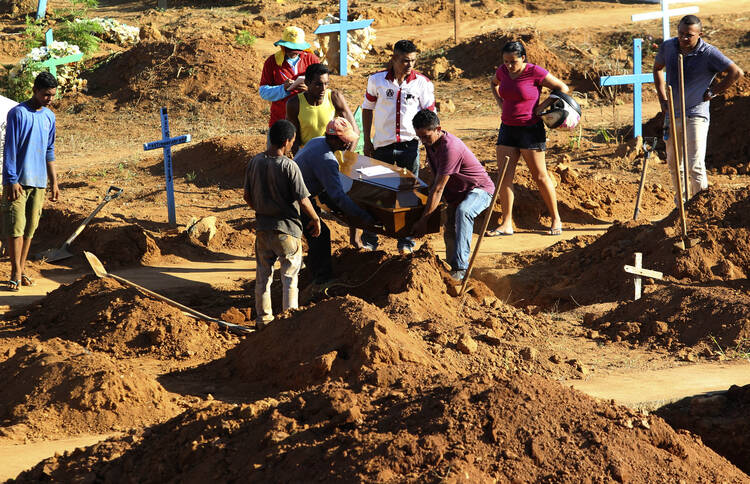 People bury a prisoner who was killed during a prison riot in Altamaria, Brazil, on July 31. Grieving families began to arrive that day at the cemetery of Altamira to mourn some of the 58 inmates killed by a rival gang in a grisly prison riot. (AP Photo/Raimundo Pacco)

With at least six big riots in Brazilian correctional facilities in the last two years, the country’s prison system—the third biggest in the world, behind only the United States and China—is a cauldron of violence and misery always threatening to boil over. The most recent occurrence, on July 29, left at least 62 detainees dead in the city of Altamira in northern Brazil; 16 of them were beheaded. In order to deal with such a barbaric system, The Prison Pastoral, a commission of the National Conference of Bishops of Brazil, has had to become more than a spiritual assistance provider. It has also assumed the role of an advocacy group for the rights of prisoners, a particularly unpopular role in Brazil under President Jair Bolsonaro.

In June 2016 (the last time the authorities released data), there were more than 720,000 inmates and the capacity for only 368,000 in the Brazilian prison system. In states like Amazonas, there are almost five times as many inmates as there are accommodations. But while overcrowding is the most visible problem, it is not the only one.

“Basically, no human right is properly guaranteed for detainees in Brazil.”

“Basically, no human right is properly guaranteed for detainees in Brazil,” said Monique Cruz, a researcher at the nongovernmental organization Justiça Global. Insufficient food and health care, a lack of water and impeded access to legal assistance are among the most common violations cited by Ms. Cruz, along with reports of widespread torture by prison staff. The right to practice religion in prison, secured by the Constitution, is reportedly violated as well.

“In the last few years, more and more restrictions began to be applied to the religious activities in prisons. But it’s worse for The Prison Pastoral because it’s the only group that denounces the terrible conditions of the system,” German-born Sister Petra Pfaller, the national coordinator of The Prison Pastoral, told America.

In correctional facilities all over the country, priests, women religious and lay Catholics of The Prison Pastoral are often not allowed to visit inmates, supposedly because of a lack of safety. “After the Compaj massacre in 2017, we weren’t allowed to enter it for eight months,” said Maria Nazaré Saraiva Alcântara, the coordinator of The Prison Pastoral in the Archdiocese of Manaus. In 2017, a riot at the Compaj prison in the city of Manaus left 56 inmates dead. This past May, another 15 detainees were killed there, along with dozens of others in other institutions in Manaus.

Priests, women religious and lay Catholics of The Prison Pastoral are often not allowed to visit inmates, supposedly because of a lack of safety.

The Prison Pastoral also has to deal with a lack of cooperation by prison staff belonging to evangelical churches and by the criminal gangs that rule daily life in prisons. The gangs are also dominated by evangelicals, said Ms. Alcântara.

Amid so much violence, there is no lack of prayers in prisons, said the Rev. Valdir Silveira, a former national coordinator of The Prison Pastoral. “Religion and sex are both forms of survival in the system. Even the most violent crime organizations are religious. But it’s a form of religiousness that reaffirms obedience,” he said. This does not help the inmates to think about their rights. “If you suffer any violence,” the thinking goes, it must be “because you’re wrong.”

The Prison Pastoral struggles not only to celebrate Mass and minister sacraments to the inmates—something that is gradually becoming more difficult—but also to instruct them about their legal rights. “To teach about laws is a way to give the prisoners the tools they can use to fight for their dignity,” said Father Silveira.

The group also tries to support the families of detainees, who frequently do not have the means to pay for a lawyer and who struggle to provide food and hygiene products to their jailed relatives, according to Sister Pfaller.

But another major concern of The Prison Pastoral is the complicity of Brazilian society in the inhumanity of the country’s correctional system. Patrick Brennan, S.V.D., an Irish-born Verbite who works with The Prison Pastoral in Altamira, remembered how a few fire tragedies caused widespread grief in Brazil in recent years and led to a call for new safety regulations—but not in prisons. In the riot of July 29, two inmates reportedly set fire to a cell block housing members of a rival faction, causing dozens of deaths.

In the riot of July 29, two inmates reportedly set fire to a cell block housing members of a rival faction, causing dozens of deaths.

“We hear people celebrating,” said Father Brennan, that there are fewer criminals now because of the riot and fire. “New massacres can occur anytime because all those deaths are rapidly forgotten and no measure is taken to solve the problems.”

Sister Pfaller explained that the prison system reproduces the enormous inequality of Brazilian society, selectively punishing young, black and poor people. “It’s a highly perverse system, and I think in the short term it will get even worse. The federal government and the states don’t have any proposal to improve the situation,” she said.

Indeed, President Bolsonaro was elected in 2018 with a platform of “zero tolerance” against criminals, a stance successfully imitated by state governors who won elections with his support. “Imprisonment is the first choice of the Brazilian system,” said Ms. Cruz. “Today, 42 percent of all detainees weren’t convicted yet. I think the terrible conditions now existing will get even worse in the near future.”

Brazil’s Prison Pastoral, pointed out Father Silveira, is one of the few organizations of its kind in the world that is not formed by chaplains who work for the state. “That’s why it’s able to do a prophetic work,” he said.

But compared to other pastoral groups in Brazil, it gets much less in donations. “Most of us are volunteers. We receive support from a few bishops, but it’s a poor pastoral. It would be easier to get funds if we worked with children or elderly people,” said Sister Pfaller.

The current mood in Brazil, even among some faithful Catholics, is not favorable to such a cause. “How will we respond when future generations ask us why we let so many people die in prisons? Things can’t keep going like this,” said Sister Pfaller.

I believe the Catholic Church has been in Brazil for awhile. Maybe there is a cause and effect between this and how the country has been governed. This is mainly an attempt to equate the current president with the turmoil that preceded him. No mention of Lula or his associates only the conservative Bolsonaro.

I continually equate poverty and violence with Catholic countries. For about 1500 years the Church promulgated a doctrine called “The Great Chain of Being.” It advocated a strict class system that oppressed about 98% of the people. This doctrine came to Latin America with Spanish/ Portuguese colonization. The remnants remain in much of Latin America and is the cause of its violence and backwardness. The Church continually ignores the one philosophy that created the modern world, freedom. It arose in Protestant England/Holland.

One exception was Argentina. A little over a hundred years ago with its incredibly rich farm lands it was as economically developed as the United States. But then it chose socialism and for the next century economic development essentially stopped in Argentina.

Yours is a poorly constructed theory for violence and poverty. How to explain the great violence, poverty and bloodshed of pre-Columbian cultures? Maya, Aztec, Inca culture were inundated with war, bloodshed, and mass starvation of the masses. What about cultures that are poor. violent and warlike in which the Catholic Church is largely absent? Syria, Iraq, Iran, Afghanistan, much Muslim Africa? And, lastly, what about places like China, Russia, and NK which routinely enslave and imprison citizens without due process and trial? Finally what about those nations with large amounts of Catholics that are mostly peaceful and have the rule of law? Ireland, Poland, Italy, France, Canada, Australia, NZ, Austria, Hungary, etc.

i should have been clearer. The only thing that led to the modern world was that freedom emerged in a couple small places in England and Holland. Just over 200 years ago about 98 percent of the world was oppressed not just Catholic Europe. The rest of the world was a very harsh place, maybe even harsher The point I am making is the Catholic Church was not making a difference anywhere it went and established social policy. The concept of freedom spread gradually to Western Europe after seeing the success of England. So by pointing to a few European countries and British colonies, you are making my point. The rest of the world mostly followed suit but not for awhile.

The best example of what I am saying is that Pennsylvania was called the poor man's nation after it was established in the late 1600's. All were treated as equals, even the poorest. By 1750 Philadelphia was the most vibrant city in the Western world and second largest in the British empire after London. Penn invited poor Germans to come and live in Pennsylvania and by 1800 about 80,000 came and a large percentage became prosperous.