Who gets to be Brazil’s patron of education under Bolsonaro? Paulo Freire or a Jesuit saint? 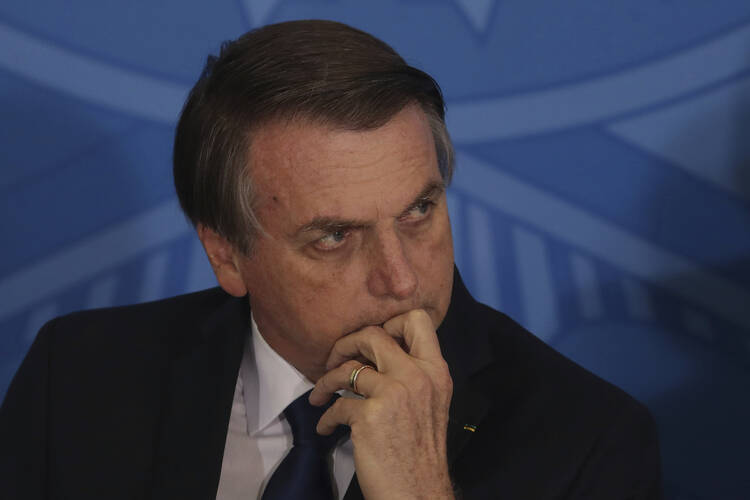 Brazil's President Jair Bolsonaro attends a ceremony on May 30 at the Planalto Presidential Palace, in Brasilia, Brazil. (AP Photo/Eraldo Peres)

One of the most-cited authors in the field of social sciences in the world, the education theorist Paulo Freire was honored in 2012 as the patron of education in Brazil. Now one of the allies of far-right President Jair Bolsonaro in the Brazilian Congress wants to strip Freire—who died in 1997—of the title. He has proposed that it be given instead to Saint Joseph of Anchieta, a Spanish-born missionary of the 16th century. But he did not count on one thing: the opposition of the rectors of the Sanctuary of Anchieta.

Amid economic stagnation and political uncertainty in Brazil, Mr. Bolsonaro’s administration has been cutting back on public spending and now seeks to make big changes to Brazil’s social security system, including higher contributions and raising the minimum retirement age. But his ideological war against the Brazilian left has not been neglected, with continuous attacks on public figures and institutions he and his supporters link to “cultural Marxism” and to the center-left Workers’ Party, which ruled the country between 2003 and 2016.

On May 21, Congress member Carlos Jordy, from Mr. Bolsonaro’s P.S.L. (in Portuguese: Partido Social Liberal) introduced a bill that proposes to transfer the title from Mr. Freire—famous for, among other works, his book Pedagogy of the Oppressed—to Saint Joseph of Anchieta. In his proposal, Mr. Jordy says that the move is justified by the “calamity of the national education.”

Amid economic stagnation and political uncertainty in Brazil, Mr. Bolsonaro’s ideological war against the Brazilian left has not been neglected.”

“Since the introduction of the social-constructivist method in Brazil, according to the line [of thought] of Lev Vygotsky, of Jean Piaget and headed by Paulo Freire in Brazil [sic], the decline of education was apparent. All those social engineers materialize what is called cultural Marxism,” Mr. Jordy’s proposal reads. The bill has yet to be approved in Congress.

After the bill’s introduction, Nilson Marostica, S.J., and Bruno Franguelli, S.J., rector and vice rector of the National Sanctuary of Saint Joseph of Anchieta in Brazil’s southeastern state of Espirito Santo, started to receive messages from parishioners asking for their endorsement to online petitions in favor of the proposal.

“Most of our parishioners didn’t realize what was going on,” Father Marostica told America. “If the idea was only to transform Saint Joseph of Anchieta into the patron of education in Brazil, that would be O.K. But what they really want to do is to oppose him to Paulo Freire and that we don’t accept. He can’t be used as a political instrument.”

The rectors released a statement to parishioners, which went viral in Brazil. In it, the Jesuits stress that they recognize the “great importance of Paulo Freire’s legacy” and that both he and Saint Joseph chose the side of marginalized people.

“Anchieta, using the language and the methods of his time, also was a ‘pedagogue of the oppressed,’ when he made the option of being with the indigenous peoples, educating them, defending them and protecting them from the ambition of the powerful ones,” the statement says. Saint Joseph of Anchieta, a Jesuit missionary, continuously denounced the violence of the Portuguese colonizers against the indigenous peoples in Brazil and opposed their enslavement. He and his fellow missionaries founded a school for the indigenous peoples in 1554, which was the origin of the city of São Paulo, Brazil’s most populous.

Ricardo da Costa is a medieval scholar at the Federal University of Espírito Santo in Vitória and an advisor at the Ministry of Education. He described the letter issued by the Sanctuary of Anchieta as “stupefying, but not surprising.”

“Internationally, the Catholic Church has been much influenced by the left. In Brazil it was the basis of Liberation Theology and welcomed former president Lula da Silva’s political movement when the Workers’ Party was created.”

Mr. Costa in June posted an article on Facebook criticizing Freire’s educational theories. “In my humble opinion, he was the basis of the educational decadency in Brazil,” he said. “The foundation of his thought is the welcoming of the cultural context of the student at school, as if it were equally valid to the teacher’s knowledge.” The result, according to Mr. Costa, is emotions are emphasized over educational content.

“The Catholic tradition teaches the exact opposite,” he said. If a student does not comply with his or her obligations in the traditional Catholic educational model, he or she should be held responsible for it, he said. “With the victory of Freire’s model,” he said, “the parents of a student with poor grades go to the school in order to question the teachers.” This situation, he argued, degrades a sense of right and wrong.

“Anchieta also was a ‘pedagogue of the oppressed,’ when he made the option of being with the indigenous peoples, educating them, defending them and protecting them from the ambition of the powerful ones.”

Father Marostica said he received 400 messages critical of the statement. Many correspondents accused them of heresy and of not being “true Catholics.”

“But we have been supported by thousands and thousands of people from all over the country,” he said.

One of the supporters was Paulo Roberto Padilha, director of the Instituto Paulo Freire, a nongovernmental organization that promotes Freire’s legacy and advocates for the “emancipated” education system he proposed. “We were positively surprised when we first knew about their statement. Someone wanted to oppose the church to Freire’s cause, but the Sanctuary of Anchieta acted in a wise way and pointed not to their differences, but to their similarities,” said Mr. Padilha. “This bill is one of the tools the government is using to distract the people from what really matters: the dismantling of public services, including the public school [system], in Brazil.”

According to Mr. Padilha, attacks on Paulo Freire’s ideas have been frequent since the military coup of 1964, when he had to flee the country for 16 years. “When they attack him, they are really attacking education and democracy, the two things that he always stood for,” said Mr. Padilha. From the 1940s through the 1960s, Freire developed a revolutionary method to teach people to read, based on valuing the students’ experiences and existing knowledge, so that students become agents in their own learning process. After the coup, he continued to work with poor people in Latin America, Africa and Europe and published several books on his experiences and reflections, proposing an original philosophy of education.

Freire was a Christian thinker and his ideas were influential on the Liberation Theology movement, particularly during the 1970s. The Brazilian right has been blaming Freire for Brazil’s poor results in international education rankings. In 2015, the O.E.C.D.’s Program for International Student Assessment showed that the average performance of students in Brazil was significantly below the O.E.C.D. average in science, reading and mathematics. But Mr. Padilha stressed that Freire’s ideas were not really assimilated in the country.

“Freire’s thought never composed the official curriculum. He advocated for community participation in the schools, and most administrations don’t want that to happen. Even in the universities, his works were not much disseminated,” he said. Most of Freire’s critics, therefore, do not really know his work and only remember he was a member of the Workers’ Party and worked as the municipal secretary of education in São Paulo at the end of the 1980s.

Ironically, Father Marostica thinks the same is true regarding Saint Joseph of Anchieta. “These people don’t know anything about him, about his greatness, about his virtues and about the fact that he stood for the indigenous peoples in Brazil,” he said. “They don’t know Anchieta and they don’t know Paulo Freire. All they want to do is to attack the Workers’ Party—and for that end they are using even religion.”

Why not de LaSalle? He dedicated his life to teaching.

They are correct in getting rid of Freire. His ideas lead to chaos and poverty which has characterized so much of Church history.

Wrong continent / country, dude (not surprising coming from you, Cos). Saint Jean-Baptiste de La Salle was French; not Brazilian. BTW, there are many Lasallian parochial schools in Brazil and they, like the Anchieta fathers in the article, recognize the great importance of Freire's legacy, and utilize much of his pedagogy. Read the Five Core Lasallian Principles....sounds a lot like Paulo Freire's values, don't they? Duh!

I am a graduate of a Christian Brothers School and have been to Rheims and have been to all 7 continents so I know the difference. The five core points have nothing to do with economics and political activity and more to do with personal action. It is involvement in politics especially dysfunctional politics that has helped lead to the decline of the Church. I still recommend Jean de Baptiste de La Salle who is nothing like Freire. He is the patron saint of teachers. It is a joke to compare the two and say they are similar. Duh!

These Jesuits would do well to remember thenwords of Saint Francis Xavier ."GIVE ME SOULS.TAKE ALL ELSE." They are too much involved in the politics of this world. God forgive them.