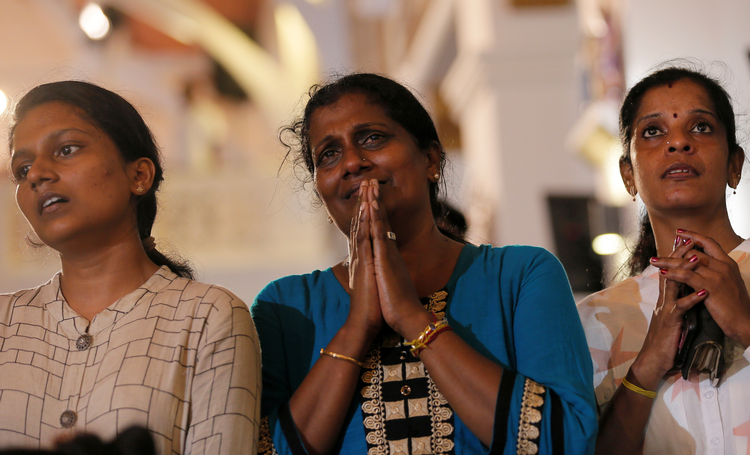 Family members of victims react while praying during the reopening ceremony of St. Anthony's Shrine in Colombo, Sri Lanka, June 12, 2019, months after it was closed because of an Easter bombing. (CNS photo/Dinuka Liyanawatte, Reuters)

COLOMBO, Sri Lanka (AP) — A top leader of the Roman Catholic Church in Sri Lanka on Wednesday called for an independent and transparent commission to investigate the Easter Sunday attack that killed 263 people, saying justice has not yet been served to the victims.

Cardinal Malcolm Ranjith, the archbishop of Colombo, said on July 31 that he has no faith in the investigations to date—one by a commission and one by a committee—into the April 23 attack.

"So far, steps have not been taken to appoint a commission comprising independent people to conduct a proper probe on the attack, to bring those responsible before the law and punish them," he told the reporters.

He criticized both the government and opposition leaders, saying they have failed to fulfill their responsibilities. "What we expected from them was to join together to probe the background of this incident and unanimously take appropriate measures. Instead they were divided into political parties and tried to suppress the truth," he said.

President Maithripala Sirisena has said he had been kept in the dark on intelligence about the planned attacks and vowed to "take stern action" against officials who failed to share it. He later appointed presidential commission to probe the attack.

Following the attack, national police chief Pujith Jayasundara was suspended and former Defense Secretary Hemasiri Fernando resigned. Both were later arrested after the presidential commission found grounds to charge them with dereliction of duties and criminal negligence. They were later released on bail.

The same commission has recommended taking criminal and disciplinary action against nine senior police officers for "lapses" in preventing and minimizing the attack.

Separately, a parliamentary committee is looking into intelligence failures despite objections by Sirisena after some officials hinted at shortcomings by the president, who is also the defense minister and minister of police.

On Wednesday, Ranjith said although people who were responsible for the attack and also those who ignored intelligence information have been arrested, it seemed some have been released without proper investigation and due punishment.

"It seems justice has not been served," he said

He urged a "transparent commission comprising independent persons in the correct manner acceptable to all and reveal the whole truth regarding this attack to the public" while the requesting president, prime minister and opposition leaders work together.

Government spokesman Sudarshana Gunawardena declined immediate comment and there was no immediate response from the president's office.

At a separate government function on Wednesday, Prime Minister Ranil Wickremesinghe said everyone involved in the attack is in police custody. He said about 200 people are being detained and police are continuing their investigation.