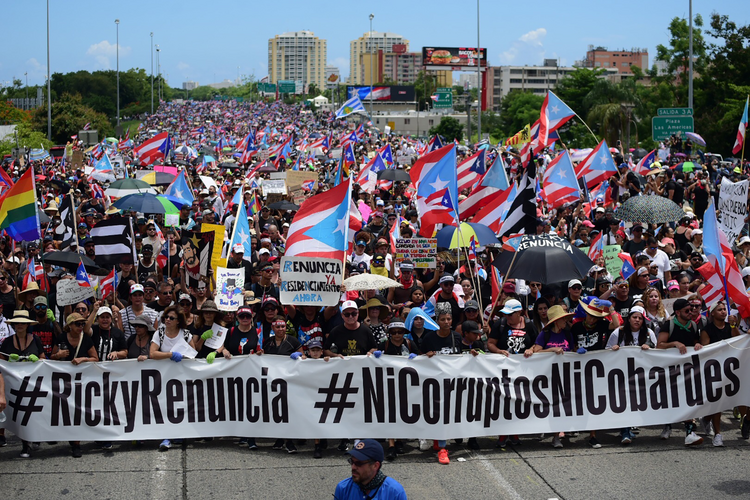 Thousands of Puerto Ricans joined one of the biggest protests ever seen in the U.S. territory, with irate islanders pledging to drive Gov. Ricardo Rossello from office, in San Juan, Puerto Rico on July 22. (AP Photo/Carlos Giusti)

Waving flags, chanting and banging pots and pans, tens of thousands of Puerto Ricans filled a central highway out of San Juan, the territory’s capital city, on July 22 to demand the resignation of Gov. Ricardo Rosselló in what appeared to be the biggest protest on the island in nearly two decades. The demonstration came 10 days after the leak of 889 pages of obscenity-laced online chats between Mr. Rosselló and some of his close advisers, dubbed the “Ricky Leaks” scandal.

Just days before this latest demonstration, the Catholic bishops of Puerto Rico joined other civil society actors who have been calling for the governor’s resignation.

“There are two principles of democratic governance, which were torn apart by the governor and his collaborators,” the bishops said in a statement sent to Fides News Agency on July 19. “First of all, the fundamental right to respect and protect human dignity were abused. Secondly, the governor took advantage of his position, which must be a sacred space of government before a people who elected him by democratic vote. You, Mr. Governor, bribed and attacked people and groups that participate in our democratic coexistence and therefore cannot continue to exercise your role.”

The bishops said in a statement on July 19: “You, Mr. Governor, bribed and attacked people and groups that participate in our democratic coexistence and therefore cannot continue to exercise your role.”

In a separate message the conference called for a day of prayer on July 26 to unite the people of Puerto Rico in prayer for relief from the mounting social, economic and governance crises they have been facing.

In the leaked chats and text messages that provoked a weary public in Puerto Rico, Mr. Rosselló and his associates insulted women and mocked constituents, including victims of Hurricane Maria. The leak intensified long-smoldering anger in the U.S. territory over persistent corruption and mismanagement by the island’s two main political parties, a severe debt crisis, a weak economy and a slow recovery from Maria, which devastated Puerto Rico in September 2017.

“The people have awakened after so much outrage,” said the 69-year-old retired nurse Benedicta Villegas. “There are still people without roofs and highways without lights.”

Jannice Rivera, a 43-year-old mechanical engineer who lives in Houston but was born and raised in Puerto Rico and flew in to join the protest, said: “This is just the beginning. Finally, the government’s mask has fallen.”

The bishops’ statement was signed by Bishop Rubén González of Ponce, the president of the Puerto Rican bishops’ conference. The text was also signed Archbishop Roberto González Nieves of San Juan, the vice president of the conference; Bishop Álvaro Corrada del Río of Mayagüez and Bishop Eusebio Ramos Morales of Caguas.

Mr. Rosselló, a Democrat, announced on July 21 that he would not step down, but he sought to calm the unrest by promising not to seek re-election in 2020 or continue as head of his pro-statehood political party. That only further angered critics, who have mounted street demonstrations for more than a week. The territory’s largest newspaper, El Nuevo Día, added to the pressure with the front-page headline “Governor, it’s time to listen to the people: You have to resign.”

The demonstration on July 21 represented the 10th consecutive day of protests, and more are being called for later in the week. The island’s largest mall, Plaza de las Américas, closed ahead of the protest, as did dozens of other businesses. The upheaval also prompted at least four cruise ships to cancel visits to Puerto Rico. Many officials worry about the effect a resignation would have on the already fragile economy.

Puerto Rico is struggling to restructure part of its $70 billion in debt under federal supervision and deal with a 13-year recession through school closings, cutbacks in infrastructure maintenance and other austerity measures.

The island is also trying to rebuild from Hurricane Maria, which caused more than $100 billion in damage, threw Puerto Rico into a year-long blackout and left thousands dead, most of them succumbing during the sweltering aftermath of the storm. Foot dragging in Washington and San Juan amid charges of inefficiency, corruption and waste has meant that much of the $42 billion in federal assistance allocated to Puerto Rico has not been disbursed almost two years after the storm. Even emergency food assistance is not expected to reach the public until September as finger-pointing continues.

Trump was right all along.