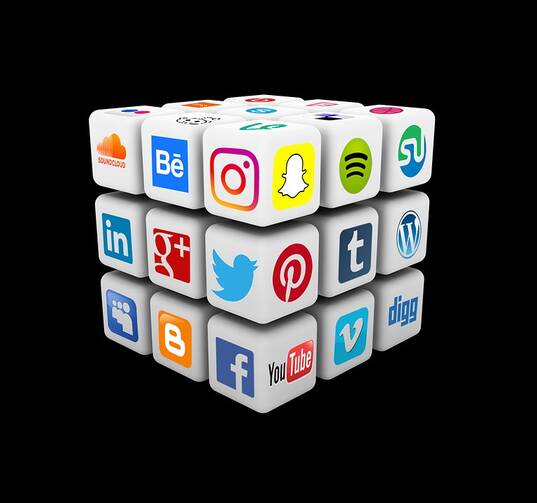 “What is received,” wrote St. Thomas Aquinas, “is received according to the mode of the receiver.” Perhaps that is obvious, but if not, what Aquinas is saying is that what we see and how we see it depend, in large part, on where we are standing. This has always been true of human beings. Creatures, as opposed to the creator, necessarily suffer from a certain epistemological myopia.

There is a lot that we do not know, and this causes us not a little anxiety. To manage that anxiety, we make use of concepts, ideas that form a kind of internal map of reality. When we encounter new terrain—the data of experience—we then survey that terrain using our internal map.

New technologies are a conduit for evangelization
Matt Malone, S.J.

History in the making at America Magazine
Matt Malone, S.J.

All of that is good and necessary. The challenge comes when we human beings mistake the concept of a thing for the thing; when we confuse our map, a symbol of the terrain, for the terrain itself. Ironically, this then closes us off to reality and limits our intellectual horizons. It makes the world smaller, which, in turn, winds up making us more anxious. We then manage that anxiety by insisting on the primacy of our concepts. Human beings do this all the time, until something occurs that breaks the cycle, some event that disrupts the mode of the receiver. Believers often refer to this disruption as grace, and Peter Lucier eloquently describes a moment like this in this issue (Page 36).

All of this is part and parcel of being human and has been with us from the first moment of our consciousness. The challenge for us today is that the way we receive information and the sheer volume of that information have expanded exponentially, which, in turn, has exacerbated the challenge of interpreting that information, dramatically increased our anxiety and revealed anew the deficiencies of our traditional means of coping with it. One result is the ideological partisanship we see in our secular politics.

As I have previously noted in this column, the use of social media as a news source has reinforced our worst habits. According to a Princeton University study, while it is virtually impossible to avoid encountering some contrary ideological views in social media, “those with the most consistent ideological views on the left and right”—that is, those most active in public discourse—“have information streams that are distinct from those of individuals with more mixed political views—and very distinct from each other.”

Social media, in other words, often deepens existing ideological and partisan divisions by reinforcing only those viewpoints with which we are already most inclined to agree.

In order to manage the anxiety caused by the epistemological onslaught of social media and cable news, we fall back on the false security of our concepts, our ideologies, those ideas that we equate strictly with reality. This, as I just wrote, is a natural human tendency; but left unchecked and taken to its extremes, this tendency becomes a destructive force.

As the late political theorist Kenneth Minogue once observed, “although ideology must take on political trappings in order to transform the world, its real character is entirely antithetical to the practice of politics. Ideology is to reality...as the reports of battles are to the concrete experience of individuals in the field. In ideological moods, we think we see in social and political life those clear lines from the history books depicting the battle order of the antagonists in massed array. They have neat, clear names like bourgeois and proletarian, colonialist and national, city-dweller and producer, in a word, oppressor and oppressed. The actual reality, however, is messy.”

Indeed it is. Messy, that is. But don’t misunderstand me. I am a Thomist. I believe that the world is intelligible and that I am a knowing subject. But I also know that there is a difference between knowing that the world is understandable and then growing in that understanding and, on the other hand, believing that I understand the world in some absolute and final way. The former is a necessary presupposition for democracy, while the latter is a justification for authoritarianisms of one sort or another.

The solution to this problem is not obvious. But for Christians, at least, grace is an indispensable component. Grace has a way of scandalizing our ideologies, our cherished myths. It tends to break down in order to build up.

As the editors conclude in this issue’s editorial, “People acting in good faith will arrive at different answers. But for Christians, love, not fear, should guide the path forward.” Love, in other words, is our map of reality.

And America, the magazine, is also guilty of this. Survey's show that liberals and conservatives have different news/information sources. This is clear by the opinions expressed in the articles published in America. It is obvious the authors do not read widely.

As Lizzy Bennet says to Darcy in Pride and Prejudice, "I hear such different accounts of you as to puzzle me exceedingly." Her prejudice led her to judge wrongly. We have an obligation to seek out so as not to judge wrongly.

To further the author’s point, here is an outline of a proposed taxonomy of disinformation trolling (full credit citation to IEEE Computer Edge publication and authors given below and I heartily recommend reading the full, original article).:

Provocation trolling. To elicit a particular response, such as hostility, from participants of an online forum.

Social-engineering trolling. To incite participants to activities they normally wouldn’t have undertaken….

Grooming trolling. Sending messages intended to insinuate the sender into the mind of the recipient as a slippery slope to further persuasion.

Firehose trolling. High-volume, rapid, continuous trolling without concern for consistency. Apparently a favorite of Russia, it focuses not on promoting a particular position or viewpoint but on divisiveness for its own sake.

Ad hominem trolling. Defaming or discrediting individuals or groups to delegitimize their positions without engaging them on their merits.

Jam trolling. Disrupting a discussion or communication channel with high message volume (the trolling equivalent to a DOS attack).

Sport trolling. Trolling for the self- gratification of the troll (just for the fun of it).

Snag trolling. Evoking responses to satisfy curiosity. One of the less toxic varieties, this nevertheless tends to divert and obscure.

Nuisance trolling. Derailing the thread of an online forum (blog, chatroom, and so on) for no other reason than to irritate other participants. A variant of sport trolling.

Diversion trolling. An insidious tactic for blocking legitimate communication to support one candidate but is so annoying that it actually helps the opposing candidate.

Amplification/relay trolling. This occurs when one trolling venue is used to amplify the message of some other source….

Rehearsal trolling. Baiting opponents to respond in order to reel in the “fish,” or victim, to practice arguing with.

Proxy trolling. Using intermediary trolls to do the heavy lifting. De rigueur for large organizations, which hire people to do it.

Faux-facts trolling. Deliberate spreading of fake news, alt-facts, and other lies under the guise of truth.

PR trolling. Making the troll or the views the troll is promulgating look good rather than attacking others.

Institute of Electrical and Electronic Engineers, “Compuiting Edge,” May 2019, “The Online Trolling Ecosystem,” by Hal Berghel and Daniel Berleant, pp. 38-45.