History in the making at America Magazine 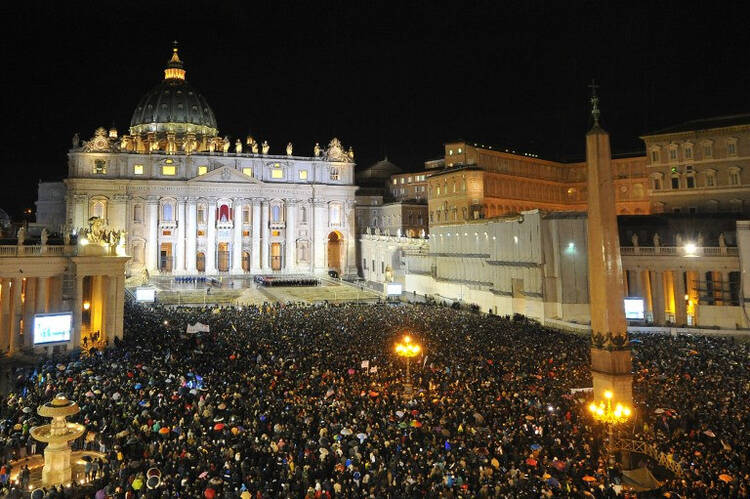 Phil Graham, the late publisher of The Washington Post, is often credited with popularizing the notion that newspapers are “the first rough draft of history.” That was certainly true in Mr. Graham’s day, the mid-20th century, a time when newspapers so dominated the national discourse that New Yorkers saw fit to name two of our most famous squares for The New York Times and The New York Herald-Tribune. Today, of course, newspapers are a dying breed; and the first rough draft of history is recorded in digital characters and so-called hot takes on social media.

Magazines like America are not really the first draft of anything. Reviews like ours exist to provide a digest or analysis of events, often from a definite ideological or philosophical perspective. By definition, then, most of our content is several steps removed from the news cycle. Still, from time to time, when the publishing planets align, we break news as well as analyze it. This issue of America is a good example. In these pages, we publish an exclusive excerpt from a new book by Gerard O’Connell, America’s Vatican correspondent. The Election of Pope Francis: An Inside Account of the Conclave That Changed History is the first definitive account of that seminal ecclesial event.

Still, from time to time, when the publishing planets align, we break news as well as analyze it. This issue of America is a good example.

Six years on, it is easy to forget just how big a deal this was. The first resignation of a pope in 800 years was followed in quick order by the election of the first Jesuit pope. I was there, in St. Peter’s Square, waiting for the white smoke along with thousands of other cold, wet pilgrims. When night fell, many of us had started to head out of the square, looking for a place to dry off and have a hot drink, when a roar from the crowd washed over us. White smoke! But who? I am hard of hearing, and when the name was first announced I thought the camerlengo had said “Broglio” rather than “Bergoglio.” For a moment I wondered why the College of Cardinals would have elected an American archbishop who wasn’t even a cardinal. A split second later the Roman woman standing next to me starting yelling “The Jesuit! They’ve elected the Jesuit!”

Why America magazine is global in spirit and content
Matt Malone, S.J.

New technologies are a conduit for evangelization
Matt Malone, S.J.

Indeed, they had elected the Jesuit. This was unheard of, unprecedented, seemingly out of nowhere. In the days leading up to this big moment, I had spoken to dozens of Vatican insiders, reporters and historians. “Who will they pick?” was the question that led every conversation. So intense was the speculation and desire to know what was happening that the conclave’s organizers, according to Mr. O’Connell, went to great measures to prevent the possibility of interception, even choosing “not to use the sound amplification system inside the Sistine Chapel.” Amid all the hubbub, only one person I spoke with told me that the next pope would be Jorge Mario Bergoglio of Argentina. I thought that guy was crazy. Now he is America’s Vatican correspondent.

There is no one better qualified to write this story than Gerard O’Connell. The book is a tour de force, expertly reported and crafted in a style that reads at times like a thriller. I hope you will pick up a copy at your local bookstore or Amazon shopping cart, for this will be required reading for students and scholars for decades to come. Indeed, it is the first and so far definitive draft of this history.

Many of the folks who make America such a special place to work are listed on our masthead in every issue, but there are many more beyond that, including you, our readers, as well as our board of directors and our benefactors. Without the generous support of these men and women, we would not be able to bring you the best in Catholic journalism every day online and every other week in print.

Among that amazing community of supporters, William J. Loschert, a graduate of Fordham University and a longtime supporter of the Jesuits, has been an extraordinary friend to this review. In gratitude for his generosity, our state-of-the-art audio and video studio will be renamed this month the William J. Loschert Studio at America
Media. Please pray for Bill and for all our community, as we continue to pray for you.

And if you are in New York, please stop by and visit the studio and our new offices. We are located on the Avenue of the Americas, which, while I think we’ve earned the honor, is not in fact named for the magazine.

Dear Fr. Malone, though America may not break the same type of news as the secular press, it certainly does break the "good news," the most important news of all. America Media is superb. Thank you. (And I'm happy to help you break some other news, especially while a Jesuit is pope!)