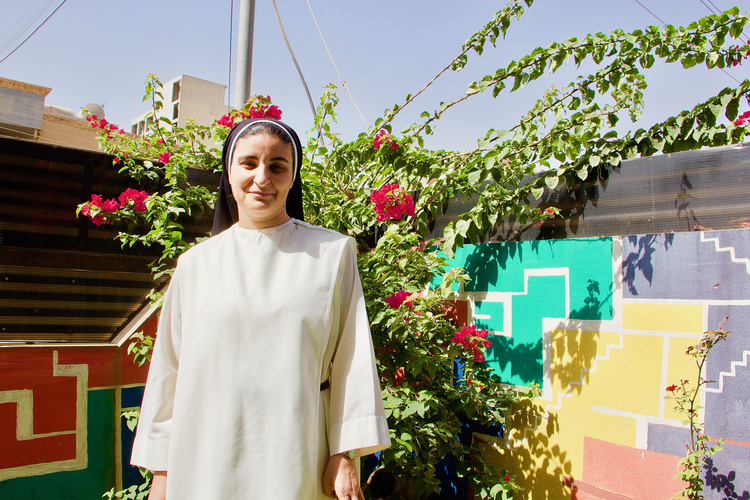 Sister Nazik Matty in her garden in Erbil. Photo by Kevin Clarke.

The Christian families of Qaraqosh in northern Iraq were driven from their homes when ISIS extremists overran the city in August 2014. Those who have returned confront a difficult task—rebuilding homes, businesses and churches that had been damaged or destroyed during the ISIS occupation or the coalition air-and-ground offensive to drive the militants out of the city in 2017. Surveying the the reconstruction efforts, Joe Cassar, S.J., who leads the efforts of Jesuit Refugee Service in the region, told America rebuilding houses is good and necessary, but just as important is rebuilding trust.

In one Qaraqosh neighborhood, Hai Alaskary, the Syriac and Chaldean Catholics of this largely Christian city had lived side by side with Shabak-Shiite neighbors before ISIS. Now they are learning how to live together again. The Brothers of Jesus the Redeemer, a small, recently established community, picked a small house in this neighborhood to continue their work. Brother Wissam Marzeena Karo describes his ministry as one of presence and hospitality.

“We like to start with simple things, simple contact,” said Brother Wissam. “This is our mission, hospitality of the person without asking if someone is Muslim or Christian.”

The brothers hosted an Eid al-Fitr celebration, marking the end of the fasting season of Ramadan last year, persuading Hai Alaskary’s Christian families to prepare a feast for their Muslim neighbors. The celebration brought about 400 people from both faith communities together, he said.

Brother Wissam has also taught English, mathematics and computer science at an after-school enrichment program sponsored by J.R.S. that helps get educations derailed by the conflict back on track while it brings Christian and Muslim young people together. His small order has been granted some land by the Syriac Catholic Archbishop Yohanna Petrous Moshe, and he hopes to build a monastery on the property. It is his vision that it can serve as a center for contemplation and dialogue for people of all faiths.

He said his Muslim neighbors share the worry that the Christian community in Iraq is dying out because of the years of upheaval and violence. “They tell me, ‘We need Christianity in Iraq. Without you Christians it is like a desert, without meaning, without value.’” He thinks that by maintaining direct contact with Muslims rather than withdrawing in apprehension, Iraq’s Christians can improve their relationships with the majority groups.

“We have a mission” in Iraq, “that we should be ready to stay, to take this responsibility,” no matter the risks.

It is the nation’s politicians, he said, who exploit tensions for political gain in rhetorical exercises that can drive the religious communities apart, sometimes lethally. “The simple people can come together,” he insisted.

It will be a trial for the Christians to stay in Iraq, Brother Wissam acknowledges. Many will be tempted to leave. He intends to stay.

“We have a mission here; we have a mission with the Muslim people. Our Christian community believes in this mission, that we should be ready to stay, to take this responsibility,” no matter the risks, he said.

He shrugged. Noting that many of his Muslim neighbors also suffered dearly under the brutality of ISIS, he said, “All the people here are at risk.”

A short distance from Qaraqosh, many of the city’s former residents live in the Kurdistan Regional Government’s capital of Erbil. Thousands of Christian families found refuge here as ISIS raged across Nineveh.

During this near-exile from Qaraqosh, Sister Nazik Matty and her fellow Dominican Sisters of Saint Catherine of Siena created an ad hoc Catholic school system for refugee children from Nineveh. Now she plans to do the same in reverse, rebuilding schools in Nineveh as Christians return.

Sister Matty’s own family is an exemplar both of the suffering of Nineveh’s Christians and the looming practical challenges to their re-establishment in the province. Her brothers and sisters, eight altogether, have been scattered by ISIS across the globe; some as close as Lebanon and Jordan but others as distant as the United States, Sweden, Germany and Australia. It is a tale many Christian families here can tell—once tightly connected extended families who lived in the same villages for generations now struggle to maintain ties over internet connections and haphazard visits home.

Sister Matty’s family home in Bashiqa had been badly damaged during the occupation but has been repaired. She gets to Bashiqa as often as she can to check on the property. “Thank God, our house was still standing,” after ISIS was driven out, she said, though it had been completely looted and vandalized. All that was left of her family’s belongings was one family portrait. She is delighted to have recovered it. Scores of homes in Bashiqa were in worse condition and some may never be rebuilt, and the families who lived in them will never return. A Yazidi family who lost their home to ISIS lives in Sister Matty’s home now, and she is content to allow them to continue stay there while they try to rebuild their own disrupted lives.

“I love being there because there are so many memories,” she said of her visits to Bashiqa. But it is no easy task getting to the city from Erbil. Bashiqa, once home largely to Christians and Yazidi, is in territory claimed by both the Iraqi Central Government and the K.R.G. Reaching it means crossing a number of military checkpoints where the attention and attitude of the armed men assigned to them can vary widely.

The sisters maintain kindergartens in Qaraqosh and Bashiqa. They have a school in Erbil as well for the Christians from Mosul and Qaraqosh who have been unable or unwilling to return to that city since its liberation from ISIS. Sister Matty said that many of the children she and her sisters work with are suffering from trauma related to their loss of their homes and their flight from Mosul and the cities and villages of the Nineveh plains.

“Some children are completely silent; they don’t talk all day. Some don’t play.”

Others are angry and disorderly, she said, but she believes they cannot be disciplined as they might have been in the past. The sisters understand the origins of the behavior.

She recalled one child in particular whose family was considering leaving Erbil to return to the home they had fled as ISIS closed in. “‘Am I going to lose all my toys again?’” the child asked Sister Matty.

“He thinks every time they move,” she said, “it means Daesh [ISIS] is coming again, so he has to leave everything behind.”

Sister Matty has managed to reopen schools with essentially no support from the central government. Parents pay what they can, but many have been un- or underemployed since they escaped to Erbil, Dohuk and other cities north of the communities that were overrun by ISIS. If students want to come but are too poor to pay the modest tuition, she said, the sisters will find a way to get them access. The Dominicans welcome children of all faiths to the schools.

“To keep the cross in the Middle East, it is not just our dream; it must be the dream of God as well.”

The sisters cut back their program in Erbil, much to the consternation of the refugee parents, because the expectation has been that the government wanted Christian families to return to their communities of origin. So far, that reverse migration has not materialized. “If people return, it is because they have faith in God and the help of the church,” Sister Matty said. “Honestly, the government will not help.”

ISIS represented something of a double blow to her teaching order. Iraqi Catholic schools had been nationalized by the government during the 1970s. The Dominicans had just managed to have schools restored to their control and modernized for the new school year in 2014 when ISIS struck, Sister Matty said, “and ruined everything.” She is eager to rebuild despite such setbacks.

“We are ready to forgive and continue our work,” she said, “but if we are waiting only for a different version of ISIS to return, that would not be fair.”

Uncertainty about the future remains the “biggest and worst challenge” her families confront, she said. But it is a challenge Christians in Iraq have long contended with, she argues. The suffering visited on Christians by ISIS was severe but nothing all that new, she explained, reciting a sorry litany of the people and events that have meant persecution for Iraqi Christians: “Saddam, Osama bin Laden, Al Qaeda, the American invasion, ISIS.

“Personally, I believe that living in the Middle East is really beyond our [individual] powers and our abilities,” Sister Matty said. “To keep the cross in the Middle East, I think, it is not just our dream; it must be the dream of God as well.”

Living together without hate is the way forward.

This article also appeared in print, under the headline “GoodNews: A Dominican sister restores Catholic schools in northern Iraq,” in the May 13, 2019, issue.

Kevin Clarke is America’s chief correspondent and the author of Oscar Romero: Love Must Win Out (Liturgical Press). He traveled to Iraq in October.