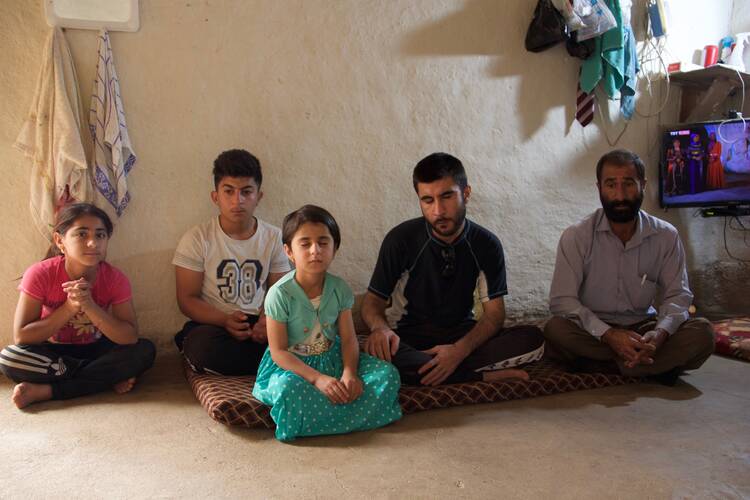 A Yazidi family in a temporary shelter in Iraq. (Kevin Clarke)

Editor’s note: Today’s winner of the Nobel Peace Prize is Nadia Murad, a 24-year-old Yazidi woman who advocates on behalf of her community and survivors of genocide. She was among the thousands of Yazidi women who were abducted and enslaved by the self-proclaimed Islamic State (ISIS). Read her statement here.

There are probably few things as useless at a camp for people who are refugees in their own country than a journalist. I.D.P.s, or internally displaced people as they are known in the humanitarian trade, surely have enough on their plates without having to play host to bumbling Westerners landing among them to rubberneck their suffering.

And it did not take long for me to feel the eyes of this exhausted father of eight boring through me as he endured the usual introductions when I entered what has been his thoroughly makeshift home. Part tent, part restored concrete block building, held together with a variety of rope, tarp and plastic improvisations, it has been a place of stifling refuge since he and his family escaped from ISIS into the Sinjar Mountains in Kurdistan in August 2014.

More than four years later he smolders in this camp, fed up with answering questions. He is a Yazidi, and most of the world seems to have moved on from his personal suffering and his people’s collective tragedy. Surveying his meager surroundings, his eyes return unblinking to my face. “Look at this place. If you were me, wouldn’t you rather be home? Wouldn’t you rather be anywhere but here? Would you want to live here?”

While significant numbers of Syriac Orthodox, Syriac Catholic and Chaldean Catholic families have begun to return to the villages in the Nineveh Plains they fled during the awful ISIS onslaught of 2014, very few Yazidi families have been able to escape from the I.D.P. camps and other temporary shelters they have inhabited in Syria and Iraqi Kurdistan. Their villages have not been swept for mines and booby traps left behind when ISIS was dislodged by Iraqi army, Kurdish forces and Shiite militia in October 2016; they are not receiving assistance in rebuilding blasted and burned homes, and the security situation in their native Sinjar region is arguably worse today than it was when Daesh was the only threat to contend with. Now Turkey, the Kurdistan Workers’ Party, the Iraqi army and Shiite militia vie for control of their home region while miscellaneous armed bands prowl what had been the Yazidi native lands.

This father cannot understand why no one will step forward to help the Yazidi people, not the United States nor the Iraqi central government nor the United Nations. His personal burdens have also become unendurable: Five of his eight children were born with congenital blindness, and he has pleaded in vain for assistance for their disability from a succession of Western humanitarian intervention agents. Some make promises, never to be heard from again; others listen with sympathy but offer no help. He is fed up with talking and begging for assistance.

Five of his eight children were born with congenital blindness, and he has pleaded in vain for assistance for their disability from a succession of Western humanitarian intervention agents.

He pulled these children across the Sinjar Mountains to escape the Daesh, he tells me. “Can you imagine what that was like? Stopping every 20 meters to go back for each child?” His blind children, of course, could not navigate across the rocky mountain slope on their own. Somehow he and his wife kept their children alive through a grueling seven days under the searing desert sun of August, with no food and no access to water, while other parents abandoned their dying children around them.

After the family’s rescue, they were brought to this place, Sharya, in Kurdistan, along with hundreds of other Yazidi families who still live here, waiting. For some that wait has become unbearable. Jesuit Refugee Service team members who work with the Yazidi here say that suicide, especially among teenagers, has been an increasingly worrisome problem as the community loses hope.

Just a few years ago their plight was declared a genocide, and the eyes of the world were focused on the drama of their rescue in northern Iraq. But other crises shifted attention in the region and with little to no international advocacy to support them, the Yazidis as a people, and of course this family, in particular, seem to have become forgotten.

“I don’t want resettlement; I don’t want to live in Europe,” the father tells me. “I just want someone to give treatment to my children.” And he wants one day to go home to the Sinjar region—if his family could be safe there again, if someone could help them rebuild.

“What do you think it is like, living here?” he asks. “Watching my two sons walk into each other in this place because they cannot see each other.” There is no work; there is no school for his blind children.

“I wish me and my children were dead [rather] than to live like this,” he tells me. “I think now it would have been better if we all died on that mountain than to see my children like this and know I can’t do anything for them,” he says.

His eyes grow slightly frantic as he sees that I am preparing to leave. We are saying our goodbyes; he is nodding politely. Then he gestures to his youngest daughter, perhaps 5 or 6, her rolling, unfocused eyes an obvious sign of her blindness. “Could you take her? Could you take my daughter [for treatment]?”

The question chases me out of the shelter.

I will make a donation to Jesuit Relief Services to obtain assistance for these blind children. Will anyone join me?