GoodNews: How one Jesuit parish is bringing food and health care to the margins in East Timor 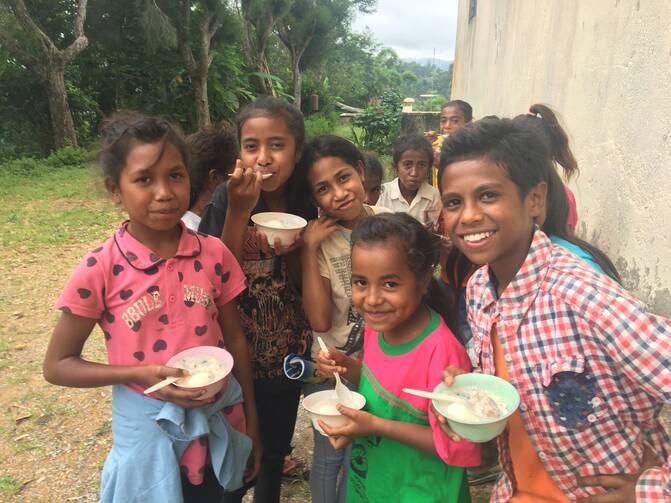 As the road climbs from the East Timorese hillside town of Railaco and its Our Lady of Fatima parish, through jungle peppered with wild coffee trees, the air cools.

At the top of the mountain, an aging four-wheel-drive stacked with plates, spoons and a massive pot of soupy stew turns up a narrow road, then a narrower one and then finally hauls itself up a stretch of sodden grass to a small, whitewashed church atop the village of Cocoa.

The vehicle comes to a halt on a some flat land behind the church and in front of a small hall. Dozens of thin children appear every which way out of the jungle, along muddy roads and descending hillsides. It is time for some food, and Christina Da Cruz and her colleague Leonora Mendonsa are here to provide as much nutrition to as many kids as they can.

Here, in one of Southeast Asia’s poorest countries, where about 90 percent of the population is Catholic, almost 42 percent of the people get by on less than $1.54 a day, according to the Asian Development Bank. Even official government statistics peg child malnutrition at 30 percent, one of the highest rates anywhere in the world.

Before the meal, the children are organized into two groups and participate in learning and self-expression exercises, mixed with some religious education, for about 30 minutes. After the clapping, chatting and a little singing are over, the children converge on the back of the now-opened truck.

The Jesuit program’s emphasis on nutrition, health and education components is a trifecta of basic social needs that its sponsors say are essential for the nation’s future development.

Longuinhos da Costa Monteiro, a thin and malnourished 10-year-old, approaches the truck. “Every day I get hungry and I am supposed to eat three times, but often I don’t,” she says. “So this feeding program is important for me to build my body and then to help my brain to be strong. When I am strong, it means my future is bright.”

Her explanation neatly illustrates the Jesuit program’s emphasis on nutrition, health and education components, a trifecta of basic social needs—along with sanitation and other infrastructure—that its sponsors say are essential for the nation’s future development. The nutrition program has its roots in an earlier version run by the Good Samaritan sisters in the 2000s. Its current incarnation includes a church-run medical clinic in Railaco itself and a traveling medical program that provides basic health care to remote mountain villages. A secondary school is also offered in Railaco, with ever-improving facilities, services and results.

The projects are mostly funded by St. Canice’s Parish in the Kings Cross area of Sydney, Australia, along with the support of other individual donors.

“St. Canice’s was looking around East Timor for a sister Jesuit parish,” Bong Abad Santos, S.J., a Filipino missionary and medical doctor in charge of health and nutrition programs, explains. “Our parish at Railaco was, by that time, the only parish [in East Timor] run by the Jesuits, so really they did not have much choice,” he jokes.

Father Santos was posted to East Timor in 2004, taking charge of the nutrition program and initiating its sister program for basic health care. Railaco now has a permanent clinic run by Father Santos. He travels three times a week to remote villages on treacherous, unpaved, cliff-hugging roads—journeys outside the city that are even more dangerous during the rainy season between November and March.

Adults here are as likely to suffer from malnutrition as the children, he says, although bad habits—smoking for men and chewing betel nuts for women—contribute to the problem. “This dampens their appetites or leads them to not eat [or hydrate] properly,” Father Santos explains. Combined with difficult working conditions, the people become “prone to infections and body pains.”

Exacerbating health problems for the Timorese is the chronic under-availability of medicine.

“Children tend to thrive when being breastfed adequately,” he says, “but when they [reach solid food] age, they start lacking proper nutrition and become prone to infection.”

Exacerbating health problems for the Timorese is the chronic under-availability of medicine. In Liquiça District, where the mountains are imposing and roads sometimes impassable, Father Santos tends to a few dozen people.

“I think the government should do more to help us in this isolated area,” Augusta Gonçalves, 43, complains. “My grandson is sick and I asked my daughter to take him to the state health center, but the people said there is no medicine. I have no money to buy the medicine, so Father Bong is our last hope.”

Father Santos says that these days accessing medicine is more difficult even for him. “Before, I used to get new and cheaper, close-to-expiration medications from Australia, but because of government regulations, I cannot do that now,” he says. He mostly buys medicine produced in Indonesia or India from pharmacies in the Timorese capital of Dili. “These are actually the bulk of our expenses; we tend to get by...using basic medication that we make available to our patients.”

In charge of fundraising for the the Railaco project at St. Canice’s is parishioner Michael Musgrave, 77, a former multinational executive at a U.S. corporation. “I lived off the fat of the land for so many years; I was looking to give something back,” Mr. Musgrave says.

After retiring early, he moved back to Sydney and befriended the Rev. Steve Sinn, then the pastor at St. Canice’s, who introduced him to the program. St. Canice is well known in Sydney for its various social outreach efforts. Kings Cross, where it is located for decades, has been Sydney’s “red light” district, and the parish has long provided shelter and food for the many homeless people in the area.

“This program is just carried out by the Jesuit priest, but I want to recommend to our government, if it is possible, to please provide good and healthy food for our children.”

“For the first time in my life, I saw a man who was interested in only the homeless, in providing for people with nothing,” Mr. Musgrave says about Father Sinn, “who was only interested in the broken people.

“We are all broken in our own way,” he adds. “I went with him to Railaco in 2009. I have since then been up there three times.”

The programs run out of Railaco are plugging a hole in the health care system that critics argue the government should be responsible for filling. Over the past 19 months the nation’s politicians have prioritized a bitter partisan political debate over multibillion-dollar funding for energy processing infrastructure; this has meant that the needs of ordinary people run second.

“The overall cost of the budget has dropped to just under $1.5 billion, but East Timorese civil society remains concerned about under-investment in basic development indicators,” Michael Leach, professor of politics at Australia’s Swinburne University of Technology, says.

“East Timorese civil society remains concerned that there is little increase to health, agricultural and water spending despite being declared ‘budget priorities’ by the government.

Parents in the villages the Jesuit programs visit shared their dissatisfaction. Imelda Soares, 29, accompanied her children as they collected their meals. “The government should do better than what our priest is doing,” she says. “So far this program is just carried out by the Jesuit priest, but I want to recommend to our government, if it is possible, to please provide good and healthy food for our children.”

“It’s all related,” Mr. Musgrave says. “If the students are properly fed, they can study properly. It’s really critical.”

Mr. Leach notes that while an $11 million increase, compared to the previous year, to education spending in the new budget “is welcome, there are concerns this is insufficient to meet rapidly growing needs in this sector.”

After 10 days of protest, Haiti steps back from the brink
Mario Ariza

At the Railaco school, basic dormitory buildings were constructed—one for boys and one for girls—as part of a plan to confront academic delinquency and underperformance. Mr. Musgrave explains that students now can stay during the week and return to their families on the weekends “so they don’t have to go home after school and do things like fetching water from the creek. The aim was to make sure they studied and raised their academic standards; now we have kids from all over the place wanting to get in.”

Helen Forde, C.E.O. of the Jesuit Mission Australia, explains that the girls’ dormitory was rebuilt a few years ago, and last year “we secured more than $200,000 from some very generous friends of Jesuit Mission to rebuild the boys’ dormitory.” The school also now has its own canteen, a service that both keeps students properly fed and stops them drifting into town to buy food when that could mean missing school.

In May, Mr. Musgrave will take 16 parishioners—a number of them children who will travel with a parent—from St. Canice’s to Railaco for an “immersion” program. “It’s not an institutional or administrative campaign to rally support. As ordinary people, we go to Railaco to listen to the voices of others who speak of ordinary needs,” Mr. Musgrave says. “This is grassroots…. We then return home to share our personal experiences in order to inform the wider parish about future opportunities and involvements.”

He admits he is hoping to find one or more people who can share some of the fund-raising work and begin to lift the load from him as part of a succession plan. “I was wont to pass it over just yet, but there is so much more that could be done.”

Ms. Forde says the organization and the Railaco Jesuits have broader ambitions. “What we have now is a terrific platform for further growth and the provision of more services—for example, sanitation and water storage—in the area,” she says, “but we will take things step by step.”

Michael Sainsbury is a Bangkok-based journalist.

Although the government of East Timor undoubtedly can do more, I'm sure that the people helped by the Jesuit parish program appreciate the assistance. As a retired Special Education teacher, I agree that education is crucial so that children grow up to be mature, responsible adults. I also know that eating properly and regularly is important. A 2005 study in the Journal of the American Dietetic Association found that eating a healthy breakfast improves a person's alertness and mood. Another benefit of breakfast according to the study is that the meal improves memory, problem solving and concentration skills. So, eating healthy also has educational benefits. Finally, I live in a nursing home/rehabilitation center. We're fortunate that with few exceptions the nurses and other staff are caring and competent, and help us maintain our health.