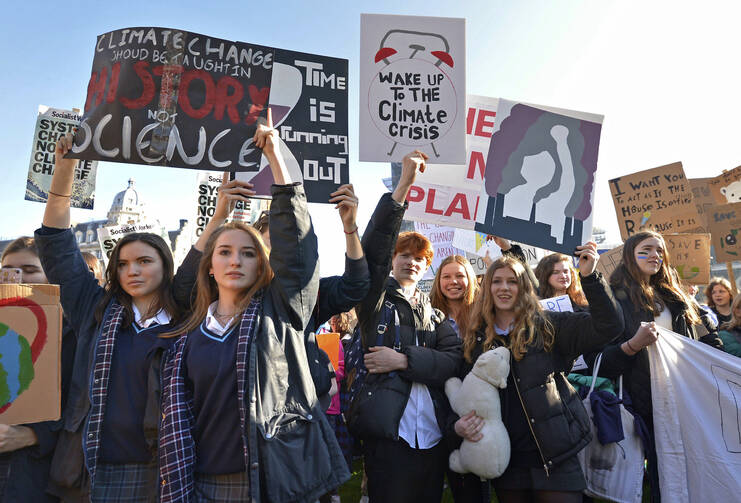 Students join the Youth Strike 4 Climate movement during a climate change protest near Parliament in London on Feb. 15. (Nick Ansell/PA via AP)

In this febrile February, when tempers are frayed and listening is an abandoned art, a new and unexpected form of protest emerged in Britain. As in a number of other places around the world, the protesters marching through central London on Feb. 15 to call for action against climate change were teens, conducting a one-day high school strike. These young people have become exasperated by their elders’ failure of leadership in confronting the climate crisis, according to the Facebook page for the Global Climate Strike For Future, scheduled for March 15.

According to BBC estimates, 15,000 young people from the southernmost tip of England to the Scottish Highlands took part in the action on Feb. 15. They have schooled the rest of us that the disastrous way in which their elders are handling Brexit is not the only way in which their future is being ruined. It is the failure of those of us whose school days are long behind us to deal with the coming climate emergency that has angered and energized these younger people.

Prime Minister Theresa May, possibly clutching at the straw of a moment’s diversion from her struggle to save the Conservative Party, deprecated the children in mummy-knows-best terms.

Responses to the students’ actions have been predictable, po-faced and patronizing. Prime Minister Theresa May, possibly clutching at the straw of a moment’s diversion from her struggle to save the Conservative Party, deprecated the children in mummy-knows-best terms.

Downing Street issued a statement that the disruption to school time was damaging for pupils and “increases teachers’ workloads and wastes lesson time that teachers have carefully prepared for.” Mrs. May apparently failed to recognize how every child interviewed in the media had demonstrated how well they had educated themselves on the issue of climate change.

“Everybody wants young people to be engaged in the issues that affect them most so that we can build a brighter future for all of us,” said the prime minister’s official spokesperson, speaking for a government that is intent on vitiating that future through its shambolic Brexit policy.

The young people make the point that their elders did not exactly manage things well even if they had never bunked off classes. These young people will be the ones who will have to live with the disastrous results of inaction on climate change. The most recent United Nations report has warned that only 12 years remain for the world  to avoid the worst effects of global warming. All the evidence is there: droughts, heat waves and melting polar and mountain-glacier ice. Only last week, scientists predicted a collapse of the planet’s insect population, a catastrophe that would likewise have a devastating impact on the earth’s other inhabitants.

We are now relying on our children to act where we have failed, for their futures and that of their offspring.

The student protests appear to have drawn inspiration from a diminutive, pig-tailed Swedish girl of 15, Greta Thunberg. She skips school each Friday to protest outside the Swedish Parliament, and she has struck a chord in her nation, which recently suffered wildfires and the hottest summer since recordkeeping began. Sweden enjoys a good reputation for environmental action, having enacted ambitious climate laws that easily exceed the 2015 Paris Accord targets.

But for Ms. Thunberg, that’s not good enough. She insists, “this is too little too late, it needs to come much faster. Sweden is not a green paradise.”

We are now relying on our children to act where we have failed, for their futures and that of their offspring. We have trashed the planet and decided to hand it on to them in this condition, described by Pope Francis in “Laudato Si’” as a trash heap. “Laudato Si’” maintained that the pursuit of profit is incompatible with the rhythms of nature or the complexity of vulnerable ecosystems. Carbon-free solutions and sustainable energy generation are increasingly viable, but their development can’t be left to the greedy magic of market forces.

The UK Youth Climate Coalition lists, among its demands, proper climate-change education in the school curriculum. Among the banners at the February march, convened near Parliament Square in Westminster, were “I’ve seen smarter cabinets at IKEA,” “I’m looking for a hot date, not a hot planet,” and “Sorry, I can’t tidy my bedroom, I have to save the planet.” Another prominent banner read: “We’re skipping lessons to teach you one.” The schoolkids who missed class for a day did not compromise their education but enhanced it. The broader U.K. society and its political leaders must not skip the lessons these students are teaching.

Which only goes to show, once again, how little our children have to teach us. Repeating platitudes you saw on the rear bumper of your parents' Volvo is no substitute for critical thinking.

And your oh-so-critical thinking is derived from what? Climatological science? Or decades of self-deluding polyannism. The science is in and these kids, who will have to live in a planet formed by the self-centeredness and inertia of their elders, are in synch with that science. Good on them. Bad on the smug old ignoramuses who will hogtie action required to at least minimize the planetary damage.

What passes for"climate science education" is nothing more than a convenient money grab. "Climate-change education" is irrelevant. I've been to more than a few meetings where the gist was " We're all doomed! (And afterwards) Where is my paycheck!" Honestly, when was the last time you read an atricle or heard a lecture concerning tangible possibilities? When was the last time you heard the phrase "carbon tax" or "carbon reclamation"? Mostly, what we hear is "solar and wind power with no automobiles and everyone living in the cities will equal THE solution." This is not thoughtful at all and simple amounts to use of buzz words for the oh so important feel good effect. Like almost everything, there is heavy lifting to be done but no one wants to do it. Let's all go to another lecture and listen to another VIP. Sheesh!

I'm still waithing for the plethora of articles and lectures entitled, "Climate Change is real and this is what we can do."

Your "carefully selected" quote is made up by you and is not in the document (see below re the thoroughness of the review). http://getfreecalendar.com/