President Trump traveled to the U.S.-Mexico border today, calling attention to the ongoing impasse with Democrats in Congress over funding for a border wall.

The federal government is nearly three weeks into a partial shutdown, and hundreds of thousands of government workers are going without pay. Mr. Trump has said he will veto any funding bill that does not include $5.7 billion for a border wall while Democratic leaders have promised to fight wall construction.

If they cannot find a compromise, Mr. Trump said he would “declare a national emergency” as he left for Texas, according to the Associated Press.

Sister Norma Pimentel, M.J., the executive director of Catholic Charities in the Rio Grande Valley, welcomed the president to the border and invited him to see the work of staff and volunteers assisting people from throughout Central America who are seeking asylum in the United States.

“Regardless of who we are and where we came from, we remain part of the human family and are called to live in solidarity with one another.”

“We witness daily how, working together, people of all faiths can focus on helping the person in front of us,” Sister Pimentel, who was present during a roundtable discussion with Mr. Trump, wrote in an op-ed addressed to the president yesterday in The Washington Post. “Regardless of who we are and where we came from, we remain part of the human family and are called to live in solidarity with one another.”

Last month, during a panel discussion on immigration hosted by America Media, Sister Pimentel took issue with immigrants being characterized as “invaders.”

“There’s a fear that paralyzes us, that makes us distance ourselves from seeing the reality of human life for what it is,” she said. “All we need to do is connect with our God. There is no law above God’s law.”

Sister Pimentel said she often asks immigrants why they decide to undertake the dangerous journey to the United States. They tell her they had no choice, she said, and that they fled to save their lives and the lives of their children.

At the same time, Sister Pimentel acknowledged the role of border security in southern Texas, taking issue with how agents are sometimes characterized by critics of the government. 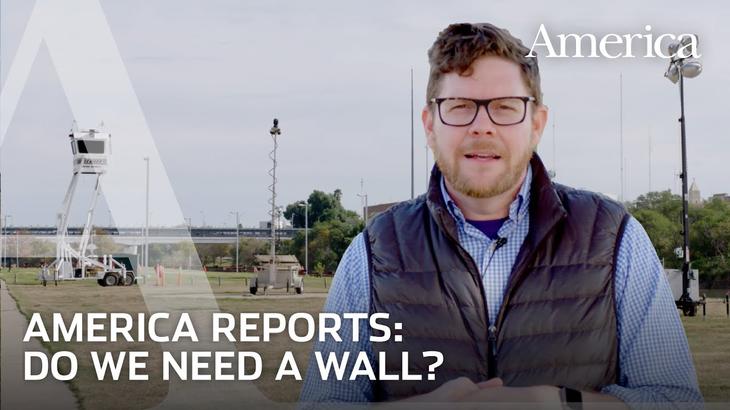 “For them to be put down because they are doing their jobs, I don’t understand that. That’s fake news,” she said. “They do their jobs very well. They are not catching and releasing criminals. They are there to protect us and to keep our borders safe. And that is what they do.”

“There’s a fear that paralyzes us, that makes us distance ourselves from seeing the reality of human life for what it is.”

Sister Pimentel was also a guest on the podcast Jesuitical in November, where she spoke about family separations, the immigrant caravan and birthright citizenship. She said immigration is not about politics but about human beings.

Sean Salai, S.J.interviewed Sister Pimentel for America in September. She told him that the most pressing issue at the border was the number of families that were arriving. Catholics in the United States can help, she told him.

“American Catholics can be part of our circumstances on the border by being in solidarity—in spirit, in prayer, in their involvement—through sharing this reality with others who do not understand what is happening and may be misled to see it as something hurting our country,” she said. “Rather it’s an opportunity to be present to suffering human life. We have a responsibility to respond to that, to see it as an opportunity rather than as a fear that we have to protect ourselves.”

On Tuesday, Mr. Trump made his case for why the nation should strengthen and extend the border wall during a televised address from the Oval Office.

“America proudly welcomes millions of lawful immigrants who enrich our society and contribute to our nation. But, all Americans are hurt by uncontrolled illegal migration,” the president said. He argued that undocumented immigrants are a strain on public resources and “drive down” jobs and wages. “This is a humanitarian crisis—a crisis of the heart and a crisis of the soul,” he said.

Yet the number of illegal border crossings have been going down since 2000. The Center for Migration Studies in New York reports that people who enter the country legally and overstay their visas account for about two-thirds of new undocumented immigrants.

I read Sister Pimentel’s editorial in the Washington Post this morning. Inspiring.

we need a more nuanced approach to immigration than "we are just part of the human family and are called to live in solidarity with one another.”
That kind of naive idealism sounds good, but the devil is in the details and those details include the facts that we are being besieged by thousands of Latino immigrants who bring with them low education, high poverty and high birthrate--the latter being a consequence of Catholic teaching. It is hard to live in solidarity with people who share none of your values, as Germans are discovering the hard way from the influx of millions of Muslim migrants since 2015. Most of us struggle to get by on a daily basis--witness the disastrous effects on millions of Americans idled by the government shutdown. Life is not black and white as the good sister tries to argue, and we need solutions that address people where they are, not where someone (like Pimentel) would like them to be.

It's difficult to reason with your position. Muslims who have emigrated to Germany brought their own value system with them. People do that. Humanity does not change its 'stripes' as one switches a light on or off. It takes time, sometimes a long time for value systems to change, especially if they are significantly different than those found in their new country. With respect to high birthrates, given that the United States does not have a birth rate high enough to replace those who die, and assuming our needs for new and replacement workers continues, where do they come from? Elsewhere, that's where. BTW: This is not a new phenomenon. Within our nation, we have had out-migration States and in-migration States depending upon economic cycles. I have more but I don't think it matters.

The usual anti-Muslim fear mongering trash. How funny that the author attacks the Sister for being "black and white" while they paint Muslims with a broad, and inaccurate, brush.

Sister Pimentel’s remark about “Helping the person in front of us” is a straight line derivation from the Good Samaritan lesson. If corporal works of mercy are idealistic, then practical Christian response is idealistic. And blaming the person in need for being in need isn’t part of the lesson.

Shouldn't our efforts be directed at eliminating what is causing the problem for all one thousand?

“,,,does helping that one absolve us of helping the others?” In my opinion, if a person in good conscience is convinced that he or she is simply incapable of pursuing both goals simultaneously, that is, helping the person in front of us and also advocating for a geopolitical outcome that reduces the desperation driving individuals to flee homelands, then the question of needing absolution simply does not arise. I think that one of the attributes of God is right reason, which would preclude assignment of guilt for failure to accomplish the impossible.

The right answer is that we can probably help the thousands but no author in these discussions is advocating it. The world is rapidly ridding itself of poverty and no author on this site discusses it. This remarkable advance has been slowly going on for over 200 years and has accelerated in the last 70. To rid poverty from Central America would cause the Jesuits to advocate for something they have been advocating against.

So everybody is on the same page, here is a good description of the current and immediately planned border barrier. https://washex.am/2RoEIQ2

“Yet the number of illegal border crossings have been going down since 2000. The Center for Migration Studies in New York reports that people who enter the country legally and overstay their visas account for about two-thirds of new undocumented immigrants.”

First of all, I wonder why 2000 was the chosen year. What are the numbers for each year? Actually, I am not sure what she is advocating. Is she for a wall but with more legal crossings? It would make the most sense. And better handling of visas should also happen.

On the east and west coasts we have a “wall” of water and air, and people who come here are required to follow a legal process when they enter through the “gates” called ports – both sea and air. The system seems to work fairly well. Why should the land border be any different? People from South and Central America also come here via these means and follow the same laws. Again, why must our land border be treated differently?

Quote - Now, the flow of migrants presents a new and different problem. While smaller than several years ago, it is largely made up of families and unaccompanied children who have no valid claim to asylum but who cannot, by U.S. law, be returned to their home countries.

For thousands upon thousands upon thousands of years brown, indigenous people have wandered the Americas. Why are you shocked and frightened that their mestizo descendants continue to do so. As Mr. Vasconcelos noted long ago, the time of the pure whites is over. The future, like the deep past, is brown. La raza cosmica is forming, and is indeed already here. You can’t stop it.

The future, like the deep past,
is Brown
La raza cosmica coming to town
Mixing colors is fun
Like crayons in the midday sun
E pluribus unum
From the many, one

You must be anti Democratic Party because it is their policies that have oppressed people of color here in the United States and around the world.

Those readers who support the Democratic Party should read “Death of a Nation.” You will learn its sordid history and how today it strives for power off the backs of people of color.

Years ago, I worked in a group home with disabled men. Several of my co-workers were immigrants from Liberia who had fled from a brutal civil war. They were seeking a better life in our nation. I certainly believe that those who are seeking asylum from violence in their homelands should be welcomed into our nation. Perhaps we can't permit unlimited numbers of immigrants into our nation, but I think we can and should welcome more people. God said, "And you shall not oppress a stranger, since you yourselves know the feelings of a stranger, for you also were strangers in the land of Egypt" (Exodus 23: 2).