A conversation and a Catholic “wishlist” for immigration reform 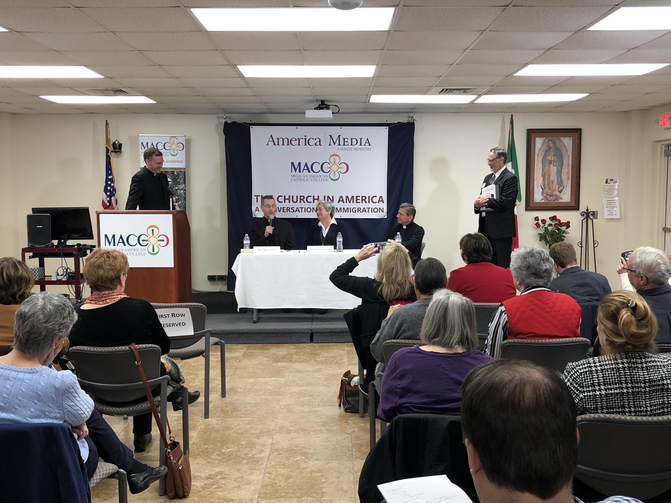 From the church’s point of view, immigration reform should be guided by the tenets of Catholic social teaching, which is based on Scripture, according to Archbishop Gustavo García-Siller of San Antonio, Tex.

“The Catholic position is, first, to bring those who are not a threat out of the shadows to register with the government—ensure that they are not a threat—and place them on a path to citizenship,” Archbishop García-Siller said on Dec. 11 at the Mexican American Catholic College. “By making them known to the government, law enforcement could then focus on true criminal threats.”

“Like the Holy Father, we must stand in solidarity with migrants and refugees by accompanying them,” he said. “We share this journey when we defend them in the public square and ensure that their due process rights are protected.”

Archbishop García-Siller keynoted “The Church in America: A Conversation on Immigration,” an event co-sponsored by America Media and the Mexican American Catholic College. Norma Pimentel, M.J., executive director of Catholic Charities of the Rio Grande Valley and Sean Carroll, S.J., executive director of the Kino Border Initiative in Nogales, Ariz., were respondents to the archbishop’s keynote.

The conversation, which was live-streamed, was part of an America initiative to foster meaningful conversations about the future sustainability and growth of the U.S. Catholic Church, with a particular emphasis on Hispanic Catholics. Coverage has focused on three key topic areas: immigration, criminal justice reform and Catholic education.

A Catholic “plan” for immigration reform, which the archbishop described as a “wishlist,” would include:

While he acknowledged the need for border security, the archbishop took issue with President Trump’s proposal to spend “billions of dollars” building a wall along the 2,000-mile southern border. The factors that drive migrants north, he said, are “stronger than any barriers erected to stop them.”

“The church’s response to a border wall, simply put, always has been to address the push factors driving people to take dangerous journeys to reach the United States,” the archbishop said. “By our addressing endemic poverty and violence in the sending countries, people could and would remain at home to support their families in peace and security. The church’s answer to a border wall is sustainable economic development in developing countries.” The archbishop acknowledged that such an effort is a long-term solution and many legislators do not consider it a politically expedient option. But he insisted it was possible and noted how the uptick in Mexico’s economy stemmed migration from that country to the United States.

In her comments, Sister Pimentel also acknowledged the role of border security in southern Texas, taking issue with how agents are sometimes characterized by critics of the government.

“For them to be put down because they are doing their jobs, I don’t understand that. That’s fake news,” she said. “They do their jobs very well. They are not catching and releasing criminals. They are there to protect us and to keep our borders safe. And that is what they do.”

Yet Sister Pimentel also took issue with immigrants being characterized as “invaders.”

“There’s a fear that paralyzes us, that makes us distance ourselves from seeing the reality of human life for what it is,” she said. “All we need to do is connect with our God. There is no law above God’s law.”

Sister Pimentel said she often asks immigrants why they decide to undertake the dangerous journey to the United States. They tell her they had no choice, she said, and that they fled to save their lives and the lives of their children.

Migrants from Honduras, Guatemala and El Salvador—known as the “Northern Triangle”—head to the United States because of poverty and to escape gang violence, Father Carroll said in his remarks. But changes in climate have also had an impact, he said, noting a story by the Weather Channel.

“It’s a region plagued by inconsistent rain, drought and low crop yields, which has led subsistence farmers to leave their land and migrate north,” Father Carroll said. In the Northern Triangle’s “Dry Corridor,” there are 1 million subsistence farmers and 1.6 million who are food insecure.

Respect for human dignity, the foundation of Catholic social teaching, could help the United States, Mexico and Northern triangle countries work together toward “safe, ordinary and regular migration,” he said. That would entail addressing economic development and gang violence.

The United Nations’ global compact for migration could provide a path forward not just for North America, but for the world, Father Carroll said. Within the United States, the church can help immigrants integrate into the United States as they have “rights and responsibilities to become a part of our society.”

While the panelists had intended to field questions from the audience, the conversation was cut short for Mass. In the packed room of around 100 attendees, some were frustrated that they could not voice their disagreement with certain positions.

Mariachis joined a procession from the Mexican American Catholic College across the street to Assumption Seminary, where Archbishop García-Siller celebrated a Mass in honor of Our Lady of Guadalupe.

J.D. Long-García is a senior editor at America. He oversees an America initiative to foster meaningful conversations about the future sustainability and growth of the U.S. Catholic Church, with a particular emphasis on Hispanic Catholics.

When will the Church admit that Catholic policy is the problem in Latin America? I don’t mean Catholic morality but Church attempts to organize society.

The solution is not to move everyone to the United States but to take what worked in the US and apply it there.

I am all for Catholic discussions - on any subject, but it seems that this never actually materializes, leaving the Laity with an impression that we are an audience and not a member of the cast. This is a two hundred year old philosophy that dealt with illiterates.
What part of scripture deals with social teaching, when it comes to immigration? Jews had few rights under Roman rule and those that they had were strictly enforced, as long as they behaved themselves - Jesus did not take up this issue. The Roman world bestowed rights on Roman citizens - others did not even exist as people. This is clearly shown by Paul, who used his Roman citizenship to escape Jewish law. Christians became subject to persecution every time they were perceived as a challenge - for over three hundred years, until they became a part of the Roman political system.
The one Christian attribute that affects immigration and social teaching is Compassion and this is not at odds with American Immigration law.
I would imagine that every Catholic could agree with the four elements of the Catholic Plan, as long as we have control of our borders. The political charade that we endure is dishonest. None of us is stupid enough to leave our front doors unlocked, which does not prevent us from being kind and compassionate to those in need.