Are the U.S. and China engaged in a trade war? Depends on whom you ask. 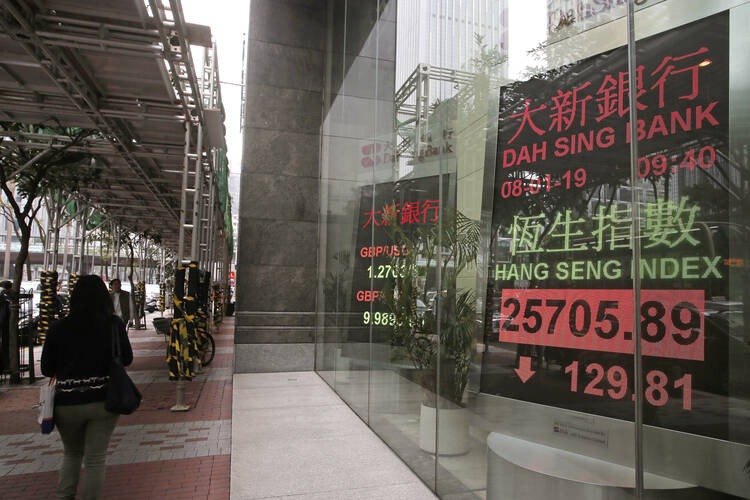 The press in China does not make any mention of an impending “trade war,” only trade frictions, between China and United States. At the same time, Jack Ma, the retiring head of Alibaba and one of the most admired business executives in China, warns that once higher tariffs are imposed, they escalate and can last for more than a decade.

Mr. Ma makes an astute point. Once tariffs come into play they are hard to reverse. Special interests and lobbying groups put considerable effort into blocking efforts at reducing tariffs, since there are clear winners and losers. The winners from more open trade, of course, are large and spread out; the gains to each individual are small, but collectively large, so these winners have little incentive to put resources in the form of time and money into working for lower tariffs. The losers are small and highly concentrated and thus have large incentives to lobby for the continuation or for increasing levels of protective tariffs.

The bashing of China by Trump officials calls back memories of the incoming Clinton administration in 1992 pledging to get tough on Japan, bashing the Japanese on their unfair trade practices and currency manipulation. The Clinton administration also pledged to rethink the as yet unratified North American Free Trade Agreement (NAFTA), negotiated by the outgoing administration of George H.W. Bush.

The press in China does not make any mention of an impending “trade war”—only trade frictions.

Once in office, the Clinton administration realized the untold damage that would come if NAFTA were not ratified. Ross Perot, who ran against both Bush and Clinton in the general election, led a campaign against ratification by Congress. The Clinton administration pulled out all stops, with Vice President Gore debating Mr. Perot on national television. In the end the NAFTA treaty passed the House vote (since it involved revenue through changes in tariffs) as well as the Senate.

Just like the Clinton administration, the Trump administration backed off on its pledge to ditch NAFTA. We have a new NAFTA, to be sure. But NAFTA continues. But China is the new Japan, the lightning rod of all that is wrong with U.S. trade and U.S. participation in the global economy.

To understand the issues, I address two fictions: China as a currency manipulator and the severity of the U.S. international position.

China as a Currency Manipulator

Attacking China as a currency manipulator is common to both parties. Most recently Treasury Secretary Steven Mnuchin cited the misaligned exchange rate as a reason for the tariffs. This is not just partisan rhetoric. In the past, both Hillary Clinton, as a U.S. Senator, as well as Charles Schumer called for tariffs in retaliation for the unfair value of the Chinese exchange rate against the U.S. dollar.

A weak currency functions much like a tariff: foreign goods become more expensive for domestic residents, so demand will shift toward domestically produced goods. The only difference is that a weakened domestic currency does not bring in tariff revenue. The Trump administration calls for China to strengthen its currency (which is the same thing as the U.S. weakening its currency against the RMB), so that Chinese will have more purchasing power to buy U.S. goods, since they are now cheaper, and Americans, finding Chinese-produced goods more expensive, will buy more of their own goods.

While this idea is simple and straightforward, there are many fallacies and fictions involved in this argument that the misaligned Chinese exchange rate is at the root of global trade imbalances.

There are many fallacies and fictions involved in the argument that the misaligned Chinese exchange rate is at the root of global trade imbalances.

The first is that it is very hard to find the degree of misalignment of any currency against another. What is the right value of the Chinese currency against the U.S. dollar? One long-standing measure is the use of the Purchasing Power Parity index. In this approach, the price of traded goods, adjusting for tariffs and transportation costs, should be the same under the correct exchange rate across countries. Thus the Economist magazine publishes routinely the Big Mac index. This index gives the price of a quarter-pounder Big Mac across the world, calculates the implied exchange rate given the local currency costs of the quarter pounders, and compares the implied Big Mac exchange-rate index with the market index.

The problem with purchasing power parity approaches like the Big Mac index is that there may be different demand factors for Big Mac’s across the world. The Chinese simply may not like the Big Mac the way Americans do. Similarly, we have to remember that the Chinese economy is a highly distorted one, in terms of administered prices. For example, there is one price of energy for Chinese households, another for foreign households, another for domestic firms and still another for foreign firms. The price structure and the ability of prices to reflect underlying true costs of production are not the same, so we cannot make easy comparisons between the United States and China. Trying to find the “right” exchange rate based on price comparisons of goods across countries like the United States and China is like looking for a needle in a haystack. So it would have to be through a miraculous insight if somehow Secretary Mnunchen knew the right value of the RMB against the U.S. dollar.

Making Chinese imports more expensive through a stronger Chinese currency or U.S. tariffs will increase the cost of production of American firms.

Another fallacy in the debate about our currency values is that the brunt of international trade is in intermediate goods for production rather than for final consumption. Thus, making Chinese imports more expensive through a stronger Chinese currency or U.S. tariffs will increase the cost of production of American firms using component parts made in China.

Increasing trade frictions with China (almost like going to a trade war) over ideas about the misaligned exchange rate is a misguided venture with high costs for U.S. manufacturing and employment, with a lose-lose outcome.

The United States has been running trade deficits and is officially a net debtor nation. However, there is one important international account which is overlooked. On the interest account, the United States has been running a steady surplus for decades. So the United States runs large deficits, is a net debtor with the rest of the world, but receives net positive interest payments from the rest of the world. As Professors Stephanie Schmidt-Grohe, Martin Uribe and Michael Woodford, of Columbia University, point out in a forthcoming book, it is as if any one of us had a large credit card debt and we were receiving interest payments from the credit-card company, rather than making interest payments to the credit-card company.

So the question arises: How can the United States be on the receiving end of interest income if it is a net debtor country with continuing trade deficits?

One answer is the Dark Matter hypothesis, put out by Ricardo Hausman of Harvard and Federico Sturzenegger, former head of the Reserve Bank of Argentina. This idea posits that official balance of payments accounts underreport the extent of United States assets held abroad. Some of the assets are intangibles, such as brand names like Disney or Big Mac. But the idea is simple: For the United States to be experiencing net positive interest income, its net foreign asset position cannot be negative. There are large vast amounts of unreported foreign assets held by U.S. residents.

The key lessons are that it is a misguided venture to increase trade frictions with China over a presumed misaligned exchange rate. Indices based on purchasing power parity are either trivial or wrong but irrelevant for finding the right exchange rate between two countries. The other point is that U.S. trade and international asset statistics do not give the full picture of the U.S. international position. There is more to the story than what we see and read in an official balance-of-payments account. It would thus be foolish to increase trade frictions based on the fictions of misaligned exchange rates and U.S. official accounts.

There is one final twist to the trade story. As China has enjoyed large export balances with the United States over the years, rather than have its container ships return empty, Chinese shippers would routinely purchase industrial waste from the United States, mostly plastics and scrap metal, for recycling in China, not in the most environmentally friendly ways. More recently, however, China has greatly reduced and will soon ban its importation and recycling of most of our waste products. While this is a disruption of global recycling, and thus another trade friction, in the longer term it can only be good news, as the United States will be forced to reduce its industrial waste and find environmentally safer ways for recycling here at home, since the easy waste-disposal export to China is no longer an option.

This is hard to follow. My guess is that it is an anti-Trump article and would not have been written if a Democratic president was in office.

Also the author fails to talk about the theft of intellectual property by the Chinese.

Exorbitant Privilege means we can borrow trillions of dollars at low interest rates from countries like China. Call the interest payments IB. But also in the world economy the US owns assets much less than the trillions which we borrow but receive returns at higher rates than we borrow. Call the amount received IR. Currently IR>IB so the net is a positive for the US and somehow does not show up in any official statistics. Supposedly this is helped because the dollar is the international currency. The only problem is that these two accounts are not related to each other and there is no reason why IR should be greater than IB. It could be the other way around.