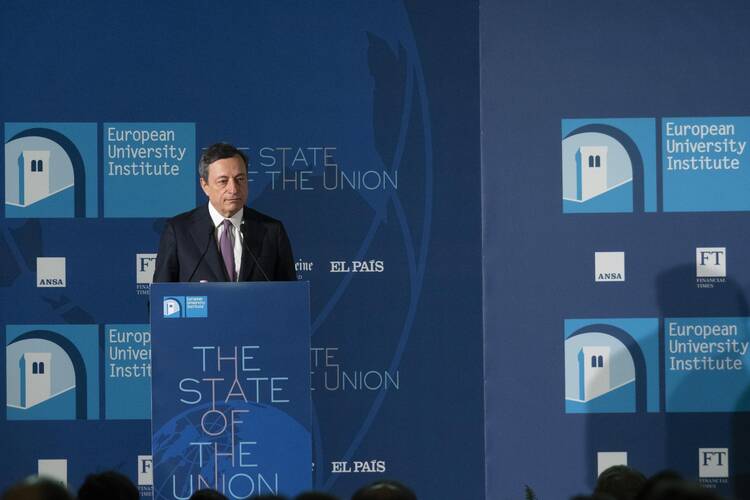 Mario Draghi, President of the European Central Bank, delivers his speech during the State of the Union conference organized by the European University Institute in Florence, Italy, Friday, May 11, 2018. (Claudio Giovannini/ANSA via AP)

Financial markets have been in turmoil, stock markets are up and down. Should we worry? Of course, the very concept of a market is to let prices adjust to supply and demand. However, we live in a world of learning, of less-than-perfect foresight and rationality. Over-inflated stock prices can lead to over-borrowing and highly speculative investment in other markets, especially residential and commercial real-estate sectors of the economy. We have seen the damage that boom-busts episodes have done to the world economy over the past decade.

Since the onset of the 2008 global financial crisis, central banks around the world have been taking a deeper interest in financial-sector supervision and financial stability. Prior to this, most financial supervision was done by independent agencies outside of the central bank. In the United Kingdom, for example, the Financial Services Agency supervised banks and financial institutions of varying types. In Europe, each member country, with different laws and accounting systems, took charge of the supervision of their banks. All of this has changed. The Bank of England and the European Central Bank have taken over the roles of banking supervision, drastically increasing their payrolls and scope of work. Among major countries, only the Bank of Japan has kept the traditional role of setting monetary policy for price stability while leaving banking supervision to another sector.

In the United States, by contrast, banking supervision has been divided among three agencies: the Federal Reserve system, the Office of Comptroller of the Currency and the Federal Deposit Insurance Corporation.

The changing structure of central banking, of course, has pros and cons. Once institutions become very large, do they necessarily become more efficient? In most countries the central bank has to write the check when there are banking crises; should not these institutions that have to pay for crises have the job of forestalling such crises by supervision?

Much of this aggregation of central banking duties after the global financial crisis is akin to the consolidation of intelligence and security after 2001, with the formation of the Department of Homeland Security and the office of the director of national intelligence. Time will tell if bigger and more centralized institutions will be more effective for financial stability as well as for national security.

Time will tell if bigger and more centralized institutions will be more effective for financial stability as well as for national security.

Bigger central banks may be one solution. But is this not like shuffling deck chairs on a boat in a rocky sea? Another way is to reimagine monetary policy. Since wild movements in the stock market engender either irrational exuberance (in the form of overborrowing and dicey investment) or pessimistic debt-deflation cycles when shares are falling, why should the FED not target the overall share-price index? Professor Roger E.A. Farmer, of Warwick University, formerly of U.C.L.A., has formulated this idea as the FED II Proposal. Given that we are less-than-rational creatures and that wild movements in the share market have spillover effects in wide sectors of the economy, why not set a target zone for the growth of the overall share price index? Mr. Farmer’s idea is that in the long term the growth of the share price index should reflect the underlying trend rate of growth of the economy. The FED can target this rate of growth for the overall index, plus or minus a few percentage points. When the index growth rate drops below the lower limit, the FED simply buys shares from an index fund; and when the growth rate exceeds the upper limit, the FED sells shares in the index fund.

Some would object that such an intervention by the FED or any central banks in private equity markets is another example of encroaching government control of a competitive market. However, there is precedent. The Troubled Asset Relief Program (TARP) during the global financial crisis was an example of the central bank buying assets of non-bank financial institutions. Usually, such bailouts of non-bank institutions, such as the Chrysler Corporation bailout of the 1970s, came through the Department of the Treasury with the approval of Congress.

There is another example, even more compelling. Joseph Yam was the governor of the Hong Kong Monetary Authority at the onset of the Asian crisis in 1997. The Hang Seng Index came under attack, as investors started selling shares all over Asia, even though the fundamentals of the banking system in Hong Kong were sound. Yam intervened in the share markets in Hong Kong, reversed the falls in the Hang Seng Index and stabilized the economy of Hong Kong. Yam is one of the heroes of central bankers in Asia.

The reality is that risks among markets and across countries have become increasingly connected. The central bank can no longer confine itself to the conduct of setting monetary policy for price stability and serving as the lender of last resort for commercial banks. Risks originating in non-bank financial markets matter for the economy as a whole. Central banks around the world are becoming bigger and bigger, for sure. But are they becoming more effective? Perhaps they need new operating procedures or instruments, such as a target zone for the share market.

A strange article for a religious magazine. Certainly an important topic but recommends a radical increase in power for a new quasi government organization while saying bigger is not better. Agree on latter.

One obvious flaw, stock market is not supposed to reflect current economic activity but future activity/profits. That's what investments are about. Stocks are investments.