Romero House: A place to call home for refugees in Toronto 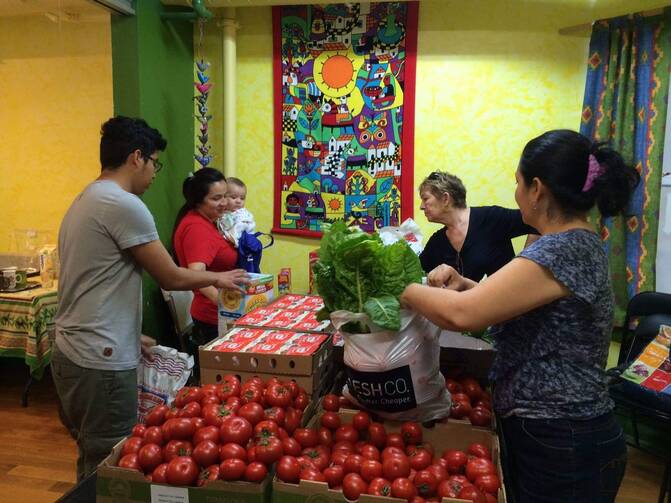 In contrast to its neighbor south of the border, where record lows in refugee resettlements are being recorded, Canada registered 47,800 asylum claims in 2017, more than doubling the 2016 figure, according to the United Nations. Since the Liberal Party won a majority in the federal government in Canada, there has been a sizeable increase in refugees coming to the country. That increase has stressed the public infrastructure that processes, houses and resettles refugees.

Many asylum seekers have been housed in hotels or shelters, even as private groups are prepared to help them adjust to life in Canada. In downtown Toronto, however, inspired by the life of a freshly canonized saint, another model has been operating for over 25 years. At Romero House, refugees not only find services, support and shelter as they adjust to life in Canada, they also live in community with staff and interns, sharing meals, struggles and successes.

Started with only one building in 1991, today Romero House is made up of a network of four houses in the same neighborhood. Doors are not locked inside the living quarters, based on an understanding of shared hospitality and seeing refugees as neighbors rather than “clients.”

At Romero House, refugees not only find services, support and shelter as they adjust to life in Canada, they also live in community with staff and interns, sharing meals, struggles and successes.

“Our team has a schedule,” says Mary Jo Leddy, one of the founders of Romero House. “We start each morning with prayer. We do the readings of the day.” Resident families are invited to join together for meals. A nice break from the sometimes chaotic checklist residents must run through to win formalize transitional living status, the communal meals also make a daily point of reconnection.

Most refugees stay at Romero House for one year. Interns and staff accompany individuals and families as they adjust to life in Toronto, going to appointments with asylum seekers, getting winter clothing with them and helping them learn how to navigate Canada’s largest city.

“When we first came here, we felt alone,” says one of the residents, who had been a journalist in Egypt before coming to Canada. “It’s not just about getting food or a house. They want us to join a common community. Now we don’t feel alone or strange.” Since coming to Toronto, she has been exploring the many festivals that take place throughout the city, most recently a Santa Claus parade.

“Our whole family here is very supported,” says a mother from Colombia who lives at Romero House with her husband, two children and a grandchild. She and her husband left good jobs in Colombia and are working on learning English, so they can try to start new careers in Toronto.

Residents say one of the most difficult things about adjusting to their new life is not having a regular job. “My wife is pregnant, and I’m thinking about the future,” says a man from Eritrea who is working on getting a license to be a driver for car services in Canada.

“It’s not just about getting food or a house. They want us to join a common community. Now we don’t feel alone or strange.”

Romero House runs smoothly in part because of volunteers like Harold Wright, who has been working there for nine years after retiring from his job as a high school chemistry teacher. Every Wednesday, Mr. Wright answers phones and coordinates internship applications from all over the world.

“I’m not a big activist or anything like that,” says Mr. Wright. “This is like a family.” When he was a teacher, many of his students were refugees, and his church has been a sponsor for refugee families.

Past residents also volunteer, like Karla, who came to Romero House from Mexico when she was 17. Her mother, stepfather and brother came first. Karla tried to stay in Mexico herself but could not escape criminals who were pursuing her family.

When she got to Canada, she says her fear was replaced by the “magic” of her new community. She made her first Communion there. “People always ask me what I think of Canada, and my first image is always Romero House,” she says.

Tembeka Ndlovu has been the assistant director at Romero House since the beginning of the summer. She says there is no routine story for a refugee’s journey in their community. For some refugees, Romero House is the first contact with life in Canada. Others come after living in a shelter or landing elsewhere in the country. “Some come in with their refugee IDs already; some come in with just their suitcases,” she says.

Though Ms. Ndlovu joined the staff at Romero House only recently, she is well-acquainted with the life there. She came into Canada from Zimbabwe in 2005 as a refugee herself. Romero House was her first contact; she lived in the community for almost two years.

“Romero House really focuses on community.... I think it’s something that is really lacking. The way that people live now, it’s easy to find yourself without any kind of community.”

Interns, who commit to programs lasting for a summer or a year, are responsible for different weekly tasks, like collecting and distributing food or fundraising. They are also paired with a family or multiple families as companions.

Claire Kingston has been an intern at Romero House for two months. She had already studied issues related to refugees in an academic setting, but she wanted to engage those issues “in the real world.” The shape of the life here, too, was attractive. “Romero House really focuses on community, in terms of the way that we live here. That really spoke to me, and I think it’s something that is really lacking. The way that people live now, it’s easy to find yourself without any kind of community.”

Along with finding her place in the community, Ms. Kingston is also starting her journey with a family. “They arrived at Romero House around the same time I started out. We’ve been spending a lot of time together. Seeing the whole process, doing it with them, there’s a parallel there for me with them settling in.” She says they have grown close in the short span of time they have spent together.

Lucas Driediger, another intern, is now in his second year. “You don’t really get into something brand new in just a year; you’re still learning how it works.” To have the greatest impact, he says, “it’s important to come back, I think.

“Families stay with us for a year, so if someone came in November of last year I would see them come in, but not transition out. To see the full cycle of them being here is important.”

With a year’s experience, Mr. Driediger says accompanying families the way that Romero House does is both rewarding and challenging. “There was a family last year that I worked closely with. At times it was very difficult, at times very rich. You see every side of someone’s experience. You see their resilience and their fragility.”

It can also be hard to see families leave after spending so much time together, but Mr. Driediger says it feels good to see former Romero community members become more independent.

The community also serves walk-ins looking for assistance. Ms. Kingston and Mr. Driediger greet them on Wednesdays as part of their weekly duties. “We help them with whatever they need. We don’t have a list that says this is what we do, this is what we don’t do. It’s very organic and person-based,” says Mr. Driediger.

Toward the end of the year for residents, the interns and staff help them find a place to live, a challenge in a city like Toronto where affordable housing is in short supply. Landlords, says Ms. Ndlovu, are not always keen on having tenants who might not yet have full-time employment, even if they have a housing allowance from the government.

Amid these challenges, Ms. Ndlovu emphasizes that Romero House does not try to solve problems for refugees as anonymous cases to supervise but tries to accompany them as individuals. For example, Romero House provides translators for those who need them, and they accompany refugees as they call and visit potential rentals.

In addition to logistical challenges for refugees, Toronto, despite being known as one of the most multicultural cities in the world, is not always welcoming. A hotel in nearby Scarborough where many refugees are housed has been the target of malicious attacks online, and in October a gas can was set on fire on the hotel’s third floor. Police believe it may have been an act of arson.

That makes the hospitality of Romero House all the more essential. After refugees move out of the community, they are still offered help and services, and they return for parties and celebrations. Regardless of what happens beyond the four houses, refugees have a family to come back to. As Ms. Ndlovu likes to say: “Once a Romero, always a Romero.”

Romero House primarily serve refugee claimants who are newly arrived in Canada. They provide transitional housing as well as settlement support, often times supporting newcomers as they navigate the refugee process, including preparing for their refugee hearings as well as other applications. I am very happy to read this blog and thought of sharing my point of view here. Keep up the good work. www.essayjaguar.com/

Saint Oscar Romero is an inspiration for our times.