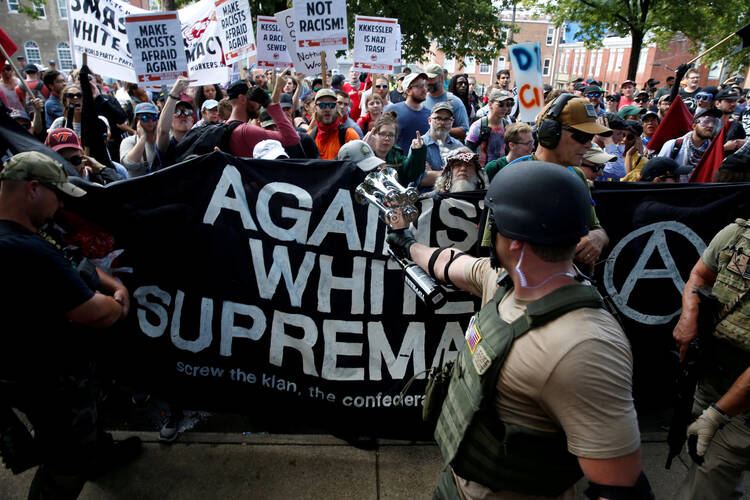 White nationalists are met by a group of counter-protesters in August 2017 in Charlottesville, Va. “Antifa” groups are trying to prevent similar scenes in Canada. (CNS photo/Justin Ide, Reuters)

Canadian far-right groups have been, thankfully, less visible than their U.S. counterparts, but some individuals girding up for a resistance to them see a potential for dangerous fringe ideologies to spread in Canada. Street violence has been associated with anti-fascist groups—“antifa,” as they are commonly known—but at its core Canadian anti-fascism seeks workable strategies to stop further growth of the Canadian far right.

“Antifa is not a group,” says Coraline Le Moyne, who works with Action Antifasciste Montréal. “It is an objective.”

Putting it that simply diverges from some media portrayals of anti-fascism as a group of hooligans looking for a fight. “People see the tension and get confused by all the messaging, of whether [anti-fascism is] violent or nonviolent,” says Ms. Le Moyne.

She says that the violent narrative is usually told by people who “haven’t shown up” to confront the far right and white supremacist movements.

Following the election of President Donald Trump, the United States has seen an uptick in rallies, public speeches and organizing from its far right. Mr. Trump’s populist message struck a chord with white supremacists and groups like the Ku Klux Klan and neo-Nazis, even while the president has, at times, tried to distance himself from those groups. That chord has resounded beyond the borders of the United States.

Alexandre Bissonnette, a young man in Quebec who killed six and injured 19 in a shooting at a Quebec City mosque in January, was enthused by Mr. Trump’s presidency and the analogous bid for the French presidency by Marine Le Pen. Mr. Bissonette was known to repeat far-right talking points online.

Quebec’s far right has been expanding, especially targeting the province’s Muslim community. English Canada, too, saw a spike in planned white nationalist rallies, particularly following the deadly events in Charlottesville, Va., in August when a white supremacist drove a car through a crowd of protesters, killing one and injuring 19 others.

Just as the far right has been organizing across borders, so has its opposition. Mr. Trump’s election and policies like the U.S. travel ban targeting Muslim-majority countries have energized people to take action. The National Day of Action Against White Supremacy and Islamophobia brought thousands into Toronto’s streets. That effort, in turn, led to the founding of SAFE, or Solidarity Against Fascism Everywhere.

Christian Peacemaker Teams (C.P.T.), perhaps best known for its work in the occupied Palestinian communities on the West Bank, is a member of the SAFE coalition. “Ultimately, Jesus was anti-fascist,” says C.P.T.’s Rachelle Friesen. “I think his struggle was spiritual, but also very political, in terms of standing up to empire, speaking against empire. To me, it would be a natural fit for Christians to get involved in [anti-fascist organizing].”

“To me, it would be a natural fit for Christians to get involved in [anti-fascist organizing].”

Ms. Le Moyne is not new to confronting white supremacy in the streets of Montreal. As a young woman, she was part of Montreal’s punk scene, where she came toe-to-toe with racist skinheads in the ’80s and ’90s. “To be a racist skinhead, to be in their gang, they had to beat a black person, so they were always searching for some black people to beat,” she says. “So we started to clean up Montreal, if you will.”

“We thought we won,” she says, after it seemed as though neo-Nazis were no longer openly walking the streets. Then came the controversial Quebec Charter of Values, legislation in 2013 that banned government workers from wearing conspicuous religious symbols and face coverings. Critics say the proposed law was a direct attack on Quebec’s Muslim community.

The charter was not adopted, but Ms. Le Moyne, who has converted to Islam since her punk days, says the proposal “gave the right to racists to express themselves. Since 2013, it’s been really awful.”

On Oct. 18, Quebec’s Liberal government passed Bill 62, banning face coverings not only for workers in public sectors, but even for people using public services, like riding the bus or going to the library.

Could Canada be the next country with a right-wing populist insurgency?
Dean Dettloff

Anti-fascists have come under scrutiny in Canada, as in the United States, because they have been associated with a sometimes violent response to far-right groups. “The question of violence is often a loaded one,” says “Mike” from Toronto Against Fascism in an email to America. “Violence isn’t a protest tactic, it’s a tactical means of shutting down fascism,” he writes—what he considers as “essentially an act of self-defence.”

“When an organization [like Canada’s far right] is calling for the mass incarceration, expulsion or extermination of a group of people,” he explains, “using whatever means that are necessary to defeat their ability to organize, recruit and grow is essentially defending the people.”

“The thing is, speaking for myself, I never use violence. It’s really not my thing, and I’m kind of an old lady,” says Ms. Le Moyne. But she says she also understands the violence that sometimes happens during public confrontations.

“On social media, the fascists make some death threats, racial slurs; they’re writing to us in private to tell us, ‘See you at the next protest, I’m going to tear your hijab off your head.’ [At the protests,] we’re really angry because the people who told us we are going to die there are in front of us.”

“I’m not for the violence,” she says, “but if someone is doing a Nazi salute, to me it means, ‘I’m proud that Hitler killed a good number of Jews, I’m proud to be a racist.’” Some may react violently to a provocation like that, she reasons, “because the Nazi salute is more violent than any slap in the face.”

Ms. Le Moyne says the loose organizational structure that makes up many anti-fascist groups also means there will be different responses to the hate encountered at protests. She argues that the actions of individual antifascists are their own responsibility, not a reflection of the group.

“I’m there in a completely nonviolent role,” says Ms. Friesen about her participation with antifa efforts. “Everyone who I work with knows I’m in that role. But there are people in SAFE that believe in a different kind of tactic.”

Acting as the nonviolence witness in anti-fascist settings for a Christian Peacemaking Team member is no different, says Ms. Friesen, than similar work the group does in conflict zones like Palestine or Colombia. “When things start to go violent, the best role we can play is to start documenting things more intensely. Generally, the violence coming from white supremacists or even the police is quite severe in response to what is happening in terms of the expressions of anger. So we see ourselves doing this work as we would with any other partner or group that is struggling for freedom.”

Could Canada be the next country with a right-wing populist insurgency?
Dean Dettloff

Daniel Joseph, a member of SAFE, says that despite headline-grabbing “Nazi punching,” most of the work done by anti-fascist groups is a matter of building relationships between communities and raising awareness. “What we’re actually out there doing on the streets is handing out pamphlets, telling people what’s going on. You reach a couple people, and that’s good,” he says.

Sometimes anti-fascists even reach members of the far right peaceably, says Ms. Le Moyne. “There are people who used to be racists and fascists who are fighting with us now because we took an evening or a whole week of speaking to them, in private or on Facebook, teaching them.”