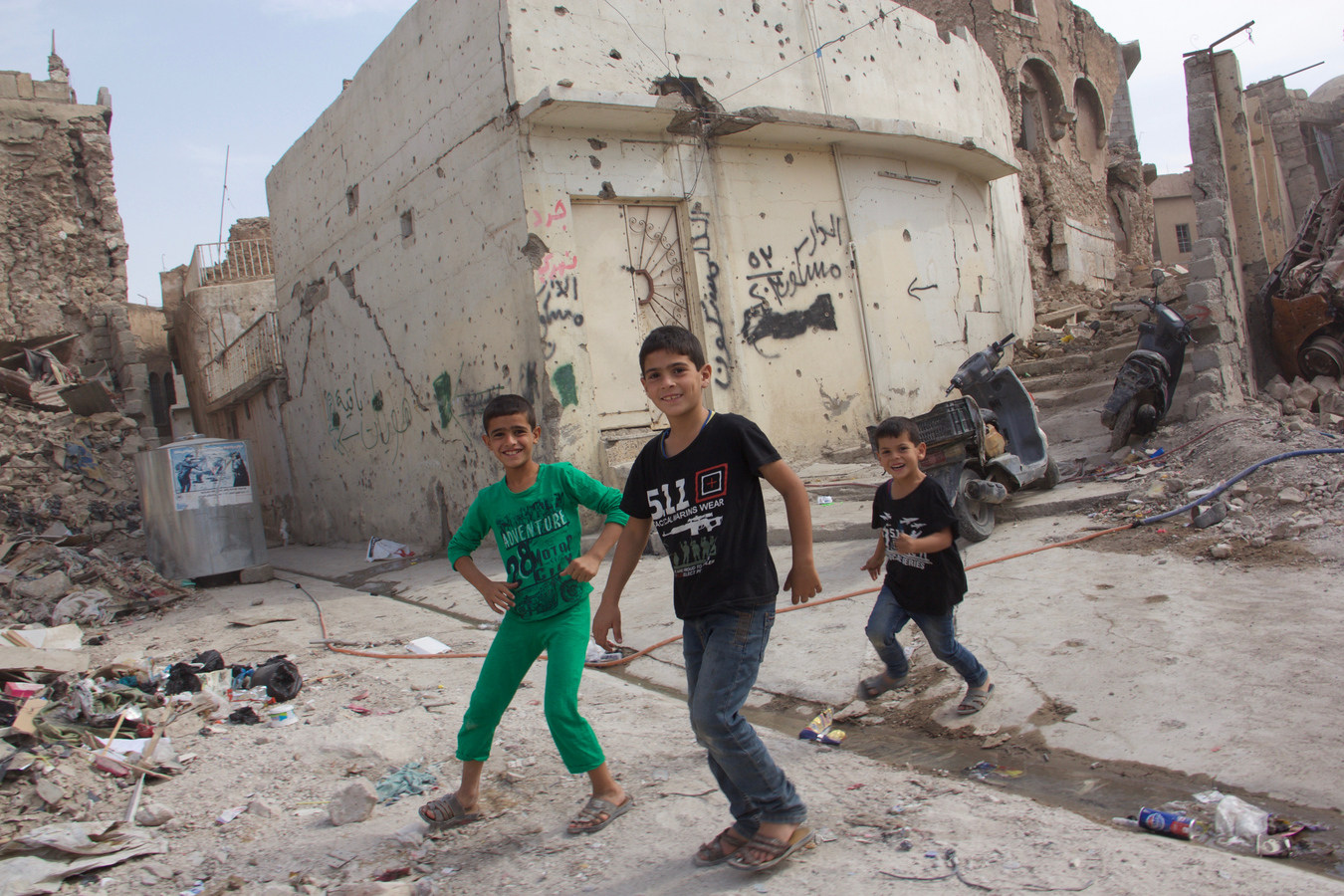 Around us the rubble of West Mosul throws a fine white dust into the air that coats your clothing and grits your hair, covers your shoes and camera lens, and gets into just about everything else. I find myself briefly wondering what percentage of my newly acquired coating of Mosul particles represents vaporized human remains. But people were not the only things destroyed in this part of the Old City of Mosul, in northern Iraq.

Just a few blocks away, centuries of Muslim, Chaldean, Syriac Orthodox and Catholic and Armenian places of worship are now little more than piles of debris and gravel and dust. Some ornate door arches remain as depressing reminders of the church architecture that used to stand here, a clutch of faiths located together in the Old City. The church arches had already been defaced by ISIS militants with bullet blasts meant to remove crosses and other Christian symbols even before the walls around them were demolished by mortar rounds or U.S. and Iraqi air strikes. Of course, a spiteful ISIS in retreat did its best to destroy what it could, so who did which damage to what here is hard to say. The view from the collapsed roof of the Syriac Catholic Cathedral of the Immaculate Conception (also known as the Church of Al-tahira), parts of which date back to the seventh century, is especially disheartening. Though the sounds of hammers, cement mixers and construction saws at work rise to the roof of this broken church, the perspective it offers is one of utter destruction in all directions.

Centuries of Muslim, Chaldean, Syriac Orthodox and Catholic and Armenian places of worship are now little more than piles of debris.

In the alley before the ruins of the Immaculate Conception church, a pile of satellite dishes, cable boxes and computer innards block the stairs to the collapsed roof. My impromptu guide to West Mosul, Yohanna Towaya, a professor at a branch of the University of Mosul in the Christian community of Qaraqosh, explains that ISIS had removed them from homes to prevent residents from accessing local and international television, then simply dumped the high-tech material accessories of modern life into the ancient church yard. He has made many trips into Mosul since its liberation from ISIS and considers his visits completely safe. “These people are Iraqis; I know them,” Mr. Towaya says. “The trouble came from outside,” he adds, referring to the largely foreign composition of ISIS fighters.

Just the night before I had been visiting with a regional security expert in Erbil, who went on at length about the dangers that awaited in Mosul. Among them: snipers, IEDs (improvised explosive devices) and Daesh—as ISIS is referred to here—sleeper cells looking for opportunities to kidnap Westerners.

He said the United Nations had recorded scores of “security incidents” over the last month in the city and area surrounding it. Two air strikes had been required; ISIS tunnels continue to be uncovered and weapons stashes are discovered.

“Who told you that ISIS is finished in this area?” he asked. “It is not; ISIS is reorganizing itself.” Its members have shaved their beards and melted back into the community, he warned. Whole villages around Mosul remain under ISIS control; their wives and children live in West Mosul, of course they are going back there, he said. “We are still finding bodies and booby traps…. Even the police can’t guarantee your safety.”

It was enough to guarantee a more or less sleepless night.

Now I am sitting here among strangers, Sunni Muslims who have returned to the gray dusty ruin of West Mosul to start over, and unbelievably I am sharing a small glass of sweet Iraqi tea with them on what is mostly a desolate block of near-collapsed buildings. Along this former commercial corridor, a scatter of small shops have reopened in breakouts of color among the gray and black of the blasted, burned-out storefronts.

The tea shop owner and his patrons seem legitimately happy to have an American among them, Westerners have become a rare sight in this part of Mosul, and residents are keen to show what hospitality they can muster under the circumstances. The shop owner opens a tap affixed to his alley wall to demonstrate that his business has been reconnected to the municipal tap water system. The tea he serves is hot and delicious and sweet well beyond the American palate.

Westerners have become a rare sight in this part of Mosul, and residents are keen to show what hospitality they can muster under the circumstances.

The old men here seem happy to linger over their glasses while the young men drink up and move along, more business presumably to attend to somewhere else. Remembering my conversation last night, I find myself wondering who they are dialing on their cellphones as I finish my tea.

This location, the shop owner tells me, had been used as a storehouse for ISIS weapons. His old tea shop was located down the street but had been too badly damaged for him to consider reopening. The former ISIS munitions dump, however, makes a good restart for him. He manages about 10 customers during my visit.

One is a young man from the Red Crescent Society, a humanitarian organization, eager to practice his English. Solane Ghazi explains that most of the people at the shop live in the remnants of what had been their homes. “This man’s house,” he says, pointing to one of the guests at the tea shop, “was eradicated completely.”

Mr. Ghazi is eager to send a message to the international community, imploring it to step in more vigorously to rebuild Mosul. Just about no one here—or for that matter anywhere else I have visited in Kurdistan or Iraq—has any confidence that the Iraqi central government has the capacity to respond to the challenge of rebuilding the city.

“They are poor people here,” Mr. Ghazi says. “They don’t have water; they don’t have enough money. Because of the destruction they have nothing, no food, no electricity.”

Mr. Ghazi was born and raised in Mosul. What has befallen his city is an utter disaster, he says, but he insists he has confidence that West Mosul can be restored.

“Of course,” he says, with a smile and a shrug. “When the people gather together and put their hands to work in Mosul, there is nothing impossible here.

“But it needs the people gathering their hands together. It needs schools, it needs hospitals—all of these things.”

Despite his enthusiasm, it is hard to imagine how anyone is surviving in West Mosul. Indeed, even the optimistic Mr. Ghazi only works in the dust and ruin of West Mosul; he hangs his hat on the other side of the Tigris. East Mosul has been largely spared of the destruction visited on this side of the river, and life proceeds there much as before with one glaring difference—with the exception of a handful of families, virtually the entire Christian community has departed and most Christians are convinced that is impossible to ever return to live in Mosul.

Mr. Towaya grew up in East Mosul but now lives, as do scores of other former Mosul Christians, in Qaraqosh. The city is itself rebuilding after fierce fighting to reclaim Qaraqosh from ISIS left much of it in ruin. He believes there are as few as 10 Christian families who have returned to Mosul on either side of the river, “and none of them with their children.” While many former residents have returned to check on their former homes, few, so far, express any desire to live here again. The consistent refrain is: “We can’t trust them again,” referring to former neighbors who sided with ISIS when the Islamist militants stormed the city or who joined in the looting and destruction of Christian churches and homes.

“When people see that there is a priest in Mosul, I think people will think about returning.”

Still, Mr. Towaya holds out his own hope for the restoration of Mosul’s Christians despite the many challenges and the overall economic and political gloom of contemporary Iraq. “One couple moved back and they did not have to cook a meal for weeks,” he says. “So many of their old [Muslim] neighbors were so happy to see them, and they just kept bringing them meals.”

He believes that if the church can come back, the people will follow. In West Mosul, the Old City had been the focus of the community’s ancient spiritual life. It is hard to have much optimism there.

But here in East Mosul, we come upon a surprising site. It is Father Amanoel Adel Kloo, a Syriac Catholic priest who has dropped by to check on the reconstruction of his East Mosul church, Our Lady of the Annunciation. The old church building had been completely destroyed by ISIS and in its place is rising a prefab worship space that Father Amanoel intends to surround with a rectory, a caretaker’s home and some residences for Christian students who are attending the University of Mosul.

These students are coming from all over Nineveh to resume their educations, but getting home at night has become a perilous obstacle course of checkpoints and barricades manned by Iran-backed Shia Hashd al-Shaabi militia, the Iraqi army and Kurdish Peshmerga as local and regional powers vie for control of Nineveh. Better for their safety and their educations that they have a place to stay in Mosul, he explains.

Father Amanoel was the last priest to escape from Mosul in June 2014 as ISIS took over and in fact, was briefly detained by militants as he departed. He is not sure why they let him leave. That awful night several sisters and orphans traveling with them were abducted by the militants, he says. Now after years serving his displaced community in Erbil and Dohuk, he becomes the first priest to return to Mosul. “I will be the cross for the people,” he says. His church will be open to all Mosul Christians who return, he says—Orthodox, Chaldean, Syriac Catholic, ready to serve all. On an exterior wall of the compound he points out some graffiti left behind by the church’s former occupiers: “Christians, the church is the property of ISIS.”

“When people see that there is a priest in Mosul, I think people will think about returning,” he says. Is he not a little bit frightened to be the city’s only priest? “When you have faith nothing will affect you,” Father Amanoel says. “I see the hand of God in everything.”

Perhaps even in a small glass of sweet tea.

Iraq Diary -- for a historical perspective suggest a reading of "Al Baghdadi" -- complete copies of which are contained in the Fordham and Boston College Libraries. Of course, the time frame is almost 100 years ago and chronicles the Jesuit educational mission in Iraq in the 1920's. They had some pretty remarkable comments about the physical strength of the Kurds.