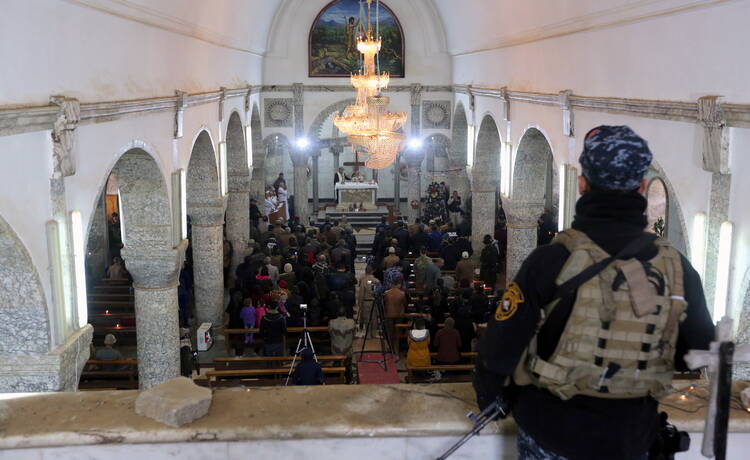 Time is running out for the Christian communities of Iraq’s Nineveh plains. Deeply shattered by years of dislocation and violence at the hands of Daesh, as ISIS militants are known in the region, thousands of Christian families have begun the costly and difficult task of rebuilding their homes, churches and civic and religious institutions—all had suffered degrees of destruction, from the merely serious to absolute ruin, during the three years Daesh rampaged through the province after its lightning seizure of Mosul in June 2014.

Now with Daesh on the run in Iraq, those same Christian communities face a new threat as Kurdish Peshmerga forces and Iraqi government troops backed by Shiite militias square off across the province. In some instances, hostile brigades are just kilometers apart on either side of the Christian communities that had just begun reconstruction.

This stalemate between the Iraqi central government and the independence-leaning Kurdish Regional Government is the greatest obstacle to a successful reintegration of Christians in the province, according to Stephen Rasche of the Nineveh Reconstruction Committee. Speaking at the United Nations in an information sharing conference sponsored by the Holy See Mission to the UN on Nov. 30, he said the standoff “has carved Nineveh in half and made towns in which we need to work inaccessible.

“Moreover, the economic viability of the region and its ability to sustain recovery efforts is being halted due to the inability of its inhabitants and workers to travel between towns.” Because of the growing uncertainty generated by the Kurd-Iraqi conflict, several communities “now lie open to the real risk of inhabitation by others from outside, thereby creating new sources of potential violence and conflict.”

Archbishop Bashar Matti Warda, the Chaldean Catholic archbishop of Erbil, agreed that the current standoff in Nineveh represented yet another existential threat to the province’s Christians. The Christians, he said, along with Yazidis and other religious minorities, had become perhaps the greatest victims of the political and sectarian conflict between the region’s Sunni and Shia Muslims over the last three years. “Christians paid a huge price for these disputes,” the archbishop said. “We cannot bear another collateral damage. Time is not on our side.”

But in a small indication of how difficult unraveling that confrontation may prove to be, the Iraqi Ambassador to the United Nations bluntly rejected the notion of a separate and independent Kurdistan in northern Iraq. “Iraq should be one Iraq and Iraq should remain united,” Ambassador Mohammed Hussein Bahr al-Uloom said. “And the Iraqi people proved this in the struggle against Daesh.

According to the ambassador, the struggle against Daesh exhausted more than $100 billion and the conflict left behind $130 billion more in damage. This is a burden, he said, that the Iraqi state cannot be expected to shoulder alone. Defeating Daesh—which he described as transitioning from a military to an ideological struggle—is the responsibility of the world community because it means the protection of the entire international community.

But the threat of renewed violence is just one of the challenges standing before the restoration of the ancient Christian community in Iraq. Millions will be required for the physical reconstruction of these devastated villages and neighborhoods. Archbishop Warda pointed out that the Christians of the region have so far had to rely on the support of Christian aid groups. Aid to the Church in Need, the Knights of Columbus and Caritas Internationalis have already directed millions to the effort to sustain Nineveh’s Christians and other minority groups and to begin the rebuilding.

The work is meant not only to restore Christians communities but to revitalize the role of Christians in Iraqi society as a mitigating and bridge-building force among the nation’s diverse ethnic and religious communities. “Restoring and maintaining pluralism and diversity in the Nineveh Region is essential to defeating ISIS ideology that sought to eliminate religious and ethnic minorities from their so-called Caliphate,” said Edward Clancy, director of outreach and evangelization for Aid to the Church in Need-USA. His organization will be among the international Christian and Catholic aid organizations that will be directing significant resources to Nineveh over the coming months and years.

“If they are again to become a vital part of a diverse Iraqi society, Christians will need help from the international community,” he said. “They will need the economic and political support of institutions like the United Nations and the major countries of the West.”

He added, “We must keep leaders to their promises and their responsibilities. Action is needed now or the Christian community which has been present in Iraq for nearly two millennia will become a historical footnote.”

“One positive outcome that has followed the genocide by ISIS,” said Archbishop Warda, “has been the denouncing of their tactics by the entire world community—Christians, Muslims and others. Now it is time for action as well as words. Not only the West but Islamic countries as well, who have been affected by the terror of ISIS’ ideology, must commit resources to sustain pluralism in Iraq as a manifestation of their opposition to this ideology of hatred and genocide.”

“Crucial for preserving pluralism and diversity in the Nineveh Region that was overrun by Daesh is that we seek to return to survivors, as much as possible, what Daesh pillaged from them,” Archbishop Bernardito Auza, the permanent observer of the Holy See Mission to the United Nations, told the gathering. “This means ensuring the conditions for them to return to their places of origin and live in dignity and safety, with the basic social, economic and political frameworks necessary to ensure community cohesion. It means doing more than the indispensable work of helping them to rebuild homes, schools and houses of worship, but also to rebuild society by laying the foundations for peaceful coexistence.”

Toward that ambition of restoring Nineveh’s Christians and rebuilding sustainable civic and economic institutions for them, the Vatican has thrown its support to the “Return to the Roots” project. That fundraising effort is being coordinated by the Nineveh Reconstruction Committee with the help of Aid to the Church in Need and the Knights of Columbus.