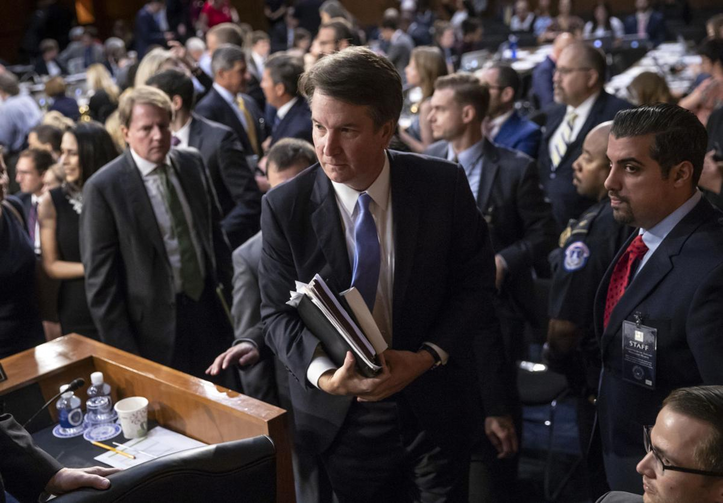 The Senate Judiciary Committee continued an at-times-raucous confirmation process for Brett M. Kavanaugh, President Trump’s nominee to the Supreme Court, on Sept. 6. Since hearings began on Sept. 4, they have been marked by daily interruptions—in the audience and from the dais—something Professor Richard Garnett of the University of Notre Dame Law School regrets. “Our confirmation practices and norms have been degrading steadily for the past quarter-century, since the Judge Robert Bork nomination, and it is hard to see a way out of the current partisan morass,” he said in an email to America.

Controversies over documents related to Judge Kavanaugh’s employment as an associate White House counsel and later White House Staff Secretary during the George W. Bush administration upended the first day of the process. Many documents were withheld from senators as “confidential” and 42,000 pages of other documents were released to senators just hours before testimony began on Sept. 4, provoking a fiery partisan fracas.

Sporadic protests have disrupted each day of the hearings so far. One man yelled, “This is a democracy, not the mafia,” as he was dragged out of the hearing room on Sept. 5. Senator Charles E. Grassley, Republican of Iowa, scolded Senate Democrats on Sept. 5 for the previous day’s disruptions: “In the audience, 70 people were arrested yesterday who were following their lead.”

The first round of questioning that day lasted well into the night. The second round continued into the evening on Sept. 6 after the morning became mired in questions about access to and confidentiality of documents.

Sister Simone Campbell, the executive director of the Network lobby for Catholic social justice, does not like what she has seen so far. She told America that it is “quite disappointing that even when asked a very direct question, [Judge Kavanaugh] doesn’t respond.”

A letter signed by Sister Campbell and 1,550 other Catholic faith leaders was released before the hearings began. It called for senators to consider Judge Kavanaugh’s nomination with respect to five areas: health care, immigration, labor rights, voting rights and the death penalty. It also urged U.S. Catholics to prioritize the real-world implications of judicial appointments.

“As Catholics, we believe that any government official—including a Supreme Court Justice—must be concerned with the needs of people who are marginalized, not just the rich and powerful or a member of one’s own political party,” the letter writers said.

Judge Kavanaugh replied that Roe v. Wade is an “important precedent” and “has been reaffirmed many times over the past 45 years.”

Pressed by Senator Lindsey O. Graham, Republican of South Carolina, on revisiting prior rulings, the judge said, “I listen to all arguments.”

Pressed by Senator Lindsey O. Graham, Republican of South Carolina, on revisiting prior rulings, the judge said, “I listen to all arguments.”

On Sept. 6, Senator Ted Cruz, Republican of Texas, asked about the case Priests for Life v. U.S. Department of Health and Human Services, in which the judge penned a dissenting opinion that would have allowed employers to exempt themselves from providing contraceptive coverage. “Under the Religious Freedom Restoration Act,” Judge Kavanaugh explained, “the question was first was this a substantial burden on their religious exercise, and it seemed to me quite clearly it was.”

Labor and immigration issues also featured prominently as the senators grilled the Supreme Court candidate. Democrats charged that Judge Kavanaugh’s judicial opinions and commentary reflect judgment that is outside the mainstream, while Republicans argued his record underscores his “independence and impartiality.”

Senator Richard J. Durbin, Democrat of Illinois, mentioned Agri Processor v. National Labor Relations Board, a case against an Iowa wholesaler of kosher meat that came before Judge Kavanaugh during his time on the United States Court of Appeals for the Washington, D.C., circuit court. The company employed hundreds of undocumented immigrants who experienced “12-hour shifts without overtime pay, exposure to dangerous chemicals, sexual harassment and child labor.” The majority opinion said that Judge Kavanaugh’s dissent, which held that Agri Processor’s immigrant workers should not be allowed to unionize, would lead to an “absurd result.”

Mr. Grassley said that Judge Kavanaugh rules “for the party that has the law on their side” and that he “will vindicate the rights of those who are less powerful in our society.” He cited a case in which the judge ruled for a union against Walmart on the grounds that the company had engaged in unfair labor practices.

Mr. Garnett wrote in an email to America that “senators’ behavior and misleading charges are miseducating Americans about the role of the court and the job of a judge.”

“One of the biggest mistakes people make about the court, and about justices, is thinking that the characteristics of the parties in a case should determine the court’s ruling,” he said. “Judges are supposed to evaluate legal arguments, not litigants.

“I cannot speak to the merits of the Agri Processor dissent,” Mr. Garnett said. “Judges dissent all the time, of course, and the fact that, in a particular case, a majority disagreed with Judge Kavanaugh tells us nothing about Kavanaugh’s intelligence, experience or qualifications.”

Judge Kavanaugh detailed his volunteer work with Catholic Charities’ St. Maria’s Meals program in Washington, D.C., and his membership on the board of Washington Jesuit Academy.

“We are all God's children. We are all equal,” he said. “People have gotten there because maybe they have a mental illness; maybe they had a terrible family situation; maybe they lost a job and had no family. But every person you serve a meal to is just as good as me or better.

One line of questioning concerned Judge Kavanaugh’s employment in the Bush White House and broached issues like torture and mass surveillance. Asked by Senator Patrick J. Leahy, Democrat of Vermont, about “warrantless surveillance,” Judge Kavanaugh said: “There was so much going on in the wake of Sept. 11…. There were so many issues to consider for the president and for the legal team.” He said several times that “every day for the next seven years was Sept. 12, 2001.”

Mr. Durbin charged that Judge Kavanaugh lied during his 2006 District Court confirmation hearing when he said he “was not involved and am not involved in the questions about the rules governing detention of combatants.”

The Senate next will question a number of legal experts, some of whom support and others oppose the judge’s nomination.

Brandon Sanchez is an O'Hare fellow at America.

There is only one thing the Democrats care about and that is abortion. Hearings provide opportunity for Democrats to show how amazingly civil they are when opposing anything. The author left out Senator Booker's most elegant moment on Judge Kavanaugh's racist comments. I wonder why.

Sister Simone Campbell should be petitioning congress not a judge about marginalized people. Judges interpret laws not make law.

They can use all the legalisms they want for thirty hours straight to tell you that they "don't make laws,but interpret laws", but when abortion was illegal and now it's legal,when gay marriage was illegal , but now its legal,when Plesy v. Ferguson was once the law of the land , but now the Brown decision is, etc., etc., it's because the Supreme Court's "interpretation" of "law'" is defacto ; making laws. The Constitution is like the Bible ; it can be interpreted to mean anything you want it to mean; judges "follow precedents", [ Kavanaugh's mantra] except when they choose not to.

the Bible has a logic to it ( understood via the Catholic tradition, n the Magisterian)

these confusions, as u note, are result of arrogance

Republicans are SOOOO much more caring. They care about helping rich people, giving tax breaks to corporations, making sure immigrants don't get fair--or even humane--treatment, stripping black people of their voting rights, and oppressing women. What a record of caring to be proud of!!! Way to go with Kavanaugh!!!

They care about helping rich people

Why do most of the rich and the elites vote for Democrats? Just about everything you say is nonsense. I hope you are not teaching anyone with these biased erroneous opinions.

Professor
For an academic you have an unusual propensity to catagorize, engage in broad sweeping allegations, and reach "conclusions" , actually just accusations, without citing any facts. You then proceed to engage in a guilt by association attributing all of the foregoing to Kavanaugh who is a judge honored by his profession (See the ABA's Highest Endorsement) and as to whom you also fail to recite a single fact to support your shabby "hit and run".

As usual AM writers view an issue from the left and obscure the reality of what many of us listened to for many hours and came away with a different point of view.

There is only one thing that the republicans and the male hierarchy care about and that is abortion. Control women. Produce offspring. There is nothing sacred or holy about their decisions. The whole "pro-life" solution is about punishing women and doctors regardless of their situation. There is no care about children after birth. It's all about pregnancy and then there's the double standard of allowing men to "sow their wild oats" regardless of the consequences ...because the consequences are just for women and children. This is wrong.

You are so right! And, they are hypocrites- we already know that they have no problem with abortion when their mistress/girlfriend find themselves compromised and need an abortion..

"Brett Kavanaugh, introduced himself to the country with the preposterous falsehood that “no president has ever consulted more widely, or talked with more people from more backgrounds, to seek input about a Supreme Court nomination.” Even if Kavanaugh were not a post–Bill Clinton convert to the belief that the president is above the law, his decision to ritually debase himself before the president who selected him is an act that should end any fantasy that Kavanaugh possesses the necessary personal integrity to hold the position, let alone to defend the constitutional rights of Americans from a government determined to strip them away." https://www.theatlantic.com/ideas/archive/2018/09/redemption-court/566963/

Sister Lea
Since you consider your quoted material to be "a preposterous falsehood" you must be able to readily demonstrate exactly what other Supreme Court Nominee was ever picked with more people from more backgrounds consulted.....please do so.
Of all the attempted accusations thrown at Judge Kavanaugh by his opponents, none of them has had the temerity to attack "his integrity" either as a judge or as a person.
Your referenced article in the Atlantic is all of a piece with all of the Atlantic's many assaults on Court decisions it disagrees with. In that article The Atlantic, as usual, must struggle mightily and ineffectively with its chosen political party's past adherence and sponsorship of racial discrimination in its effort to unpin that tale from the Donkey.

slavery was lawful, then changed
settled law is a red herring

A Fielder
2 years 7 months ago