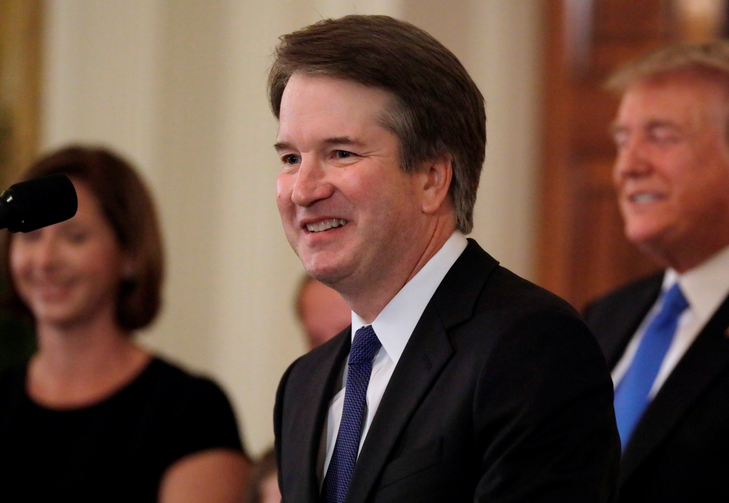 Political name-calling is at least as old as democracy itself, so it is not surprising that Republicans and Democrats alike are fond of using the word hypocrite to vilify each other. In ancient Greece the word hypokrites denoted an actor—literally, “an interpreter from underneath,” who spoke lines from behind a dramatic mask.

This usage accurately describes politicians and commentators of all stripes who proclaim scripted propaganda designed to stir up their base rather than foster reasoned analysis. The accusations and speculation surrounding the nomination of Brett Kavanaugh to fill the Supreme Court vacancy left by Justice Anthony Kennedy’s retirement is a good example of staged political theater. A basic understanding of the judicial appointment process is essential to distinguish fact from fiction.

The Constitution provides that federal judges, ambassadors and many other federal officials be nominated and appointed by the president with the “advice and consent” (confirmation) of the Senate. This bifurcated appointment process was created “to check unexamined and unfettered appointments.”

The Judiciary Committee
Judicial confirmations are initially controlled by the Senate Judiciary Committee and its chair. There is no set time frame for the confirmation of nominees and, as was the case with President Barack Obama’s nomination of Merrick Garland to the Supreme Court, the committee can deny confirmation by refusing to act. Ordinarily, the committee immediately begins the vetting process by gathering information regarding a nominee’s personal and work history, financial dealings, speeches and publications. The Department of Justice often assists a nominee with the completion of disclosure requests. It has been reported that as many as 100 attorneys will sort through Judge Kavanaugh’s voluminous public record and relevant confidential correspondence.

Senate Majority Leader Mitch McConnell would like Judge Kavanaugh sworn in by Oct. 1, the date the court begins its new term; this is ambitious but not impossible.

The pre-hearing stage also includes courtesy calls (office visits) from the nominee to interested senators. The hullabaloo surrounding these courtesy calls has added to the drama of the Kavanaugh nomination, but it has detracted from substantive revelations regarding Judge Kavanaugh’s jurisprudence. Interested nongovernmental organizations, such as the American Bar Association, also assess judicial nominees. The A.B.A. bases its analysis on “professional competence, integrity and judicial temperament” and rates nominees as “well qualified,” “qualified” or “not qualified.” In 2006, when Judge Kavanaugh was appointed to the U.S. Court of Appeals, the A.B.A. gave him a “qualified” rating, which drew fire from Republicans who questioned the organization’s neutrality.

Senate Majority Leader Mitch McConnell would like Judge Kavanaugh sworn in by Oct. 1, the date the court begins its new term; this is ambitious but not impossible. Mr. McConnell’s cancellation of the customary August recess leaves the Senate with time to consider the nomination. Democrats oppose this schedule as they want more time to review documents from Judge Kavanaugh’s years in the George W. Bush administration.

The Hearing
After the initial investigation is completed, a public hearing will begin. Nominees, with the assistance of Justice Department attorneys, practice extensively for this hearing and rehearse responses to likely questions. The hearing length is determined by the Judiciary Committee chair, but each committee member is given equal time to ask questions. Justice Neil Gorsuch’s 2017 hearing lasted three days, for a total of 20 hours of questioning.

During his 2006 confirmation hearing, Judge Kavanaugh said: “I believe very much in interpreting text as it is written and not seeking to impose one’s own personal policy preferences into the text of the document. I believe very much in judicial restraint, recognizing the primary policy making role of the legislative branch in our constitutional democracy.”

The word “abortion” does not appear in the text of the Constitution, which makes it less likely that Judge Kavanaugh would recognize it as a constitutional right, but it is not certain that he would vote to overrule Roe v. Wade when first given the chance. Judicial restraint implies a hesitancy to overturn established precedent; the court is more comfortable whittling away at previous rulings before acknowledging they were wrongly decided.

Although abortion is the primary (or only) legal issue important to some Americans, it is likely the court will be called upon, perhaps in the near future, to decide many essential questions, including the breadth of presidential power. Judge Kavanaugh is particularly familiar with this area of law as he was a member of Kenneth Starr’s independent counsel team that recommended the impeachment of President Bill Clinton.

Since that time, Judge Kavanaugh has questioned the legitimacy of independent prosecutorial investigations into presidential misconduct. He has suggested that sitting presidents should not be subject to civil and criminal proceedings and has an expansive view of a president’s authority as commander-in-chief. This means that impeachment and removal from office by Congress is the only undeniably constitutional mechanism for stopping a president, who, in Judge Kavanaugh’s words, has committed “dastardly” acts.

Judge Kavanaugh is an intelligent and competent jurist. Unless previously undisclosed foibles come to light, he will become the 114th justice to serve on the U.S. Supreme Court.

Judge Kavanaugh favors strict separation and delineation of powers between the three branches of government. His body of work suggests that he thinks administrative agencies, often considered the fourth branch of government, exert too much independent power. This is understandable from a strict constructionist perspective as the Constitution established only three branches of government, but his interpretation undermines the legitimacy of vital health and safety regulations and is likely to draw intense scrutiny during his confirmation hearing.

Senators also will want answers regarding his work for President George W. Bush and whether Judge Kavanaugh misled the Senate in 2006 when he said he did not have knowledge of the Bush administration’s authorization of torture, illegal wiretapping and the uncloaking of C.I.A. operative Valerie Plame.

Once the public hearing is concluded, the committee usually meets in executive session to discuss any confidential or classified material that cannot be publicly disclosed. The committee then votes and reports to the full Senate whether the nomination is viewed favorably, unfavorably or submitted without recommendation.

Senate action
Once the Judiciary Committee submits its report, the full Senate debates the nomination and votes on whether or not to confirm the nominee. Until 1917, any senator could filibuster to prevent the Senate from voting on a president’s judicial nominee. In 1917 the Senate adopted Rule 22, so that a filibuster could be stopped (through a process called cloture) by a two-thirds vote of the entire Senate. In 1975, Rule 22 was amended to permit cloture with a mere three-fifths vote (60 out of 100 senators).

Over the years, senators from both parties have used the filibuster to stall or block confirmation of numerous politically unpalatable, but objectively qualified, judicial nominees. In 2013, Senate Democrats, who held a slim majority and were frustrated by perceived Republican obstructionism, “re-interpreted” Rule 22 to permit a simple majority to end confirmation filibusters for all but Supreme Court nominees.

The Editors: Anyone who recognizes the humanity of the unborn should support the nomination of Judge Kavanaugh.
The Editors

In 2016, the Republican-controlled Senate blocked proceedings on President Obama’s nomination of Merrick Garland to the Supreme Court, even though he was a moderate many Republicans previously supported. In retaliation, Democrats filibustered President Donald J. Trump’s 2017 selection of Neil Gorsuch to fill the seat denied Judge Garland; this caused Republicans to expand the 2013 Rule 22 re-interpretation to permit a simple majority of the Senate to confirm Supreme Court nominees. Thus, Justice Gorsuch was confirmed 54-45, and Judge Kavanaugh will need only a simple majority of votingsenators to win confirmation.

Currently, there are 51 Republican and 49 Democratic senators. Republican Senator John McCain is fighting brain cancer and may not be well enough to travel to Washington to cast his vote, which must be done in person from the Senate floor. Mr. McCain’s presumed absence creates another wrinkle regarding Judge Kavanaugh’s confirmation. Article I, Section 5 of the Constitution requires a quorum (a simple majority of 51 of the Senate’s full complement) before it can hold a vote.

With Mr. McCain absent, 49 Senators could act in concert and creatively invoke Senate rules to stall, but not prevent, all Senate action. It is unlikely Democrats will resort to this delaying tactic unless they think more time will help them sway Republican votes against Judge Kavanaugh.

Once confirmed by the Senate, the appointment process is completed when the nominee takes the oath of office.

Judge Kavanaugh is an intelligent and competent jurist. Unless previously undisclosed foibles come to light, he will become the 114th justice to serve on the U.S. Supreme Court. While politicians and pundits focus on current controversies, now-unimagined scientific discoveries and geopolitical challenges will emerge during the lifetime tenure of a young (53 years old) newly appointed Supreme Court justice.

The Supreme Court is a co-equal branch of government that plays an essential role in preserving the rights of the people; each appointment to the Court has enormous ramifications, but our nation’s future should not be determined by any one person. All Americans should consider the federal oath of office and promise each other that we “will support and defend the Constitution of the United States against all enemies, foreign and domestic.”

I would agree with the general description of the legal process of confirmation. However, Americans ought to be far more concerned about issues other than abortion. Granted, abortion is an intrinsic wrong . But issues like freedom of speech and the press are more important. Kavanaugh's position on gun control, the limits of presidential authority among other issues ought to be deeply disturbing to Catholics and indeed all Americans. American bishops have convinced many that voting is a one note tune. Unfortunately, that position serves neither Catholics nor Americans well. Voting is an entire symphony and we need to weigh all of the issues before casting that ballot.

They are after his wife now. Looking for dirt? NY Times and Associated Press want to examine wife's life as city of Chevy Chase administrator.

In the current political climate, Judge Kavanaugh's view that the president should not face indictment for crimes or even investigation of them makes him unsuitable for the Supreme Court. Trump is choosing a judge likely to dismiss his treasonous history.

Lisa
I guess that means Justice Ginsberg must recuse/disqualify herself from any issue involving Trump since she publicly stated she could not even imagine Trump being elected and if it happened she would move to New Zealand.
Further it is existing Justice Department policy , memorialized in a memo in July 2014 (under the Obama Administration) , that it would be unconstitutional to indict a sitting President. As such the disqualifying issue you pose for Judge Kavanaugh simply does not exist and could not ever even reach the Court.